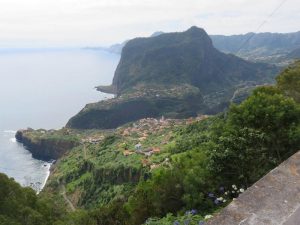 Have a look at Dianne Parslow’s article about her 2017 holiday in Portugal (pdf).

Dianne and husband Graham started their holiday in the Autonomous Region of Madeira in the north Atlantic Ocean before travellng through some of the main towns of mainland Portugal: Coimbra, Lisbon, Porto and Sintra.

Many gardens in Nillumbik feature the Pride of Madeira (Echium candicans) plant, with its unique blue flowers with red stamens. Now you know where it came from. 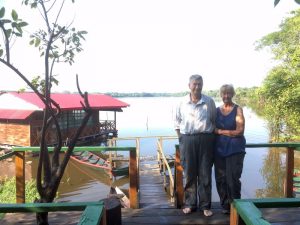 Have a look at a presentation of Pat Rhys-Jones' 2019 holiday in South American (pdf).

During their holiday, Pat and husband Les visited six countries, some of which you might not even have heard of: Brazil, Colombia, French Guiana, Guyana, Peru and Suriname. And, as you might guess, they had a great time.

Have a look at a presentation of Dianne Parslow's 2018 holiday in Alaska (pdf).

As Dianne says in her introduction, "Arriving in Anchorage was a bit of a shock, it was like stepping into a cold version of the wild west. The airport, hotels and restaurants are all decorated with stuffed animals, animal heads or antlers. Taxidermy is alive and well up here. We also had some difficulty understanding some of the accents and making ourselves understood. Even so everyone is very friendly." 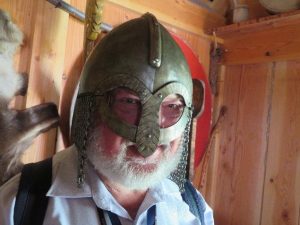 Have a look at a presentation of Dianne Parslow’s 2019 holiday in Norway (pdf).

Here are some of the places that Dianne visited: Bergen, Flåm, Kragerø, Lofoten Islands, Lysefjord, Oslo, Sognefjord, Tromsø and Trondheim.

The photo is of Dianne’s husband, Graham, going native. 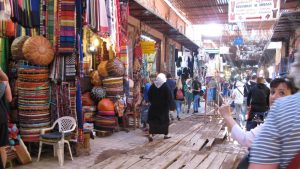 Have a look at a presentation of Dianne Parslow’s 2018 holiday in Morocco (pdf).

Dianne begins her story by saying “It is hard to know where to start when describing our trip through Morocco. The sights, sounds, smells and experiences were diverse and fascinating.” and she end it by saying “Our 10 days were full of different sites … all in all it was an amazing experience.” In between, she gives lots of photos and vignettes. 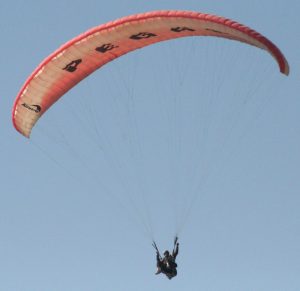 I thought it was paragliding not parasailing I'd signed up for but … what the heck!

We rattled up a rough, narrow excuse of a road with impossible hairpin bends and steep drops either side. We all agreed we would do anything to avoid the return trip – even jump off a mountain.

My nerves impacted my bladder at a critical time. By the time I got out of the loo, the spunkier pilots had already teamed up with the other women, all younger than me. There was only one left, a stocky one – slower off the mark perhaps. His eyes fell when he realised he was stuck with me – almost literally, it turned out.

I could hear the other pilots speaking to their passengers reassuringly, giving them instructions in fluent English as they strapped them into harnesses. My pilot was silent and stony-faced as he fiddled, obsessively it seemed, with the harness. "What do I do?" I asked in a querulous voice, to break the ice. No response.

One by one, the others jumped off the mountain with their pilots. I raised eyebrows at mine. He just frowned and went on fiddling with the harness. He called someone else over. The two of them pushed and shoved me, conversing in animated Turkish. Repeatedly I heard a word that sounded like 'problem'. Perhaps we could just …er…call the whole thing off?

Suddenly, my pilot stopped fiddling and barked, "run!" I ran as fast as my jelly-legs would go. I heard, "now!" and stepped into the void. I think he had just exhausted the sum-total of his English vocabulary.

The thermals lifted us so high I thought my ears would burst. We spiraled and hovered and spiraled again over the unbelievable blue of the Aegean and Mediterranean seas far below. Is this what it feels like to be a bird?

By the time we landed, I was grinning broadly.

Later I asked our guide, "There's a Turkish word that sounds like 'problem'?"

Travelling around Bulgaria by train, we'd settled into a compartment with several strangers. The smiles they'd bestowed on us quickly froze as another man entered. They then beat a hasty exit. Curious, we watched him load his suitcase on the luggage rack above. As he reached, his jacket rose revealing a large gun in a holster at his waist. We sat motionless, in fearful silence, while the man observed us carefully and scribbled in his notebook. "Mafia?" I mouthed to my partner. We discovered later that he was, most likely, a member of the secret police. Members of the Bulgarian Mafia don't deign to travel by train, apparently.

A conductor arrived to inspect our tickets and – to my consternation – he also asked to see our passports. Mine was in my money belt, under my clothing, along with all the cash I'd brought for our time in Bulgaria – ATMs being in short supply – and my plane ticket. I tried to extract it without showing the man with the gun just how much cash I was carrying.

Later, I needed to go to the toilet – just a hole in the floor through which the track whizzing past below was clearly visible. Job done, I re-zipped my pants. Clunk! I examined the floor to see what had fallen. Nothing? Instinctively, I patted myself down. Bugger! My money belt was gone. I hadn't re-fastened it properly, in my haste to stuff it back out of sight. But where is it? My eyes lit on the hole. Oh no! Without much hope, I peered down. But there it was, lodged at the very bottom. Out of reach? Almost.

I gingerly extended my arm through the less-than-savoury hole and using a pincer action with my outstretched fingertips successfully retrieved my money belt. One false move or an ill-timed bump and my worldly wealth and only ID would have been deposited in the middle of a train track somewhere in Bulgaria. Plan B didn't bear thinking about.

It was three days before I could bring myself to confess to my partner. He was upset because he'd accidentally left his favourite fleece jacket somewhere. "Never mind", I said, "things could have been worse – much worse". 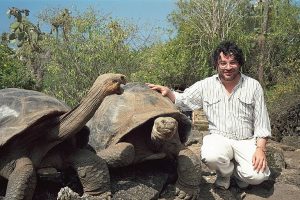 Have a look at the slides that Guy presented to our Travel class.

FWIIW ('for what it is worth'), here is Guy’s brief comparison between animal watching in the Galapagos, the Amazon and on safari:

We’d been trekking for five weeks. I was looking forward to a relaxing bus drive, followed by a shower and a comfy bed at a Kathmandu hotel.

The bus that arrived to pick us up was ancient – its tyres were polished smooth. I tried not to think about the steep drop to our left, as our driver skillfully negotiated the narrow mountain roads. I focused instead on the rhododendron bushes – shiny green leaves garnished with the occasional scarlet bloom.

Light snow began delicately frosting the green and red. It thickened and we were forced to stop and clear it from the road. At first, we tried just kicking it aside. Our cooks offered pizza tins to be used as shovels. We cleared a bit, drove a bit, cleared again. Progress was painfully slow but the work kept us warm. We implemented a system for calls of nature – men in front of the bus, women behind. The weather showed no sign of abating. Finally, the driver stopped the bus and announced, "I’m not going to drive any further. I don’t want to die!" Fair enough – we didn’t either.

Our Sherpa guides spotted a farmhouse deep in the valley below and we carefully picked our way down there. We were grateful for the dinner of plain lentils and rice that they shared with us. Eight of us stretched out top-to-tail on a hard wooden bed covered by a straw mat. It was too cold to sleep so someone found in their pack a large digital thermometer and placed it onto the sill of the glassless window. We amused ourselves by placing bets on how low the temperature would fall. It hung around minus four. I wondered where the couple who’d given up their bed for us were sleeping. I hoped they’d been well paid.

We resigned ourselves to the possibility of spending several nights there, but in the morning we were greeted by clear blue sky. We completed our journey uneventfully. We’d forfeited our night of luxury accommodation in Kathmandu but gained instead a precious glimpse of how other people live.

Note: A longer version of this article was published in The Age Travel section under the heading The Big Chill in 2005. 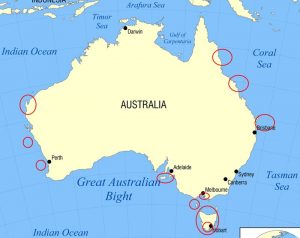 Did you know that there are 8,222 islands around Australia? That the largest three islands are Tasmania, Melville Island and Kangaroo Island? And that the smallest islands are Ashmore and Cartier Islands Territory (off Western Australia)?

Have a look at the slides that Dianne presented to our Travel class. 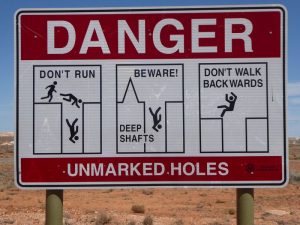 Guy Palmer recently went to Coober Pedy, which is in the middle of nowhere in South Australia. If you go to this link on Google Streetview, you will be standing outside the hotel that he stayed in. You can then walk around the town, just like Guy did, only virtually rather than physically.

Or, perhaps more simply, you can have a look at the slides that Guy presented to our Travel class.

FWIIW (‘for what it is worth’), here are Guy’s 6 main takeaways from his Coober Pedy experience: