An interview by Judy Vizzari in June 2019. 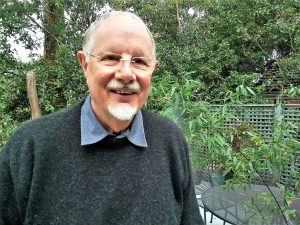 We tend to categorise people, label them – an accountant may be 'detail minded', a cook 'practical,' an artist 'creative' or a nurse 'caring.' But tagging doesn't really work – in life, each of us is guided by circumstance as well as ability and so, to survive, we're constantly adjusting, learning new skills and accepting new challenges.

Listening to the stories of our U3A members, I've heard about difficulties overcome and successes enjoyed and it seems that, while some have meandered down life's country lane, others have been running headlong through its busy streets. The 'ways' of living are many. We are all individuals with stories to tell, stories that demonstrate how we adapt to our circumstances. We are so much more than our label.

Today I'm meeting Mike Ormerod, a retired engineer. I've spoken to him by phone and read his CV, but I'm not prepared for the man I meet. My folly was that of reading 'engineer' and labelling him a man of systems and structures, a man who solves problems using maths, science and technology … that may be true, but he is also much more.

I knock on the door of his Eltham Hamish Knox home and am greeted enthusiastically by Mike and his dog, Jenni. Mike is a tall man of athletic build, bearded and balding and with a sunny smile. Sue, his wife, who is smaller but has an equally sunny smile and noticeable English accent, appears from their kitchen and adds her greeting – they strike me as relaxed and welcoming. Jenni, their German short-haired pointer, who is large and sleek, displays the same courtesy as her family.

Mike and I settle into soft seats in their rather grand lounge room with its high, vaulted ceiling. He begins his story.

The Ormerods – preserving history for the future

He was born and lived in Yorkshire in the north of England. He's fascinated by his family history which has been traced back to the 13th Century and he tells me that, whilst his ancestors do not appear to have been landed gentry, there's evidence that they were hardy and industrious. The knowledge of his family's past has engendered in Mike a keen interest in learning more, and he says that our U3A Genealogy class led by Jane Davies has been a valuable resource in his endeavours. He's also been inspired to record his own life for his children and future generations and, by his current tally, around 20 chapters have been written. There are, perhaps, more to come!

Mike's first love is music and, if it had been possible, he would have been a professional musician like his father. Mike started piano lessons when he was nine years old and much later, whilst studying engineering at university, he was still thinking about becoming a professional musician. However, he recognised that he didn't have the talent to perform as an international soloist so dropped the idea.

Still, music was and is his first love – he specialises in piano, but he plays trumpet and tin whistle too. He also loves choral singing, which has become an important part of his life. Musically, he describes himself as a "jack of all trades and master of none".

Music has followed Mike wherever he has gone and, as he reveals to me, he has gone to many distant and fascinating places. When he first travelled to Fiji to work, he purchased a clavichord to play during his time there. It was, he says, a great mistake as his instrument absorbed moisture in the hot and humid climate and he had to laboriously tune it every time it was played. Not to be overcome, he happened on a dusty, unused piano at the civic centre (an almost new Steinway 9 foot concert grand no less!), and arranged to play it during breaks from his work – a sweet memory.

He remembers the Fijians singing in church and says how impressed he was by their natural ability to sing in four part harmony. He was asked to judge a choral competition there, which culminated in a memorable kava (or 'grog') ceremony. Singing, he says, was initially difficult for him until he was taught by a young Ugandan classical tenor to sing using his diaphragm, rather than croaking out of his throat! Now, it's part of his life.

His other musical travel memories include jamming on trumpet in an Irish pub, Bubbles O'Leary, with a rock band of talented self-taught Ugandan and Congolese musicians.

Now, he's a member of a swing band and a recently-formed jazz sextet, and enjoys attending the Eltham 'Jazz on the Green' events. He's also a member of Ensemble Gombert, a respected chamber choir based in Melbourne and noted for its pure intonation and historic approach to choral music – on the day that I met him, the ensemble was set to perform at the Melbourne Recital Centre Salon, in the city, as part of their regular program. On the weekend of 7th to 10th June, they'll perform major works by Haydn and Mozart in the Woodend Winter Arts Festival, which is a four day feast of music and the arts at picturesque Woodend. This festival, which is a mecca for those with an artistic bent, has links to our own Montsalvat and is just a short trip from Melbourne.

We take a step backwards to the early 1960s, when Mike realised that further studies weren't an option for him having done badly in his school exams. He was freshly out of school at the age of 16 and unsure about his future, so turned to labouring and worked at his grandfather's brick factory. This was a time for him to mature, to consider his options and to plot a new path.

He eventually decided to return to study and focussed on engineering, but then he was immediately confronted by an obstacle: during the '60s, most local universities were reticent to accept mature age students. He did find one though, Durham University, which each year accepted several 'older' students. He enrolled into a Bachelor of Science (Engineering) course from which he graduated in 1969. Several years later he again returned to study and completed a Master of Science (Construction Engineering) at Leeds University, graduating in 1977.

By then, Mike was well set for a career in his second choice profession.

During his time at Durham University, Mike met and married Sue – who was studying for a degree in English Literature and Language. Little did either of them know of the adventures which lay in store.

The family, including their Fijian-born daughter, Jane, and son, Tom, who was born in Bath, England, have been 'on the move' for much of Mike's working life. Between 1969 and 2014, he worked as a consultant engineer on many projects in many developing countries. Amongst them – Asia (Vietnam, Laos, Nepal, Cambodia, India, Malaysia and Myanmar), Africa (South Africa, Uganda, Tanzania, Malawi and Zambia), Pacific islands (Papua New Guinea, Fiji, and Vanuatu) and our own island, Australia. His CV includes such notable projects as Nauru House, CUB Brewery, Herald & Weekly Times and Murray/Goulburn constructions.

So many stories to tell

I hear how Mike designed and supervised the construction of a Bird of Paradise podium for Pope John-Paul's visit to Mount Hagen in the Papua New Guinean (PNG) Highlands and how 150,000 attended the Pope's open-air mass in full traditional regalia. Later, in Bau, Fiji, Mike designed and supervised construction of traditional timber buildings for Queen Elizabeth's visit.

He recalled that, in PNG, he was instructed to make the podium for the Pope “out of steel, and strong” because, during a visit to Mount Hagen many years earlier, the Queen had been addressing a large crowd under a podium made from bush materials, when a violent storm suddenly developed. She had immediately dashed to the royal vehicle, through the downpour, holding down her skirt as the podium was blown away!

He talks of more serious times, like when he and his family were held at gun and knife point after attending a Carols by Candlelight event in PNG. Then, in Cambodia, barracudas became as dangerous as buried bombs or Khmer Rouge guerrillas, and, in Vietnam, he and Sue were monitored for spying by their own personal 'watcher'. In Indonesia, simply ordering a meal could be fraught with problems and, most recently, in Myanmar, his group were interrogated by police for being suspected of journalism.

Apart from these adventures, the Ormerods have seen amazing landscapes – the magnificent Himalayas in Nepal, Serengeti National Park, Victoria Falls in Zambia by helicopter, and the magnificent temples and pagodas in Myanmar.

The family have met many warm and friendly people, worked with them, lived with them, and learnt from them. Mike, in turn, has helped to provide them with roads, bridges and buildings. In passing, the family was also able to sponsor their Ugandan housekeeper's daughter to study at university.

Now, he has more time for his first love, music, and he makes good use of it – the grand piano, which sits proudly in its dedicated area between the dining room and lounge room stands testament to his interests. But as well as music, he enjoys cooking and shares the kitchen with Sue, does the handyman 'stuff' like repairing the timber on his deck, and he's an enthusiastic member of our U3A golfing group.

Life didn't take him where he had hoped it would during his youth, but it certainly led him and his family on a wild and merry dance. His is an adventure which could have a musical score. If you see him performing, or happen upon him around Eltham or Montsalvat, you may be lucky to hear more about his serendipity experiences.

Time has flown, I've been entranced by this man's story of an adventurous journey, the engineer who would have been a musician.