An interview by Judy Vizzari in April 2019. 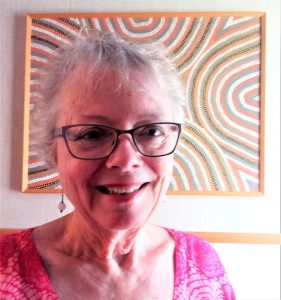 How can I describe Barbara Jackson? The words 'effervescent' and 'talkative' come to mind but, as I discover during my interview with her, she's also 'multi-faceted', with each facet an experience in her intriguing journey.

Who is Barbara Jackson?

It's one of those hot days we've been having lately – 34degC. We're sitting in Barbara's light-filled lounge-room with only a ceiling fan spinning to temper the outside heat, but it's still very pleasant in this space with its collection of artwork and memoirs of distant places. There's a smart looking digital piano, attesting to Barbara's love of music, and a bowl of seedless green grapes on the table between us. This smallish, fair-haired woman reclining on her comfortable couch and resplendent in colourful clothing is munching happily on the grapes.

There's a twist in this story – she starts by interviewing me, "Are you a professional writer? How did you get this voluntary job?" she asks, but in such an interested way that I'm charmed. It's obvious that she's a communicator, a 'people person', and I wonder at her background – what journey took her from local girl (she spent her youth in Templestowe) to the present and what events determined her path? And so we start her story.

Off 'the beaten track'

In the early 1980s, Barbara was confronted with an opportunity to change her life. Her father worked with indigenous people in the Northern Territory and it was during a visit with him that she decided that "this [outback Territory life] is for me". She heard through the CES in Alice Springs of a position available at Papunya, a small indigenous community roughly 240 kilometres north-west of Alice Springs, a place which was to become the home of the Papunya Tula art movement (dot painting) which is now known internationally.

The job, Health Services Administrator at the Lyappa Medical Service, presented an opportunity for her to leave her "boring" role as Branch Manager for Hotham Permanent Building Society in Melbourne. She applied and was surprised to be shortlisted and invited to travel to Alice Springs for an interview. It was, she says, a "very strange" job interview as the panel included indigenous and non-indigenous hospital and council workers who sat at opposite ends of the room in observance of separate spaces for women and men. She sat between them and twisted from side to side responding to a barrage of questions.

Barbara got the job … perhaps it was her easy manner and great communicative skills which impressed her interviewers. "It was", she says, "the Aboriginal people who chose me".

Before long, she was managing the repair of much more than broken hospital vehicles, equipment and hospital finances, she was also training Aboriginal health workers in Clinic admin and supporting indigenous initiatives.

This was a role that Barbara loved but eventually the medical service was disbanded by the government due to funding cuts. No longer employed, she returned to Melbourne.

We look at Barbara's collection of aboriginal paintings and artefacts, some bought and others gifted. Their warm tones provide a great backdrop to the stories she tells me of Australia's outback and its people, particularly Jacky Anzac, a charismatic Aboriginal stockman whose intellect and charm remains a constant reminder to her of those heady days.

Back in Melbourne, her path took an unusual turn – to Tattersalls, for whom she prepared Tatts agencies for sale. But the outback beckoned and soon she was off again – this time to Katherine, where she sold advertising for the Katherine Times. Her job there led to a stint as journalist for the Times with her own weekly segment called 'Katherine Croc', a role with a bonus: paid travel throughout the Katherine region.

Another turn brought her to rural Victoria, where she sold radio advertising, but soon she was off again, her destination Coonamble, on the way to Lightening Ridge in rural New South Wales. Once again she was employed by aboriginal people to work to manage the Community Development Employment Program within their community. It was, she says, a "fantastic" role.

Barbara, it seems, is a person who doesn't stay put. Her interest in people and ability to "get things done" has also led her to Vietnam and Cambodia, where she spent around 6 years working with people living in poverty.

Then, her thirst for learning and contact with Iranians in Australia inspired her to visit Iran, which she says was "a fantastic place. The Iranians were lovely, so welcoming and hospitable." She is currently volunteering with Baptcare Sanctuary, which provides accommodation and support to people seeking asylum in Melbourne, and with the Campaign Group of the Montmorency Asylum Seekers Group (MASSG).

Many U3A Nillumbikians will know Barbara as a tutor. Back in Melbourne and partially retired, Barbara joined Nillumbik U3A in 2013. She remembers that, upon joining, she was immediately invited to tutor a class and, ever the leader, she agreed.

Her first foray into tutoring resulted from her passion for supporting the poor in Cambodia. In 2013, and again in 2014, Barbara tutored two courses on Cambodia – Its History and Development. This was followed by a short course Asylum Seekers and Refugees – What Should Australia's Direction Be? which looked at the divergence of Australian responses and attitudes to people seeking asylum.

Her next foray into tutoring came from her experiences with Iranian asylum seekers and her fascination with the Middle East. These 2015 classes, aptly named, the Complexity of the Middle East, featured guest speakers from the Middle East and Iran. Barbara co-tutored these two courses with Cathy Guinness and Philomena Holman.

"I was a tutor, now I'm loving being a student"

Barbara is still a U3A member, but she's switched from tutor to student and is taking advantage of the many class choices we offer – now she's an enthusiastic member of the Monday Jazz Appreciation and she has also been seen wandering bush tracks along with our regular Walking Group.

Time for a break

Barbara and I found that we have a common interest – piano playing. She plays her version of Gerald Martin's 'Boogie One' and it's lots of fun. I'm impressed.

There's another interest we have in common, writing – she tells me that she is a member of a local writing group which was started many years ago by Lyn Hatherley. I reflect that her memory box must be overflowing – it is surely a great resource for her writing.

So who is Barbara Jackson?

So now I return to the thought that crossed my mind when I arrived an hour and a half earlier – who is Barbara Jackson?

What I have learned is that she's a woman who has sought change, welcomed diversity and benefitted the many diverse and needy groups with whom she has worked. She is also a woman who, after leaving school early, returned to study in her 30's and eventually graduated with a Bachelor Degree, Post Grad Diploma and a Masters in Community and International Development. Barbara is an adventurer, always keen to learn new tricks, a lover of music and the arts, a former Nillumbik U3A Tutor … and a fan of green grapes.

I've only touched on her accomplishments … but I've enjoyed learning this much. Having been given a glimpse of that memory box I wonder whether one day I'll hear more – perhaps through her writing?

And what does Barbara say about where she is in her life?

"I think I've finally hit balance", she says, "As well as an enjoyable social life, including jazz appreciation, I volunteer two days per week. I regularly play and practice the piano. I'm writing a story every week and reading a book a month in my Book Club. I exercise and do yoga. It's a great life and I'm very grateful that I have found the balance I've been seeking."

It sounds as though she's in a good place.