An interview by Judy Vizzari in July 2020. Dianne is our Course Coordinator and Vice President. 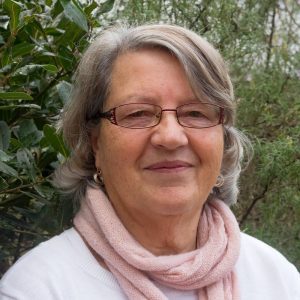 I’ve an appointment with Dianne Parslow, a lady whose name will be familiar to many of you. She’s Nillumbik U3A’s Vice President, a co-tutor of the Gentle Walking Group, an enthusiastic member of the Tai Chi Group and sometimes a valuable ‘office lady’. What I know is that she’s a tireless worker for our organisation, but what I don’t know is much about the person behind the name. I’m hoping to learn more about the Dianne we know less of.

Dianne and her husband, Graham, live in a 1944 red brick home which sits high on a hill in Lower Plenty, not too far from the Heidelberg Golf Club. As I navigate their long driveway, I see clues to Dianne’s story – the caravan parked undercover at the side of the house and the low maintenance, bushy garden both hint that they are travellers.

I knock at the front door and hear a noise from within but hesitate, not sure whether I’ve been invited to enter. There’s silence inside, then suddenly the door opens and a cheerful gentleman with white curls and quick eyes welcomes me. Inside, I see that my knock may have caused a moment’s grief as there’s a beautiful, old, radiogram topped with wires and balancing quite precariously on a hallway cabinet; Graham’s caught between politeness and care for his equipment whilst I’m immediately taken by the radiogram. Next, he’s proudly demonstrating that it, the radiogram, works.

I’m wafted into an unusual room. It’s small, maybe it was once a child’s bedroom but now the walls are lined with shelves which are bursting with a fantastic collection of mid-20th century electronic equipment – I see radios, radiograms and gramophones and am excited to find some ancient relatives of the Peter Pan radio which nightly filled our kitchen with the sounds of Hop Harrigan’s amphibious aeroplane so many years before.

As I stand there, Dianne arrives from outside, sensibly clad in a red parker glistening with droplets of water. She’s ready to talk so we leave Graham’s collection behind and make our way to her warm ‘country’ kitchen where she prepares coffee and tea.

In passing, we check out an extensive collection of artworks which has been accumulated during many trips within Australia and abroad. Every room and passage in the large house seem to contain paintings, drawings, prints and crafts from many countries – they are testament to Dianne and Graham’s travels and I look forward to hearing about the destinations they have visited.

Both Dianne and Graham have their own work rooms – studies, and in Dianne’s I find some clues to her character. Firstly, her large desk is neat and organised. On it there’s a computer keyboard with a sizeable screen as well as well-ordered papers and tools; indications of her industry and organisation.

Her ‘administrative hat’ appears to occupy a lot of time and energy but, within the room, there’s also an ironing board, a sewing machine and a bookcase. There’s a sense of multiple roles here, including housewife, reader and mother (the latter as evidenced by the family photos). The room is light and airy and there are lovely large windows which must allow for moments of reflection or, perhaps, escape. This is a comfortable room fit for many purposes.

Dianne tells me that, during her childhood in Adelaide, three generations of her family made many visits to a beach ‘shack’ (eventually her parents bought it) on the South Australian coast and her memories of that place and time remain strong. Amongst their friends were two artists who each painted a picture at the shack and one of those paintings remains on display in Dianne’s study. She nominates it as her favourite piece of artwork in the house. How often our past remains our present.

Now we, Dianne, Graham and I settle in a cosy front room near the kitchen, it’s time for Dianne to tell her story.

Dianne and Graham met at the University of Adelaide – they both enrolled into the Mathematics/Science Faculty and joined the students’ Science Association, of which she became Treasurer while Graham was President. Those years marked the beginnings of her adult life, her independence and her marriage, which occurred in 1978.

Although Dianne had enrolled into a Science Degree – she majored in Mathematics and Psychology and then later took on part-time studies in Education – she completed a Diploma of Education and entered the TAFE system as a statistics/mathematics teacher. Then, later, Graham’s work caused the family to travel to Queensland and it was there that she worked as an ESL teacher at Bond University’s English Language School. By the 1990s, the family were once again on the move, this time to Lower Plenty in Melbourne. Dianne commenced work at Holmesglen TAFE and, whilst there, undertook studies in Adult Literacy. Her range of abilities now qualified her to teach a diverse group of students and, she says, that this was the “most challenging” work she had encountered. Ever the student, she continued to study, this time a Masters Degree in Education.

During her working and parenting years (she has two sons), Dianne often volunteered her skills to many non-profit organisations. Amongst them were Encounter groups, Cubs and Scout Associations, a kindergarten committee and her sons’ high school (where she made costumes for annual school productions). Later, while working as an ESL teacher, she again volunteered her skills to support committees.

I ask why she gave her time so willingly she says that she saw a need and was able to fill it, “I’m not very good at doing nothing“, she says, “I always have an opinion or think I can help in some way. It’s just what I do“. She then observes that “there are invariably not enough people who stand up for things and if there aren’t then organisations don’t run properly and I can’t cope with that“. I ask whether she is a perfectionist and her firm but amused answer is “no” (and Graham concurred).

But there’s more to Dianne’s contributions than “helping to make things run smoothly“. She is particularly aware of the needs of the many single people, often women, whose lives are enriched by organisations which provide them with social, sporting and mental stimulation. 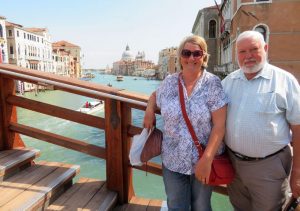 During those middle years, Graham’s work necessitated that he would travel overseas from time to time.

Dianne sometimes travelled with him and, since retirement, their trips have become yearly events. The destinations either Graham alone, or both have visited are many and include South America, Spain, England, Denmark, Japan, India, China and Taiwan.

Dianne’s cache of travel photos is large, Unfortunately, this year their plans to make two trips, one to the United Kingdom and the other to the Galapagos Islands, Patagonia and Antarctica, have been thwarted by the Covid-19 pandemic.

They have enjoyed many locations but nominate Milos, a small Greek island, as a favourite destination. Milos is less geared to tourism than many other Greek islands and one of which they have fond memories. There is a picture of that island on a wall in their home and Dianne remembers how, when they were renovating, an electrician saw it and asked where it was taken. They were surprised to hear that he was born on Milos – it was his home. Travel does seem to invite surprising and friendly connections and coincidences.

They tell me that their caravan provides a comfortable and easy way to travel. In it, Dianne and Graham have visited our coasts, interior and islands. See, for example, Dianne’s presentation of Islands of Australia that she gave to our Travel class.

An interest Dianne has developed during her retirement is writing. She shows me a folder containing a detailed account of her family history together with photos and tells me that she spent a lot of time working on this account, talking with her parents in their last months and discovering printed texts and publications which augmented those recollections. She also read several biographies to broaden her knowledge of that style of writing. What she learnt about her family was added to that sourced by another family member. Then, it was Dianne’s task to collate the book and to prepare it for publication. It seems that she did so in the same organised and efficient style that she applies to the rest of her life. Five or six copies of the finished book are soon to be printed and they will be kept by family members as valuable records for generations to come. 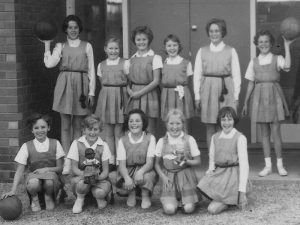 During this project she discovered amongst her memorabilia a photo of a basketball team with Dianne, aged 10, centre front. She recalls how she “played basketball/netball for over 30 years” – for church, school, university and various social teams and how, when she was 13, she broke her ankle and missed the whole season! “I was not happy sitting on the sidelines“, she says.

Dianne talks about her interest in writing biographies of the elderly, she says “I knew there were a few organisations around that did this and one day I saw a notice from Beyond Words, saying they were looking for more writers. Their clients are all in aged care and the service is free, although donations are welcome. I was looking for something to do outside of U3A that was more one-to-one and where I was not involved in running the organisation. I applied, had an interview, did four full days of training and then completed two biographies before the Covid-19 shutdown.”

She says that she finds it “most interesting and rewarding. You get an insight into someone’s whole life; they enjoy reminiscing and really appreciate the book at the end.” She adds, “I am not the only person in our U3A who does this.”

Searching for a Tai Chi class

We have almost come to the end of my visit, but I must ask my stock question; “Why did you join Nillumbik U3A?” Her answer is clear: “I wanted to do Tai Chi and found that U3A was offering it.” She went on to say that “about three months after I started it the woman who was running it resigned and “wonderful Lilia” stepped up to take it on“. She’s still a regular class member.

“Birds are my thing, too“ 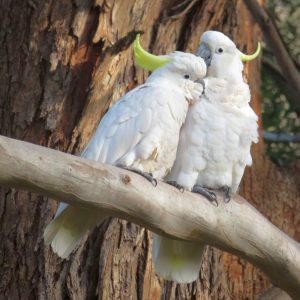 There’s something else I discovered about Dianne – she loves birds! Perhaps those windows in her study, or perhaps it’s the many bush walks that she and Graham have enjoyed, that have encouraged this interest, but Dianne is an avid watcher of birds.

She cites the many avian visitors that they have on their block including sulphur-crested cockatoos, galahs, king parrots, three species of pigeon, two species of corella, Australian magpies, two species of currawongs, butcherbirds, noisy miners and Indian mynas. She is also a member of Birdlife Australia an organisation which studies Australian birdlife and who organise, in October each year, birdwatchers Australia-wide to note down the type and number of birds that they see during one fortnight – Dianne is a keen contributor to their tally.

This interest has led to another; that of photography, and Dianne has now purchased a camera specifically to record her avian visitors and their family travels.

Together Dianne and I wander through their backyard, past Graham’s shed which, she tells me, is full of interesting “things like model aeroplanes“. I’m intrigued by a sleek, bright red 1965 Ford Mustang in the garage and see also that there’s plenty of room in the yard for their three grandchildren to play.

Down the driveway, we visit the compact and well-appointed caravan before I manoeuvre my little car back out of the long driveway.

So now, do I have more of a sense of ‘the Dianne I know less of’? Perhaps, but who can record a life in less than 3000 words? This story is just a taster, but one that I have enjoyed writing.