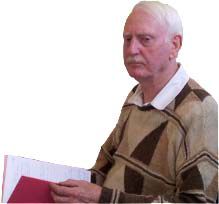 Meet John Stuyfbergen, class leader in Life Writing and our tutor in Introduction to Latin as well.

John, as many U3A-ers have noticed from his accent, was born and educated in the Netherlands. He flunked University, but after a cadetship in journalism, he finished up in West Papua as a journalist, fully supporting the local people’s quest for independence.

Having been kicked out of the country when Indonesia took over, and having declined to become foreign correspondent in Vietnam, John and his wife finished up in Australia. Having obtained a diploma in engineering he worked for many years in Industry in various management functions.

With hindsight he blessed his luck when he lost his job in a company take-over, as this gave him the chance to continue with some unfinished business. As a mature age student he went back to University. He majored in Media Studies and English literature and continued his studies gaining his PhD in English literature. His special research was autobiography and Lacanian psychoanalysis. After a few years of lecturing and tutoring he became deputy director of the Unit of study in autobiography and biography.

Retired now, John enjoys working with U3A immensely. Having published some short stories and having won some awards, he now reckons it is pay-back time. “Being a facilitator for people wanting to write their life story and enjoying writing, is extremely satisfying“, he says. “You keep on meeting new people and make friends. People who aren’t members of the U3A do not know how much they are missing out on with such a great variety of activities on offer.“