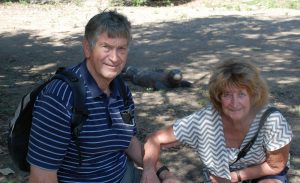 Have a look at Pat Rhys-Jones' article about her 2014 holiday in Timor Leste and West Timor (pdf).

Here is how Pat introduces the article: "In the early to mid 1980s, I worked with a young chap and we became good mates. He was from New Zealand and he told me how his mother was taken to hospital when he was just 10 years old and never came home. Not having been able to say good bye to his mother had a profound effect on him. His father, later, moved him and his brother and sister to Australia. His brother’s name was Gary Cunningham one of the 5 journalists killed at Balibo in East Timor. And so I became interested in the story and have followed TV reports, etc. I wanted to see Balibo and eventually dragged Les to this country."