An interview by Judy Vizzari in July 2017. 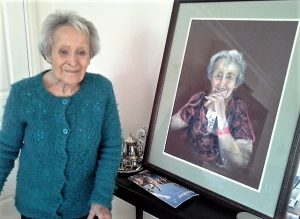 When a stork flew over Melbourne’s inner suburban landscape in 1927, he carried a precious bundle – not just a baby, but a generous mix of sweet spices, chilli pepper and fairy dust. He was delivering Kath Meade to her waiting family in Richmond during one of Australia’s darkest eras – the 1920/30s Depression.

Kath’s wasn’t to be an easy life. Her parents ran a catering service and the whole family was involved in eking out a living during harsh times. The arrival of Kath’s twin sisters during an earthquake in 1932 added to the family’s struggle and, soon after her 14th birthday, she left school to assist her family by embarking on a working career.

Kath’s pathway was circuitous. It commenced at Coles Emporium and led her, by the 1960s, to the exciting world of marketing and Melbourne television.

Kath’s lucky break came when a progressive soap manufacturer, Proctor and Gamble (P&G), sought to introduce their products into Australia for use in new washing machines. An Australian alliance was formed between P&G in England and local manufacturer General Motors Holden (GMH), her then employer.

Marketing was needed to convince Melbourne housewives to adopt new technology and Kath’s skills earned her this responsibility while promoting P&G and GMH products. Such was this diminutive little lady’s drive that she was soon travelling throughout Victoria, utilising her knowledge of catering through her girlhood experiences to demonstrate the charms of ‘new’ equipment.

Kath fulfilled her role so effectively that soon washing machines, stoves and freezers were being installed throughout Victorian cities and towns and Victorian housewives were switching from soaps to detergents.

With the introduction of television in the late ‘50s, Kath also promoted washers, fridges and freezers on screen, appearing in many advertisements and rubbing shoulders with the stars of Melbourne television. These were heady times.

But Kath is multi-faceted. She married and became Kath Keppel, wife and mother. She was then supported in her fascinating journey by her “very patient” husband, Bill and her loving daughter, Lyn. Surprisingly, she also had time to indulge her love of art through the study of china painting in Daylesford.

Kath is now almost 90 years old but, despite her failing eyesight and restricted mobility, she continues to live her life to the full. She is an enthusiastic member of the Thursday afternoon U3A Art Class at Eltham High School and is loved by our group for her keen wit and interest in her fellow artists. Recently she modelled for us during a Figure Sketching session and, although her personality doesn’t allow her keep still for long, she fulfilled this task with style.

Kath is indeed a blend of the sweetest spices, a lady whose achievements have been lighted by colour and energy and now, how appropriate it is for her to continue to broaden her experiences through membership of our exciting U3A community.

Although Kath is currently in hospital, we all look forward to celebrating her 90th birthday with her later this year.