One for the road and on the wagon

There is an old pub in Marble Arch, London, which used to have some gallows adjacent to it. Prisoners were taken to the gallows (after a fair trial of course) to be hanged.

The horse-drawn dray, carting the prisoner, was accompanied by an armed guard, who would stop the dray outside the pub and ask the prisoner if he would like one last drink.

If he said yes, it was referred to as one for the road.

If he declined, that prisoner was on the wagon.

Good story, eh? Now it is the habit of your webmaster (Guy) to, where possible, check the veracity of contributions. So, I checked this one and it has been found wanting! However, it is such a good story that I'm still including it! Here are my sources:

One for the road: origin unclear, but the phrase only dates back to the early 20th Century.

On the wagon: origin relates to people drinking water from water-carts in early 20th Century USA.

In the 1500s, most people did not have pewter plates, but had trenchers, a piece of wood with the middle scooped out like a bowl. Trenchers were often made from stale paysan bread which was so old and hard that they could use them for quite some time. Trenchers were never washed and worms and mould often got into the wood and old bread. After eating off wormy, mouldy trenchers, people would get "trench mouth".

Per Wikipedia, a trencher is indeed a type of plate that was originally made from stale bread. At the end of the meal, the trencher could be eaten with sauce or distributed to servants or given to the poor. Later, they were made of wood or metal. A cheeseboard is the modern equivalent.

Trench mouth, aka acute necrotizing ulcerative gingivitis, is a gum disease. However, the phrase is not related to trenchers. Rather, per Wikipedia, the phrase was first used during World War 1 as many soldiers developed the disease partly because they shared water bottles in the trenches and partly because they didn't have access to dental care.

Bring home the bacon and chew the fat

In the 1500s, sometimes they could obtain pork, which made them feel quite special. When visitors came over, they would hang up their bacon to show off. It was a sign of wealth that a man could bring home the bacon.

They would cut off a little to share with guests and they would all then sit around talking and chew the fat.

Bring home the bacon: the phrase only dates back to the early 20th Century, where most of its initial uses were boxing-related, with 'bacon' probably being slang for 'body'.

Chew the fat is a variant of chew the cud, meaning to chat in an aimless manner, where the metaphor is simply based on the observation that cows masticate their food for a long time.

In the 1500s, bread was divided according to status. Workers got the burnt bottom of the loaf, the family got the middle, and guests got the top, or the upper crust.

In the 1500s, they cooked in the kitchen with a big kettle that always hung over the fire. Every day they lit the fire and added things to the pot. They ate mostly vegetables and did not get much meat. They would eat the stew for dinner, leaving leftovers in the pot to get cold overnight and then start over the next day. Sometimes the stew had food in it that had been there for quite a while, hence the rhyme, "pease porridge hot, pease porridge cold, pease porridge in the pot nine days old".

[Pease porridge, aka pease pudding, is a savoury congealed mixture made with split yellow peas and often cooked with a bacon or ham joint. It is (or, at least, was) a common dish in the North East of England.]

According to the 2004 book entitled Word Myths: Debunking Linguistic Urban Legends by David Wilton, the above story could possibly have some truth: pease porridge was a common dish in the 1500s and it can include leftovers. However, the first recorded use of the rhyme only dates back to the 18th Century.

In the 1500s, lead cups were used to drink ale or whisky. The combination would sometimes knock the imbibers out for a couple of days. Someone walking along the road would take them for dead and prepare them for burial. They were laid out on the kitchen table for a couple of days and the family would gather around, eat and drink and wait and see if they would wake up. Hence the custom of holding a wake.

From the Encyclopedia Britannica: 'there existed the custom of holding a wake over a corpse. The custom of holding a wake, as far as England was concerned, seems to have been older than Christianity and to have been at first essentially Celtic. Doubtless it had a superstitious origin, the fear of evil spirits hurting or even removing the body. The Anglo-Saxons called the custom lich-wake, or like-wake (from Anglo-Saxon lic, a corpse)' 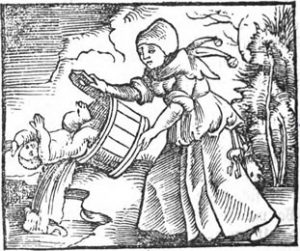 Don't throw the baby out with the bath water!

In the 1500s, baths consisted of a big tub filled with hot water. The man of the house had the privilege of the nice clean water, then all the other sons and men, then the women and finally the children. Last of all the babies. By then the water was so dirty you could actually lose someone in it. Hence the saying, don't throw the baby out with the bath water!

Per The Phrase Finder, the phrase did originate in the 1500s but in Germany rather than in England. It was first used in a satire entitled Narrenbeschwörung in 1512 (where it was accompanied by the image on the right) and only reached the English language in the 19th Century.

The graveyard shift, saved by the bell and dead ringer

In the 1500s in England, people started running out of places to bury people, so they would dig up coffins, take the bones to a bone-house and re-use the grave. When re-opening these coffins, 1 out of 25 coffins were found to have scratch marks on the inside and they realised they had been burying people alive. So they would tie a string on the wrist of the corpse, thread it through the coffin and up through the ground and tie it to a bell. Someone would have to sit out in the graveyard all night ('the graveyard shift') to listen for the bell. Thus someone could be 'saved by the bell' or was considered a 'dead ringer'.

The graveyard shift: the earliest example of the phrase in print is from the late 19th Century, where it referred to the work shift from around midnight to 8am.

Saved by the bell: It is certainly true that some people worries about being buried alive; for example, some of George Washington's last words were "have me decently buried, but do not let my body be put into a vault in less than two days after I am dead". It is also the case that 'safety coffins' have at times been designed and sold (see the diagram). However, there is no evidence that either of these developments were associated with the term saved by the bell. Rather, the expression is boxing slang and was invented in the late 19th Century.

Dead ringer: The phrase means 'an exact duplicate' and is nothing to do with dead people. 'Ringer' means duplicate, and is horse racing slang for a horse which was substituted for another in order to defraud bookies. 'Dead' means exact or precise, as in 'dead centre' or 'dead heat', not 'not alive'. The meaning of both words, plus the phrase itself, were all coined in the USA in the late 19th Century.

In the 1500s, houses had thatched roofs, thick straw piled high, with no wood underneath. It was the only place for animals to get warm, so all the cats and other small animals (mice, bugs) lived in the roof. When it rained it became slippery so sometimes the animals would slip and fall off the roof. Thus the saying, it’s raining cats and dogs.

There was nothing to stop things from falling into the house. This posed a real problem in the bedroom, where bugs and other droppings could mess up your nice clean bed. Hence, a bed with big posts and a sheet hung over the top afforded some protection. That's how canopy beds came into existence.

The floor was dirt. Only the wealthy had something other than dirt. Hence the saying, dirt poor.

The wealthy had slate floors that would get slippery in the winter when wet, so, they spread thresh (straw) on floor to help keep their footing. As the winter wore on, they added more thresh until, when you opened the door, it would all start slipping outside. A piece of wood was placed in the entrance. Hence a threshold.

Raining cats and dogs: per The Phrase Finder, "No one knows the precise source of the 17th century expression 'raining cats and dogs', but we can be sure that it didn't originate because animals fell from the sky." Note that, in the first recorded instance (Richard Brome's The Woman Wears the Breeches in 1653), the reference was to 'polecats' and this only got changed to 'cats' in Jonathan Swift's A Complete Collection of Polite and Ingenious Conversation in 1738. As discussed in the 2004 book entitled Word Myths: Debunking Linguistic Urban Legends by David Wilton, one can envisage mice, bugs and other small animals living in the thatch of roofs. And maybe such animals would attract cats. But it is much more difficult to imagine dogs living up there. Furthermore, per The Phrase Finder, "for dogs to have slipped off when it rained they would have needed to be sitting on the outside of the thatch – hardly the place an animal would head for as shelter in bad weather."

Canopy beds: per Wikipedia, canopy beds were used in the 16th Century (and earlier) in Europe but they were used by rich people and rich people typically did not need to worry about things falling through the roof. Rather, the canopies were to afford the rich people both some warmth (castles are draughty places) and some privacy (from their servants who slept on the floor nearby). In passing, note that a canopy bed has many parts, including: bed frame, bedposts, bed rails, canopy, casters, centre supports, crown, finials, footboard, foot, head, headboard, platform, risers, side rails and schrooms.

Dirt poor: per Merriam–Webster, the term was first used in 1937.

Threshold: per Merriam–Webster, the word dates back to Alfred the Great (9th Century), with its origin not known.