An interview by Debra Forbes in January 2019.

In August 2020, Bill wrote his own life story for this website. 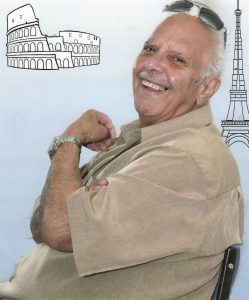 I'm sitting in the Italian class on a Friday evening waiting to see Bill. We have history, I have studied in his classes, we have worked and laughed together on projects in support of U3A, and we have shared time on the U3A committee.

Bill’s contribution to U3A has been long, tireless and – possibly more importantly – of enormous value to our U3A community. He sings, many times impromptu; he dances; and he gives of himself, his time and his love. But I get ahead of myself. Let's get to know Bill Naim the person before he came to us at U3A.

Guillaume Naim (Bill) was born in Alexandria, Egypt, his father an Egyptian and his mother half Italian, half Maltese. Unfortunately, his father died in a tragic accident not long after Bill was born so his mother was left to raise him and his sister Lilliana by herself. Bill was sent to a French boarding school at around five years of age, whilst Lilliana was sent to an Italian boarding school. As a result of these connections and entwinings, Bill became proficient in Arabic, French and Italian, with a smattering of Maltese. Thereafter, family meetings were peppered with all these languages to exercise the tongue and mind.

Throughout this time, Egypt was in something of a state of turmoil with Nasser becoming the president of Egypt after overthrowing the monarchy. Tensions were rising with western powers as Nasser nationalised the Suez Canal. As a result, Nasser's power increased, and the United Arab Republic was formed. Nasser then announced that all Europeans living in Egypt should leave! Whilst Bill may have been able to stay as an Egyptian-born citizen, his mother could not. His mother had the view that it would help if went to Melbourne Australia and joined his uncles already living here. So, after 3 years of English instruction, and matriculating in English as well, he and his mother set sail for Australia in 1962.

Once in Australia, Bill found the first year difficult, particularly socially, but the second year he found his wings and blossomed in the Australian climate. He met Gay in 1964, married in 1966 and has now been married for 52 years. Two life sentences for some, but not for Bill and Gay who to this day still demonstrate their love for each other daily. They have raised five children and settled into our community. Bill worked, mostly at Qantas, as a Duty Manager until his retirement. They currently have seven grandchildren, five of whom reside in Perth and two in Melbourne.

Retirement has seen Gay and Bill doing many cruises around the world, catching up on all those experiences which needed to wait while bringing up their children.

A strong passion of Bill's is singing, operatic singing. When at the French boarding school, the nuns at St Vincent de Paul introduced Bill to the church and school choir which began his love affair with music and singing. Later this talent would be recognised when entering a singing competition on the P&O liner 'Oriana', the manager of which recommended Bill to Channel 9 for further development. Whilst he could not take up that opportunity, his love of singing continues strongly today. Many of us have experienced Bill's spontaneous bursting forth with his beautiful baritone voice at some rather unexpected times. "Bill's here" you sometimes hear as people turn to listen to him.

After his retirement, as with many of us, his interest was sparked when Mal Harrop advertised in the local paper for a meeting of interested people to start a U3A in the Eltham area. Bill was already teaching French at the U3A in Hurstbridge, so it was an easy transition to Eltham.

Bill started the French classes which became so popular that he had to 'employ' more tutors. This brought us tutors of the calibre of Lucille Sadler, Roger Barnard and Steve Gilbert. Bill started an Italian class which continues to this day.

The activities did not stop at the language classes. Bill’s love is getting people together. Whether that is on a bus trip, or a choir presentation, or a dinner dance, does not matter. It is the bringing together of the community, for their enjoyment, which is important to Bill.

Bill was on the Nillumbik U3A Committee for two years, has represented the U3A with Council on several sub-committees, and has worked to arrange events for Seniors’ Festival each year. I like to remember the Seniors’ Week 2016 where Bill, along with Mal Harrop, arranged for seven events over seven nights. I said I’d help, and he made sure I did! The effort to produce these events was mammoth, too much really for so few to organise. Consequently, the following year's Seniors’ Week 2017 comprised only two events, the Shaun Islip Diamond Valley Choir, then the Jazz Night and Dinner Dance. This was again Bill’s work. This year, 2018, Bill has been instrumental in providing advice for 2018 Seniors Festival events, as he slowly takes a back seat with his work with U3A.

In writing this, I have tried to uncover some little delights from Bill directly, I offered him what I believed was one of his favourite tipples to help loosen the tongue, but he declined. I tried cajoling, but he batted my efforts aside. I thought – time to go undercover. So, I interviewed some of his students to find some 'dirt'. This is what I got.

A phone interview with Peter Schieron a former class member of both Italian and French. “Bill is the opposite to boring, the classes are fun and time just flies by. It is an ‘extreme entertainment’ being in his class. Bill uses a student’s particular talent to emphasise teaching, for instance for grammar he would refer to Damian who takes great pride in the correct use of grammar, for food Bill would refer to me as cooking is my passion. He doesn’t make you feel silly if you don’t know an answer to a question but, if you do know it, there are terrific accolades for you."

I visited the current Italian class and interviewed Gil Wings and Isabella Russo. “Oh, we just love Bill. He demands of us a huge level of involvement and we cannot wait to give it to him. One of his favourite phrases is ‘You must masticate your words, masticate, masticate’. So, we masticate. He loves to sing, anywhere anytime and we just let him, he has a beautiful voice. His passion is all encompassing – we just love it, it is huge. But boy, does he struggle with technology, technology and Bill don’t go together and then he gets stressed, but really, Bill runs a very enjoyable class.”