An interview by Judy Vizzari in April 2018.

"A combination of history, coincidence and politics coming together." 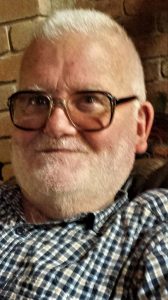 Brian McLean’s Scottish and Irish ancestry is reflected in his stout build, ruddy round face, shock of white hair and bristling beard, and there’s a hint of them in his cheeky eyes. Perhaps, even now, they add colour to his thoughts and words – Brian exudes enthusiasm and appears to have ‘a touch of the Celt’ about him – he’s a man who seems to love life and who loves to talk. At least, this is what I’m thinking as I sink down into an enormous club chair in his 1980s style ‘sunken’ lounge-room.

It’s a Friday afternoon in heavily-wooded Eltham quite close to the Diamond Creek and outside all is quiet. I’m visiting to get to know Brian before writing an article for the Nillumbik monthly bulletin and it looks like the interview will be fun.

So where do we start? At the beginning, but the beginning of what? NillumbikU3A perhaps, as he was a founding member of this organisation, or should we go back further into his formative years, his career and his interests?

His story flows and there’s no need for pondering, we’ll start at the very beginning.

Brian, the second of three boys, was born in Melbourne in the early 1940s. His mother, Iris, was a work-at-home dressmaker and a nominal Anglican, while his father, Jack, was a plasterer ‘tradie’, a lapsed Catholic and an avid unionist who “wouldn’t have a bar of the DLP”. The family lived in Thornbury.

Brian was educated in the state system – primary school, then Northcote High and finally University High (where he matriculated in 1959). Concurrently, he obtained a quite different education working with his father between studies and he clearly remembers sitting with the plasterers during breaks and listening to their often political discussions.

So where did this lead?

To teaching – Brian’s love of sport led him to the Diploma of Physical Education course at Melbourne University and then to Secondary Teachers College from 1960 to 1962. His first teaching post was at Moreland High. Four years later, he accepted a post as Sportsmaster at Trinity Grammar School and it was there that he discovered an interest in history and politics. Keen to learn more, he returned to part-time study and completed an Arts Degree.

By 1981, he had taken up a post as Sportsmaster at Eltham College, where he also taught History and Politics. During his 16 years there, he was promoted to the responsibility of Head of Senior School. He eventually retired in 1997.

“I can remember as a kid going down to my grandparents’ place in Collingwood and over the fireplace there was a huge photo of my grandfather in his AIF uniform. I knew that he had died in France in 1917 but I never knew his story. That led me into genealogy.”

In the first five years of his retirement, Brian explored his grandfather’s story and found records of his sad and premature death in France during the First World War. The investigation provided an important link for him and his family with his past and was a building block in his thirst for on-going learning.

By the late 1990s, he was ready to share his training and knowledge of 20th Century events and it happened that an opportunity arose quite unexpectedly.

The Birth of Nillumbik U3A

In 2008, Wilma, Brian’s wife, saw a notice in the local paper advertising the birth of Nillumbik U3A in Hurstbridge as a member branch of the worldwide U3A movement. A small but enthusiastic group led by Sabi Bueller were behind the initiative and they were canvassing for members. Both Brian and Wilma enrolled.

“Sabi was the passion, what she went through to start that place (Nillumbik U3A) was incredible. (She) was the inspiration and Laraine Hussey, who still works in the U3A office today, was the organiser.”

But the beginning coincided with Black Saturday and the horrendous bushfires that ravaged the outskirts of Melbourne’s north-east, destroying land and properties and reaping carnage and death in the hills behind Hurstbridge. Many of the organisers and enrolled students in Nillumbik U3A’s first classes were affected and it was only through comradeship and determination that classes commenced and the organisation survived and grew.

Brian speaks with emotion of that time.

Brian remembers the consternation in the existing Nillumbik U3A when it was announced in the local press that a meeting was being held to start a U3A in Eltham. The existing members were initially dismayed and it took a lot of discussion and goodwill between the leadership of both groups, plus guidance from the central U3A organisation, to bring about the consolidated Nillumbik U3A as we know it today.

In the ensuing years Doug Rutherford, Stuart Winstanley, Lyn Hatherly, Gillian Essex and Karen Coulsen have all led our growing organisation and now, Guy Palmer, current President, has taken on the responsibility of leading its ever evolving membership.

Since the early days of Nillumbik U3A, Brian has been a class member, Tutor, Committee Member and, for a period, Vice President.

From student to tutor

“… any hope of understanding what is going on only comes from seeking information from outside your comfortable echo chamber.”

After being a student in Sabi’s ‘Soap Box’ discussion group and a course in Understanding Economics, Brian made the transition to tutor when Sabi retired. He decided to “give it a go … for one term“. He is “still developing curricula four years later“.

A group which “looks at a difficult issue and tries to develop an understanding of it“.

Brian tells me that this course caters for a range of students, from those with an avid interest in politics and recent history to those who take a general interest in current affairs and “want to know more“. He says that he has students who have remained in the group from its beginnings and, judging by his insightful comments, I can see why.

About the same time, Brian introduced a course on the History of Protest Music – “a course developed to place the musical lyrics in the historical context of the times“.

Protest Music examines the lyrics and style of wide ranging music from differing cultural backgrounds and eras, e.g. Apartheid in South Africa, the Troubles in Ireland, and Civil Rights in America. It focusses on the music which records events and attitudes and has swayed opinions during the turbulent 20th Century. Unfortunately, the course is not on offer at the moment, although Brian is considering another season.

Brian remembers the special magic that he and his students shared when, in earlier days, his Discussion Group met in the morning at the Hurstbridge Hub, enjoyed lunch together in the café there, and then continued on to the Protest Music session in the afternoon – they were fun and fruitful times.

So what’s in it for Brian?

I ask him what he gets out of his teaching and he muses a while. He then tells me that ‘selfishly’ it keeps him informed and up-to-date, forces him to read and to keep his brain going, and keeps him in contact with interesting people.

Time for other interests

Brian is a family man. He and Wilma, a Preston girl who he met when she was aged 15 and he was 16, married in 1964 and soon swelled their numbers with three children. Their family now includes five grand-children.

It’s easy to think that whatever spare time he has would be greedily absorbed by family matters and, yes, his family is important to him – he beams with pride when he speaks of them and I can see by the family photo he shows me that they’re a handsome crew – but he and Wilma also enjoy travelling and that, he says, has been a major interest for both of them. Their visits include China, Russia, the United Kingdom, Alaska and America. France was a special destination, too, as it enabled him to locate and visit his grandfather’s war grave and create a valuable link with his family’s history. Another trip he and Wilma undertook was the Grey Nomad Round-Australia-in-a-Van trip and they would like to see more of Australia. Like so many of today’s retirees, they are enchanted with their travels and, given the right time, plan to travel again.

He made another road trip, too, a cycling trip in Vietnam: Brian and three friends from Banyule BUG cycled the Ho Chi Minh trail from Hanoi to Ho Chi Minh city for three weeks in 2010. It was a backroads adventure, eating and sleeping with the locals – a physically demanding ride but a memorable cultural experience.

I’ve been here for two hours and gathered a wealth of information, listened to some clips of great music, heard a fascinating story and learnt more about Nillumbik U3A’s origins than I’d expected. For me, the time has flown.

Now, Wilma has returned home and I leave, eager to relax at home with some good protest music – Bob Dylan maybe – and a glass of wine while I think back over our talk.