An interview by Judy Vizzari in May 2019. 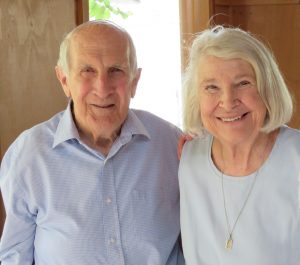 Today I'm at Green Place in 'Dulaiwurrong Village' in Eltham. I’ve been here before and am pleased to have a reason to return as it's an idyllic spot just walking distance from central Eltham. This eco-village, which includes 26 residences, is built around a circular road bounded on one side by the Diamond Creek and on the other by Railway Parade and the parallel Hurstbridge Railway Line. I've read that those who live here commit to three themes – respectfulness, sustainability and community – and aim to "create a framework of community and the foundational processes through which people connections can be cultivated" (see Global Ecovillage Network). I hope to hear more and, as I'm visiting Serena and Graeme Sweeney, two Nillumbik U3A 'originals' who are village residents, I’m looking forward to their stories.

I meet them on the circular road outside their house – as the first residents in Dulaiwurrong Village, they had first choice of the land and their pick has served them well. It's a site close to the creek, one which affords them an enchanting view of the bushland on either side of it. They tell me that each moment of the day passes with the songs of native birds and the spectacle of air and light playing through spotted trunks and eucalypt foliage. I can see why they love this place.

Inside their two storey Hebel brick home, Serena makes tea while Graeme and I settle at a brocade covered oval table in the long, open-plan ground-floor room. It's warm and sun filled and, from the moment we entered, I’m struck by the walls which are lined with books – many shelves, floor to ceiling, double-stacked with hundreds of bound editions, some recent, many aged, all fascinating. I’m reminded of the library room in Read House 1 at Heide Park in Bulleen. Amongst the titles I glimpse are biographical, mythical, culinary and historical themes and I'm sure that many novels plus gardening, farming and social information are also there – it’s a stunning collection.

Graeme points out to me several perspex-protected shelves of aged editions which have been passed on to them for safekeeping by their son, David, who in turn was bequeathed them by a friend. They are treasured and could well be treasures.

My gaze extends to the rest of the collection and I see fiction and non-fiction, hard covered and paperback books, journals and magazines. I wonder how many of them have been read and whether Serena and Graeme can find the volumes they need at will. Graeme tells me that Serena can, and she agrees that she can put her hand on "most" of them when needed. I’m impressed.

Graeme introduces me to a fluffy black cat, Figaro … but he’s singularly unimpressed by my presence and chooses to continue to nap on a generous, rug covered couch in what appears to be a reading nook.

It occurs to me that this warm and inviting house seems to reflect its hosts' youthfulness of spirit and their depth of knowledge. Although octogenarians, they're a lively couple.

About Serena and Graeme

So how do I see Serena and Graeme? Not tall or loud, but friendly and quietly confident and comfortable in their surroundings; at ease with themselves and with me. I'm aware of their smiles, which are warm and frequent, and a particular sharpness of gaze which tells me that I'm also being gauged while I learn about them – I've already learnt about their tertiary education and feel bound to tell them I can’t match their educational levels!

Serena trained in Sydney as a pharmacist and, as a young woman, travelled and worked abroad while Graeme worked as a senior administrator of university student bodies firstly at Melbourne University and later at Monash. Two people from different states, working in different worlds, I wonder how they met.

Graeme fills in a little of their background – before he met Serena in mid 1970s, he had a small acreage just east of Melbourne. He fixed on the notion of purpose and considered the influences of community and sustainable living in utilising his property. He developed an idea – to build a society where each member contributed to the welfare of the whole (sounds familiar?). To test his theory, he researched societies built on similar ideas and eventually travelled to an eco-village near Moray in northern Scotland to experience first-hand the Findhorn Project. His ideas set him on a path to explore many philosophies and religious themes.

Graeme never created his own village back in Australia, but I sense that this episode in his life has had long lasting value for him – not least that during this journey he met Serena.

Picture a room somewhere in South Yarra crowded with New Age enthusiasts intent on uniting their minds with their bodies and spirits. Seated around the walls are those who are unable, for one reason or another, to sit on the floor. Imagine Serena amongst the seated. Enter (late) a man coming to join the group – he notices a striking woman and she him. Sounds like a romantic movie theme? In fact it was the beginning of a lasting relationship.

Timelessness is a valuable asset. How do we retain the energy and curiosity of youth when our bodies describe the passage of time? Serena and Graeme seem to have a few answers and, amongst them, I suspect curiosity, passion and a thirst for learning are uppermost. It seems to me that they have never tired of discovering their world and promoting, reverently I suspect, the causes that they support. For example, they were amongst the protesters who last year participated in Melbourne’s march during the world-wide Climate Change protest.

They have been members of Nillumbik U3A for eight years and are keen students, particularly in Brian Ellis’s classrooms, where discussions are lively and opinions aired with respectful enthusiasm.

They are also members of a local writing group (not U3A provided) which was initiated by Lyn Hatherley, former Nillumbik U3A President, 16 years ago. They support the group by offering their home as a venue for meetings and value this opportunity to hone their writing skills and record their experiences. Serena also knits (hence the rugs) and she enjoys gardening, while Graeme is a keen member of Eltham’s Men’s Shed, which is within walking distance of their home. They are active contributors to our community.

Step into the garden

It’s almost time for me to go but, before leaving, I ask whether we might visit the garden that I have glimpsed through a large picture window in the reading nook. We wander out to a narrow walkway between house and fence. This is a small backyard but it’s obviously well thought out and planted with a cottage blend of flowering plants, vegetables and beautiful climbing roses still in bloom. These flowers are Serena’s delight and, as I watch her describe the three delicate rose varieties, I feel I’m watching yet another scene from that romantic movie.

Back inside, past sleepy Figaro, who is still sprawled across the mulberry hand knitted rug on 'his' couch (why move?), then out through the front door and its neighbouring residents (some blue-tongued lizards who remained hidden in their lair). Together we walk back to the village entrance where my car is parked and I thank them for their hospitality and our very pleasant morning together.

I bid them farewell and, at Graeme’s request, interrupt the quiet by revving my little red Mazda MX5 as I leave.