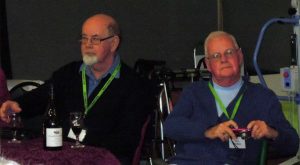 There are a few aspects of our ABC of Jazz course which are predictable to the point of almost becoming traditional.

John Crichton’s phone generally rings at about 10 a.m. each Monday morning as he is walking to Montmorency for morning coffee. “Hullo Doctor“, he invariably replies because it will almost inevitably be his co-presenter Mal Harrop. They are currently back to working through the ‘Bs’ in the alphabetical framework which keeps them loosely on track and during about a half hour phone call, they confirm what music they will play between 4 and 5 p.m and select a DVD for Happy Half Hour. Sounds simple but the duo will have books, background and anecdotes prepared for the B of the moment whether it be Bix, Bell, Barnard, Bechet, Burrows, the Blues or the Best of British using their own extensive resources backed by the Australian Jazz Museum.’

Among many highlights of John’s jazz ‘career’, are a long relationship with the Victorian Jazz Club of which he was for a number of years program coordinator and President. He has also presented jazz on a Wednesday evening at Radio 3 INR FM for the past 26 years and continues to do so. He more than earns the “D.J” title.

Almost as predictable as the phone call on Monday morning is the opening of each session with the D.J. calling order by playing one of the many versions of ‘Dr.Jazz’ to introduce his partner. While admitting that a history PH.D helps with research, Mal simply believes that he has been unbelievably lucky to live in Melbourne during some golden years for jazz. “Virtually every style of jazz from ‘mouldy figs’ traditional to ultra-modern was being played and played well”, he recalls. His luck extended to being one of the founders of the Montsalvat Jazz Festival and coordinating a range of jazz events including the inaugural Melbourne International Jazz Festival.

As a team John and Mal embrace and enthuse about the whole jazz spectrum. As with jazz some things about the course including outings and guest speakers are unpredictable but the co-presenters promise more surprises to come. This is as much a club as a course, open to all U3A members as space permits with visitors welcome to ‘try it and see’.