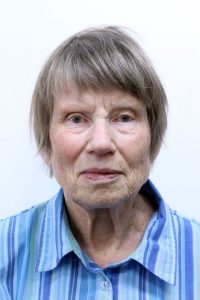 Membership of Nillumbik U3A: this is my second year.
Membership of other U3As: Yarra Valley (Heidelberg) U3A (1st decade this century).
Reason for joining our U3A: to keep mentally active and to make a contribution to the community.
Is this the first U3A class you’ve tutored: it is my first class for Nillumbik U3A. At Yarra Valley, I convened an Eltham outpost class for Current Affairs in 2005/2006.
Other U3A classes attended: Current Affairs this year and Alan Cuthbertson’s presentation.
Nillumbik resident?: my husband and I were looking for a place to build our home in the late ‘60s. We purchased a block in 1970 and moved into our house in April 1973.

My qualifications and background encompass a broad area in the commercial arena. I have led discussions groups, countless meetings and conferences, tutored German and was, for decades, involved in a public speaking group.

Environmentally, life on this planet is in crisis and this has increased my longstanding interest in environmental issues. I am a member of several environmental groups and a supporter of many more, plus animal welfare groups. The climate emergency has finally made a breakthrough within the media, in business and even with some politicians; it’s now a ‘buzz word’ but there is much more to this crisis than just the climate itself.

In this discussion group, I want to explore all issues that need to be considered to steer life onto a proper course to ensure ours is a ‘liveable planet’ with a long-term future.

I hope to engender a growing awareness amongst course participants of the environmental issues facing us this century and hope that they will share this awareness within their communities.

There is no ongoing environmental discussion group in Nillumbik outside the first term climate change course.