An interview by Judy Vizzari in December 2019. 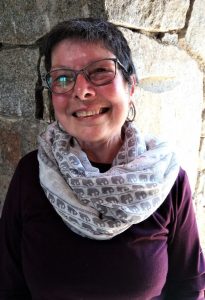 What do you do when your outrageously popular U3A course overflows with applications from would-be students? Can you let go of the bonds that you’ve cemented with your former participants? These questions have been asked a lot recently and generated much discussion. This week, when I visited seasoned tutor and former Nillumbik U3A president, Karen Coulston, I learned of her solutions and also learned that she is a lady with a story to tell.

Karen is petite but, when she greets me at the front of her bushland home just off the Yarrambat/South Morang Roads, what most impresses me are her bright eyes and direct approach. She appears as an accomplished and strongly independent person.

We stand on the flat part of a hill atop her six acre property. The land is high and all around are views of distant ranges and thick canopies. To the west is an area which was once a small vineyard but is now re-planted with indigenous trees and shrubs. Eastward there’s a collection of ornamental and fruiting trees fronting a drop down into a gully of thick gum-green bushland with distant mauve blue hills hedging the far horizon.

Before entering Karen’s house, we wander over to a tiny, century old rammed earth miner’s cottage (there’s a gold mine under the ridge) which stands within clear view of the home. It’s a two-roomer with a double chimney which once housed two wood fired ovens, one inside backing onto another, outside. The cottage comprises a living/sleeping space and a rustic bathroom. It contains sparse vintage furnishings and echoes early Australian existence.

Karen was for many years a professional winemaker and, she says, during that time, her cottage was used as a cellar door for tasting days. Now it’s unused but its exterior has just been rejuvenated with a light coloured mud and lime rendering. Karen has plans for the interior too: to return it to its former self. I’m intrigued by the renovation and ask about the cottage’s future use – it will apparently be a place for respite and, occasionally, for guests.

We move on to the main house which was built by its former owners before Karen and her husband, Laurie, purchased it 35 years ago. It is a distinctive blend of bluestone, granite, limestone, timber and glass.

Its unusual floor plan includes an original circular, two storey tower topped by a dome and supported by eight enormous, hand-crafted granite ribs. I’m lucky to be taken on a guided tour – the bottom level contains a cellar which is partially dug into the sloping hill and the temperature drops as we descend a flight of steep stairs – it’s lovely and cool down here. This is a working cellar, which has plenty of wine – some bottles are recent while others belie their age with thick coatings of dust. Karen remarks that not all her collection is still drinkable (though some is very drinkable), but her own series of Hills of Plenty wine is stored in one section as a valuable record of her winemaking history.

Above the cellar is a stunning segmented office space with nooks between the granite columns. It’s made even more amazing by regularly spaced windows affording treetop views.

The tower connects via an enclosed bridge to the rest of the house which was built over the ensuing years and reflects the ‘Eltham’ style of 20th Century architecture, when Alistair Knox was designing solid, open plan light-filled homes using locally sourced materials and Neil Douglas and Glenn Ford were popularising our bushland in garden design. I’m especially impressed by a full wall lined with books, leadlight and coloured glass windows and displayed art, as well as Karen’s own silk and wool fabric prints.

She says that she and Laurie “thought it was romantic to buy a house with a little vineyard …, (but they had) rose tinted glasses” she laughs, “we soon found out otherwise!” There’s a lot of maintenance involved in this property, but I suspect that the benefits have always outweighed its upkeep.

Now we’re sitting in Karen’s family room, sipping the rose-coloured blended wine that was produced by her 2018 U3A group. It’s time to talk about her background.

She was a Blackburn South girl who, in the 1960s, attended local state schools. She was a bright student who eventually received a scholarship to attend Monash University.

“I had a love of pure chemistry“

Karen chose to study science and undertook a degree in Synthetic Organic Chemistry. It seems that it was a good choice as, she says, she loved scientific research and continued to work as a chemist in that field after graduating.

As many young people of that era did, Karen decided to travel. By her 25th birthday she had based herself in London, where she easily found work and from where she was able to explore the nearby continent.

But her adventure was interrupted by the arrival of a friend, a biochemist from Melbourne whose visit prompted life changing decisions – her story is a long and romantic one, one which includes family opposition and acceptance, changes of direction, an embrace of learning and a love of life – Karen and Laurie’s lives seem to have been marked by fearless choices. In 1981, they returned to Melbourne as a married couple and bought a modest house in Box Hill North.

It seems that the vineyard on their newly purchased property had run the former owners ragged – the vines were poor producers.

It was only when Karen and Laurie took over that work was invested in examining growing conditions and formulating a plan to improve quality and production. Karen, who undertook a degree in Wine Science (with exemptions in studies due to her training in chemistry), directed the work. She says, “Laurie was the worker, I made the decisions.”

She continued her ‘day job’ as a chemist but, at the same time, built up the Hills of Plenty label (designed in feminist purple, green and yellow) and she soon started to assist other small winemakers with their processes by sharing her wine press, which had been bought locally but imported from Italy. Such was her knowledge and skill that she built up a healthy clientele as both a vintner and as a consultant to winemakers.

It was also during that time that she was invited to run a short course in winemaking at NMIT, work which she enjoyed and which perhaps provided a basis for her future classes at U3A. “That was“, she says, “the time when my chemistry and winemaking came into full force“.

It was in 2009 that Karen came upon a Nillumbik U3A information booth and, she says, she was impressed … enough to join.

But what to learn? She started with bridge and the walking group then tried courses in history, science and art. With teaching experience and a wealth of knowledge, her obvious contribution was to volunteer to run a course, but what kind of course? That was easy, to teach students of varying knowledge “about winemaking … but it’s more about wine appreciation“.

She designed a course to take a group of up to 12 members along a pathway to the appreciation of wine types and qualities and the importance of good winemaking, traditional or innovative. The first courses evolved through wine and food matching to some winemaking as backyard grapes were offered to produce and bottle a wine (affectionately called the Pink Bastard, named for the source and variety of the grapes that they used). It was a glass of the second vintage produced that we were enjoying as we talked.

It’s here that I return to the popularity predicament – what do you do when your course is ‘too’ popular?

So well did the students bond and so much did they learn that, at the end of their first year, they wanted to continue – they were keen to extend their knowledge and to further cement their friendship. So a second class began and the outcome was the same – Karen’s students couldn’t ‘let go’, neither should they ‘start again’.

So they found a solution – Karen’s two ‘advanced’ classes now meet monthly to further their knowledge through winery visits – for one group to locations as far off as Tasmania in 2018 and for the other, lunch, wine and food pairing at participants’ homes. Earlier, as we walked through Karen’s house, we’d passed a dining room table complete with cloth and set for ten places, each with four glasses. The area was flanked by the ever present windows and outward views. It was easy to imagine the newest group intent on discussing their wine in this pleasant corner.

So perhaps that’s a solution – allow a fresh intake to classes at each enrolment period, but enable ongoing participation for existing students at places/times of their own choosing. This might not suit all courses but it does seem to work well for the Wine Appreciation group.

At the AGM in Term 1, 2016, Karen was elected to the role of Nillumbik U3A President. Soon after, in the Term 2 newsletter she wrote: “Many of you know me as the wine woman with the interesting hair. The hairstyle is the only fashionable aspect of your new president; apart from that she is all practicality (enlivened by colour and texture), down to earth with a love of efficiency, sustainability, a hatred of waste but frivolous in art, travel, food and wine. Science meets art in my winemaking background.”

And that sums it up nicely.

Karen served as president for eighteen months but health issues slowed her down (but only a little). She resigned as president but continued as a tutor and still has dedicated groups of friends and students who value her teachings, her warmth and her knowledge.