An interview by Judy Vizzari in July 2019. 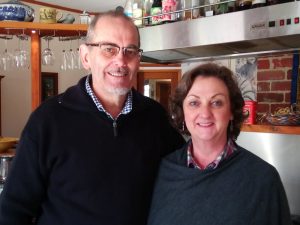 I first met Deb and Peter Thomson at Karen Coulson's Wine Appreciation Group's bottling session in August last year. During the 2018 wine-making season, the group had produced a dry red wine called the pink bastard, a reference, I think, to the local galahs (certainly not the wine-makers) and that day in August had been set aside to complete their experience. Whilst some of the group were busy sterilising bottles, siphoning the liquor and corking, labelling and boxing their bounty … and perhaps a little tasting too … others cheerfully volunteered to do some heavy grounds maintenance – a fair trade for Karen's contribution as tutor of the group. There, in chilly wind and rain, I met Deb fulfilling her duty as 'Head Chef' for the day by preparing what looked and smelled like a delicious meal – paella cooked in the authentic Spanish style (outdoors, in a huge paella dish). Despite the adverse conditions, the group planned to drink and eat well that day.

Now, almost a year later, I'm visiting Deb and Peter at their home in rural Research. Perhaps you know them? Deb, though of small stature, is a vivacious bundle of energy while tall Peter is of a gentler nature – they complement each other well and exude warmth and hospitality.

I'm visiting to learn about their one acre property in Research for an article for the Local Food Connect website. It's an amazing, productive garden and, in fact, much more than 'just a garden'.

But Deb and Peter's interests extend well beyond their home and garden.

First, they are a family of travellers. Peter is an engineer whose work has led him to far and fascinating destinations. The family commenced its journey in 1995-96 in Beijing, China, then 2008-10 Peter worked in Donetsk in the Ukraine, whilst Deb and their youngest, Huon, moved to Vienna in Austria. This was followed by St Petersburg in Russia (2010-12) and then on to Toronto, Canada in early 2012. A work crisis prematurely dragged them away from their Canadian adventure, this time back closer to home, in Brisbane, until 2014. They then spent a short period in India. Peter considered working there for longer but, to Deb's relief, finally acknowledged that it was time to settle back in Australia. They finally returned home to Research in 2014, at which time Peter retired.

Of this itinerant life, the couple say there were many benefits: they have discovered new and fascinating places, met many people and made many friends. Learning languages has been a bonus – Deb has added German and Mandarin to her native English and, for Peter, Mandarin and Russian were necessary additions. Another byproduct of their trips is their varied recipe collection (obviously including Spanish paella). Furthermore, the world has been their four children's classroom and, through their travels, they have absorbed unique knowledge and understanding, much more than they could have in classrooms back home.

From Bentleigh to Woomera in the 1960s

Deb was well primed for globe-trotting during her youth – from suburban Melbourne, her father's work took the family to Woomera in the 1960s. That was the time of military and scientific testing and, sadly, many, including members of Deb's family, have suffered from the physical effects of radiation exposure resulting from those tests.

It was in Woomera that Deb started her acting career – as a child in the cast of Wind in the Willows. She continued performing throughout her youth and, in her late teens, obtained a scholarship to study acting at The Independent Theatre School. Life takes many twists and her acting career was curtailed when she followed her heart, and Peter, to Sydney. Then, her mother's earlier sensible advice to back up her acting with another skill stimulated her to qualify as a stenographer.

Their involvement in Nillumbik U3A

I ask about their involvement in Nillumbik U3A, about the courses they've enjoyed … their list is quite long. Deb and Peter have been members of the Cryptic Crossword, Mah-jong, European History, Jazz Appreciation and Dining Out groups, as well as some of Jane Davies' history classes – Researching Family History and ‘The Russians are Revolting'. Deb has also been an active member of Armchair Theatre and Lawn Bowls whilst Peter has participated in Digital Photo Restoration. They've both very much enjoyed the Wine Appreciation course. Keen learners!

Deb is President of the Eltham Rural Group, an organisation established by a lively set of women nearly 60 years ago. The group, which was awarded Community Group of the Year in 2015, raises funds through various initiatives including dinners, public speaker events, golfing days and markets – their annual Paddy's Market is a very popular local event.

Deb says that they have raised around $30,000 in the past year and that this money has benefitted various local organisations and community services including Riding for the Disabled, Special Schools, Senior Citizens and local fire fighter services. The group offers its members lively social contact and an opportunity for its members to work cooperatively for the benefit of others. 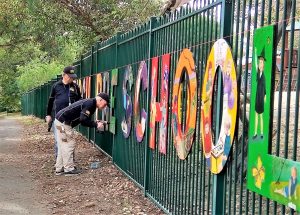 Peter is a member of the Eltham Men's Shed. The men meet regularly in what used to be the North Eltham Kindergarten in Wattletree Road but part of which has now been converted into a temporary workshop equipped with a range of woodworking equipment. Within the Men's Shed, Peter is using his background experience in engineering and project management by leading the development of new workshops due to start construction in the near future. The Men's Shed participate in a variety of community projects and you may have heard of their useful work with various local pre-, primary and high schools. Recently the U3A Painting & Drawing group appreciated the men's services when they erected a Research Pre-School sign painted by the group's artists.

I wondered whether Deb and Peter find living in Research satisfies their lust for adventure – their answer … "no, it's just different". I'm struck once again by the endeavour and enthusiasm with which so many members of our local community so actively live their lives.