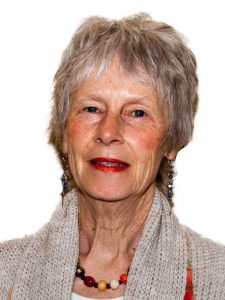 April Edwards joined Nillumbik U3A when the Eltham Campus was formed in 2012 and became a tutor for Tai Chi for the next five terms. She joined the Creative Writing group then and, in 2019, co-tutored The Collaborative Writers’ Group. She also started the Last Tuesday Book Club in 2013/

April’s childhood was spent on a dairy farm in the Western District where she attended the local rural school and later bussed to Terang High School. She completed teacher training at Geelong Teacher’s College before a first posting at Mepunga East rural school. This was followed by a position at Lake Bolac Primary School after her marriage to Geoff. She still has ‘fond’ memories of bitterly cold winter winds and scorching summer winds.

In 1972, the family moved to Melbourne and bought land in Eltham North attracted to the treed landscape and the flora and fauna. Here they built their first home, a Knox ‘muddie’ and, after 18 years, moved to another Knox home in Eltham South. Between 2007 and 2009, life in Prahran was experienced but the bush setting of Eltham lured them back.

April returned to teaching in 1976 and taught for nearly thirty years at Yarrambat, Yallambie, Eltham East, Montmorency South and Ivanhoe East primary schools. She has taught from Prep to Grade 6 including being a librarian introducing books to children. At Eltham East, she set up and registered a native plant sanctuary in the school grounds.

While raising two young children, April went to Yoga but later discovered Tai Chi and practised that discipline for many years including attending workshops in Sydney, with Dr Paul Lam, and in Melbourne, with Grandmaster Chen. Nowadays, she prefers Pilates and attends twice a week to keep the body supple and the joints working, as well as walking their her schnauzer twice a day.

April and husband Geoff have travelled extensively in Australia with the family and spent many lovely evenings around a campfire eating freshly baked damper, before retiring to tents. One of the delights is being woken in the morning to the sound of the birds, much as is experienced in Eltham each morning. April has been a vegetarian for 50 years and was recently surprised, while on a trip to the Wimmera/Mallee silos, that it’s still not widely catered for in some country areas.

Travel overseas has included trekking in Nepal and Tibet and watching the sun rising behind Mt Everest, hearing the roaring thunder of avalanches on nearby mountain sides and enjoying the solitude. Other travel has included: England and narrow country roads and castles; Barcelona and the wonderful, creative Gaudi buildings; France and the first century Pont du Gard and the very modern Millau Viaduct; Italy twice, with a recent walking trip in Puglia and on a tour in Sicily, both with Italy with Pleasure.

After spending several years renovating their current house and creating a rambling garden predominately with native plants, she hopes to spend more time with family, catching up with friends, reading, writing, walking the beach, photographing wildflowers and protecting and conserving the environment.