An interview by Anne Kane in January 2018.

At the end of 2017, Howard Kinns decided to finish his many years of generous contribution as tutor of the Hurstbridge Bridge class. This class has been one of Nillumbik U3A’s longest running and thanks are due to Howard for all he has offered. In the following words, he has kindly shared his interest in bridge but also in other courses and as a member of Manningham U3A. They are a wonderful reminder of the sharing and receiving that is so much part of this great organisation. Thank you, Howard, and good wishes for your continued enjoyment in lifelong learning. Anne Kane. 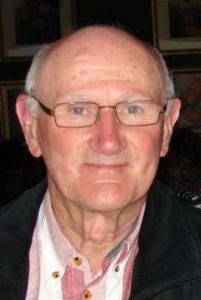 My introduction to the card game bridge occurred in about 1965, when I was teaching Mathematics to diploma students at Swinburne, before it became a university. The maths staff shared a rather large common room with individual desks around the walls. At most lunchtimes, four of us played bridge, as it was then. Bridge as a formalised card game is less than 100 years old, so fifty years ago it was a pale imitation of the game today. After a while, we decided to enter a team to play competition bridge in the Melbourne Bridge Club. I can’t remember how well we performed as a team, but I can remember that there was much discussion after each evening, mainly focussed on interpretation of the rules and conventions (which were at that time still being developed).

In 1968, Isolde and I married. We had met at Swinburne where Isolde was a teacher in the girls’ school. We moved to Canberra for an appointment at the ANU, where I worked and continued my academic studies. We returned to Melbourne in 1984 and bridge became a distant memory. When I finally retired (for the second time) in 2001, Isolde realised that it would be difficult for me to cope with no ongoing interests, so she suggested that I join the Manningham U3A bridge group. I also joined the Manningham recorder group, which met once a fortnight. This interest has remained and I currently play once a week with the Deepdene recorder group led by Kathy Conlon, and coached by Barb Praetz.

In 2010, when Sabi Buehler was President, Isolde and I joined the Nillumbik U3A and the bushwalking group led by Rob Gardner. Later, Bob Stubbings and I offered to run a classical music group, which met each week at the Calvary Retirement Village in Greensborough for around a year. Then someone suggested that I start a bridge group at Hurstbridge, catering for beginners. This was the beginning of several years of enjoyable interaction with over forty people from all walks of life who decided that they would like to learn Bridge, extend their card-playing skills to bridge or simply extend their knowledge and experience of the game. Classes varied in size from a maximum of twelve to a minimum of four, the latter being during mid-winter when some class members fled north to escape Melbourne’s cold winters. In part compensation, one class member who had moved permanently north used to return to Melbourne each summer to escape the northern heat, and would re-join the Bridge class!

Through the bridge classes, I have met many interesting people, and this has enriched my life. Also, my ability with bridge has increased. As many tutors will acknowledge, you can’t talk the talk until you walk the walk. At the end of 2017, I decided to hang up the Standard American Yellow Card Bridge cheat sheet, and spend more time in other activities – in particular, recorder playing with the Deepdene recorder group and sailing small yachts in Westernport and at Sugarloaf reservoir.

When Graeme Forbes read the article above, he recognised a long lost friend and sent in the following article. Howard was sent the article prior to publication and replied as follows: “The facts in Graeme’s article are all accurate including, I embarassingly acknowledge, the 100mph along the Hume Highway. After I left Melbourne in 1968, my interest in Rileys continued for around ten years, before I started commuting on rough unmade outback NSW roads which challenged the wooden framed bodies of Riley cars. Since returning to Melbourne, I have contacted the Riley Motor Club to pass on to them some books and memorabilia – part of the process of ‘down-sizing’.“

When I saw that Howard Kinns had retired as a U3A Bridge tutor, I then looked at the photo and memories flooded back. The name was unusual enough, but the mugshot said it all!

As a callow youth (around 16 years old), my younger brother and I joined the Riley Motor Club as we had both developed an interest in the marque. I’m sure many of the U3A demographic would remember the ‘Riley’ brand which had the slogan “As Old as the Industry, as Modern as the Hour”.

The British Motor Corporation were still making cars with the ‘Riley’ badge in those days (the late 1950 and early 1960s). Later models, which still had the Riley-designed engines, were far ahead of their time in many ways since they were first introduced in the 1930s. The last Riley models were ‘badge engineered’ versions of what had become the nationalised ‘British Motor Corporation’ (BMC) product range.

You could buy BMC cars using the same body but a different radiator grill from a number of different traditional British brands (including Austin, Morris, Wolseley, MG and Riley). Most of these models had largely the same basic engine. Some of the more ‘sporting brands’ (like MG) came with twin carburetors , but the Riley had a twin carburetor hemi-head high cam design with short push rods (which allowed a higher revving engine), even though the engines were a long stroke design (which used a lot of oil – typically a pint or so every tank of fuel if driven hard – due to the high piston speeds). 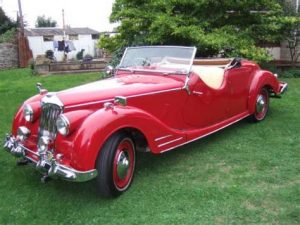 Howard had a model known as a ‘Roadster’, which was a 2½ litre convertible with a single front bench seat. Howard had converted the column shift gear lever to a floor shift (much more sporty!). There were very few of this model in Australia, but both my brother and I (although under 18 at the time) owned the 4-seater sedan version of the same car (model circa 1951-52) which we were restoring to have these somewhat unique cars available as a daily drive (after all, these cars were only about 10-15 years old at the time and they could easily leave the then most contemporary models available behind in a cloud of oil smoke) and something to use to enjoy the camaraderie of the Riley Motor Club.

At the time, Howard lived within a few kilometres of our parents’ home. If I remember correctly (it was over 50 years ago), he was still living with his parents near the golf links in East Brighton. He was kind enough to come and collect a pair of enthusiastic teenagers (also living at home in East Brighton) to take us to the monthly club meetings in Oakleigh.

Howard, who had already started to mentor enthusiasts at the time, was crazy/brave enough to take me on a Riley Club trip to Wagga Wagga where the club met up with our Sydney counterparts for a weekend of yahooing, hooning, ‘gymkhana events’ and – for the older members (and even some of the younger ones) – a bit of drinking.

After the events finished, we generally came home down the then two lane goat track known as the Hume Highway. We drove in convoy at around 100 miles per hour (it was long before we had the current speed limits). The consequence was then the next month or so was usually spent fixing all the on-going maintenance requirements on these highly stressed machines after their annual high-speed tour.

I want to thank Howard for his mentorship in my teen years, He took my brother and I under his wing and helped guide us through those precarious teenage times. It sounds very much like he has continued in the ‘Riley’ spirit mentoring U3A members in the finer points of Bridge, maybe we will catch up again in the future. I truly hope so.

Howard, congratulations on your service to the community over the years, you remain awe inspiring.