An interview by Judy Vizzari in February 2018. 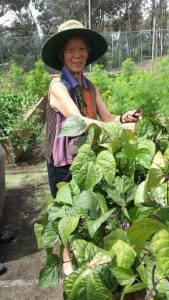 Duang Tengtrirat lives with her husband, Rob, in the back blocks of Research. Today I'm visiting them. I want to hear Duang's story which, I suspect, will be one of a challenging journey through many countries, a story peppered with trials and achievement. I know a little of her love of cooking, food growing, catering business and prize-winning writing and of her popular catering for U3A events, but want to hear more.

On a journey of discovery

The day is hot, 30+ degrees Celsius. I set off along Reynolds Road in the hills of Research and soon find myself passing through the kind of untouched bushland you'd only expect to find further away from suburbia – hard clay, ochre-coloured earth, golden clumping grasses, tall eucalypts, a canvas of soft, dry olive greens and browns all bathed in misting dust and backed by brilliant blue sky. Beautiful? Yes, in a wild, Australian kind of way, but not the sort of land which looks, to me, like good farming country. I'm intrigued to find this terrain so close to Eltham.

The road is steep and my tiny car clings to its up-slopes and down-slopes like a cockroach attaches to the walls of a kitchen cupboard. A left-hand turn sends me bouncing over an even bumpier unmade road, then along ridges and gullies and past impressive entrances which, I guess, lead to equally impressive residences – I can't see them. Adventure is certainly in the air. I'm relieved to finally arrive safely at my destination. 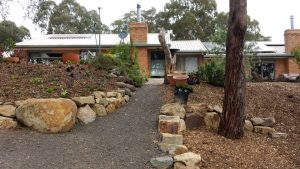 The pale brick house is situated close to the crest of a hill. It's set back from the road amongst tall eucalypts and follows the curve of the land in a low sequence of rooms featuring large windows which seemed to invite the outside in. Two chimneys extend upwards from the roof and I image how pleasant it would be to sit inside the house on a winters' day, warmed by a fire and watching the sway of branches and scurry of clouds in the wildness outside.

Duang greets me warmly. She's a slight woman who exudes calm energy. We're inside the large kitchen/family area now and I watch as she moves quickly and with the confidence of one who is comfortable in their surroundings. I've been invited for lunch and look forward to her meal – her culinary skills are legendary. Rob, a man of cheerful demeanour and neat white beard, joins us as we sit to the table. The plan is that my interview will be conducted à la Annabelle Crabb's Kitchen Cabinet television series, but with a slight change of format – there's no need for me to help with the cooking.

A taste of Thai

Whilst I can't claim to Annabelle's interview skills, I can certainly attest to Duang's cooking ability.

What she serves is delicious and, importantly, her ingredients are sourced almost entirely from her garden – how fortunate I feel to be treated to such fresh, colourful and tasty food.

I have already heard a little about Duang's early childhood in a remote village in northern Thailand and now I am eager to know more of her fascinating journey to Australia.

During our meal, she and Rob reveal their past. She was born in the late 1940s, the youngest of 11 children and, from a very early age, was responsible for vegetable growing and road-side produce sales to contribute to the family income. Duang was also an extraordinary student – during her adolescence, she received a scholarship to study in America where she remained for a year before returning to Thailand.

It was through the support of her brother, who was studying Medicine in Bangkok, that she then obtained a scholarship to travel to Australia to study Nursing. She was 19 years old and it was then that she first met Rob. Duang completed a Nursing degree before returning to Thailand.

Back home she utilised her knowledge of languages in a demanding and responsible role as an interpreter, but never lost her will to travel. An opportunity to return to America on a scholarship arose, and she grabbed it. This time she completed a post graduate degree in Counselling. There, she married and her two children were born. A true entrepreneur, Duang started a successful web-based small business selling beads and also worked part-time as a locum chef – her ability to cook for large groups was a useful skill she had acquired whilst working as a girl alongside her mother in their Thai kitchen.

Eventually Duang returned to Australia, to rediscover her past and to reconnect the romantic link she and Rob had shared – one which had broken many years earlier.

Now they enjoy a busy and fulfilling life in the hills behind Research. Duang's children have remained in America and in the years since the 1980s they have produced four grandchildren. Flights between Thailand, America and Australia are commonplace as Duang shares her time between her families on three continents. She is looking forward to reuniting with them all in Thailand for a 70th birthday celebration in later this year.

Her journey includes a liberal sprinkling of romance and chaos, trauma, failure and successes. Her story sounds like the synopsis of a novel and, I'm sure, would make a fine film script. It attests to her curiosity, vision, determination and ability and is inspiring – I'm fortunate to have been able to record a little of it.

Now I ask how Rob and Duang how they have managed to produce their varied foods in such obviously difficult gardening conditions. They enthusiastically describe their path to planting success.

Their trial and error journey started ten years earlier, when they found that no amount of effort stopped the native flora and fauna – wallabies, as well as rabbits and deer, from competing with the vegetable interlopers. Not to be outdone, they improvised and their results are impressive. Their garden is now flush with all variety of vegetables and fruits – after lunch we wander through rows of fertile planter boxes and I see colourful petunias and cosmos dancing amongst the vegetables – to deter white moths who apparently mistake them for territorial cousins, I'm told.

How beautiful it all is.

I know that Duang writes well, with simplicity and style. I know because for a few years we were both members of the Nillumbik U3A Eltham Creative Writing class led by Gillian Essex.

She writes so well that she won the ABC PocketDoc Short Story Competition in 2015 – a fantastic achievement given the thousands of competing entries. Her story, My Silent Day, about blueberry picking in the Victorian alpine area, identifies the range of attitudes encountered by newcomers to Australia and is a wonderful example of her inner strength. It is a beautiful story and available to hear and read via this link.

As part of the launch of the 2016 competition, Duang recorded a follow up story. The setting is one year later and Duang is again collecting blueberries. But this time her meeting is much more pleasant and heart warming. Listen to Duang's follow up story.

And the road ahead?

During the afternoon I learned about Duang and Rob's generosity and warmth, their trust in and commitment to each other, their families and our communities. Their will, strength and energy is to be admired.

That said, they had some news which could be classified as disappointing but which falls short of sad.

We all know that there are crossroads in our lives and at each encounter we have to consider which road to take. They recently confronted a crossroad and decided on a new path – the path to downsize and declutter. So, no more catering, no more workshops or Harvest Feasts and soon, no more challenging but rewarding acres to manage – no more Nillumbik U3A for Duang or CFA Research for Rob. They're 'going bush'.

Yes, they're leaving Research and heading north, possibly up near Gisborne, to establish a new home and life while continuing to maintain ties with family and friends and, no doubt, with their environment. And of course to build new ties in a new community – their gain, our loss.

And yes, that means the house is up for sale. Twenty acres of bushland, fruit trees, amazing fruit and vegetable growing facilities, abundant water, space for a family to grow. An opportunity for its purchasers to savour the best of country living so close to the convenience of suburbia – if only I was years younger!

Several hours after arriving, I left these two lovely people and headed for home feeling very privileged to have had the opportunity to visit. In my hands I clutched a brown paper bag replete with all manner of the freshest and shiniest of herbs and vegetables and, in my head, the start of a story.

So then to the bumpy road home.