An interview by Judy Vizzari in August 2019. 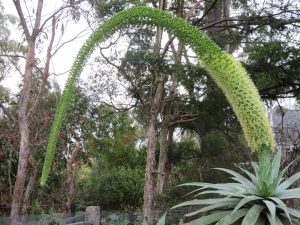 We're standing in Guy's family room looking out through a wall of windows in to an extensive backyard. In the distance, partially obscured by trees and bushes, is a fascinating plant. It's an Agave attenuata, from a genus of monocots, native to the Americas, and commonly known as the foxtail agave – because of the shape of its flower 'stem' (as shown in the photo). The base plant is big, being around 1.5 metres high. But the flower 'stem' adds another 3.5 metres, extending upwards in a graceful curve before dropping back down towards the ground. The flowers themselves are tiny and pale yellow. This agave would, I think, look equally at home in a Dr Seuss story book or meandering through the backdrop of John Wyndham's Day of the Triffid movie. But Guy, who has watched his plant with interest, tells me that it's bound to die soon, so its display of vigour and beauty is part of a reproductive cycle and a natural end to hopefully many offshoots beginning. 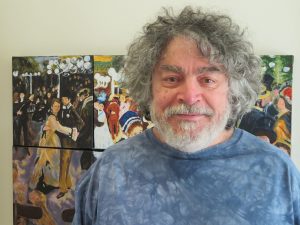 So what's all this got to do with my interview with Guy? Perhaps not much, but it does illustrate his interest in our environment, in nurturing growth and in accepting inevitabilities … even the demise of his agave plant. If applied more broadly, these qualities may be clues to the man that is the President of our U3A.

I've been a member of Guy's U3A WordPress course and Art History class and my observations have been that he is a confident man with a cheerful, even cheeky, smile, a voice gilded with his cultured English accent and a sunny outlook. What's more, he presents a memorable figure. There's a certain shagginess in his style with his wild grey locks and beard, there's humour in his penchant for animal adorned hoodies and there's common sense in his signature Akubra hat. He stands out in a crowd.

I start the interview by delving into Guy's past in order to find out more about his present.

We start at the very beginning 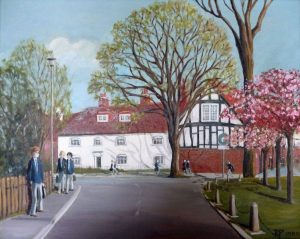 Guy says his childhood was happy. He was born in a town called Stevenage in Hertfordshire, 30 miles north of London. He tells me that the town was the subject of an experimental post-WWII plan for development (called 'new towns') which allowed a central old village to remain but to be encircled with a modern town. Guy's father was a doctor and his mother had an interest in arts and crafts. She bequeathed several of her artworks to him, including a painting of him and his brother in the street outside their 16th century school (pictured) plus a clay toucan – both are treasured possessions on display in his home today. Her influence seems to have endured, as Guy's house is now lined with an eclectic mix of paintings, drawings and 3D artworks and his garden features many freestanding, and sometimes comic, art forms, including quizzical creatures and wind-powered mobiles.

On completing secondary school, Guy applied to enter Cambridge University to study mathematics. He was accepted but first, as was the practice, he took a gap year and travelled to the United States to teach tennis to children and to travel. But when that fun year was over, his tertiary studies began: two years of Maths and then one year of Operational Research (which is the application of quantitative methods to the real world). He graduated in 1979 with first class honours.

Guy's work history has been marked by ten year turn-arounds. Below is a precis but if you want more, click here.

During the 1980s, he worked for Accenture (then called Andersen Consulting), a large consultancy firm which was, he soon learnt, more 'IT' than 'consultancy'.

At the start of the 1990s, he setting up his own management consultancy firm, Pareto Consulting, which specialised in business and IT strategy for government and healthcare organisations.

Near the end of the last century, he decided that he had "become a too much of a capitalist so he co-founded a 'think tank' called New Policy Institute, whose mission was to research social issues and develop policy proposals. Much of their work concerned poverty and social exclusion (google search "guy palmer poverty"). Guy says that the political debate about such issues in Australia lags badly compared with that in the UK and the rest of Europe.

For the love of a good woman

Susan is Guy's wife. She's sitting reading in the adjoining kitchen while we talk and from time to time she joins in. Susan is tall, statuesque, used to drive a sports car, works side-by-side with Guy in their garden (the day I visited they had spent the morning spreading manure to fertilise their vegetable plots), and has a warmth and easy glow that immediately puts people at ease. Guy tells me that they met in London when she travelled from Melbourne to work at Accenture so she has yet another worthy quality – she's a Melbourne girl!

It's no surprise that Guy was smitten. Smitten but, they both say, not enough for him to want to move to Australia. So why is home to Guy and Susan now a mudbrick house in South Eltham?

Maybe it's got something to do with a ten year itch?

Guy tells me that he woke one morning in 2007 and wondered how he could bring more happiness into Susan's life (no suggestion that she was unhappy)! When he offered to emigrate, "her face just glowed". A man of his word and a woman of delight, that's what they did and here they are.

After an initial period in suburban Balwyn, east of Melbourne, Guy and Susan decided that they wanted a bigger garden. Their preferred location was Warrandyte, but it was hard to find the flat land there that they needed to develop their dream of a substantial veggie patch. Eventually, after searching as far afield as Mount Martha and the Mornington Peninsula, they visited their current block in South Eltham and decided that it would fit their purposes. Perhaps the trees, the community and the local arts all played in their decision … but it was the land that convinced them. They moved here in 2012.

How do our members find their way to Nillumbik U3A? Word of mouth, web searches or through our Publicity sub-Committee's endeavours? One day Guy was walking through Eltham Village when he came upon Mal Harrop manning an information stall which promoted Nillumbik U3A. Mal must have been a good salesman, or perhaps the organisation sold itself, because Guy signed up on the spot.

So, seven years ago he commenced as a member of Andrew Leopold's Science class and Brian Ellis's Philosophy class. It wasn't long before he began tutoring a broad and fascinating range of courses including History of Modern Art, History of Traditional Art, The Science of Veggie Growing, How to Build your Own Website in WordPress, Quantum Mechanics, Special and General Relativity, Evolution and Genetics.

With his background in consultancy and information technology, plus his interest in politics, people and communities, Guy is a natural leader so perhaps it was inevitable that he would become involved in the management of this organisation. He joined the U3A committee in 2016, became Acting President in 2017, was elected President in 2018 and was then re-elected earlier this year.

So what have I learned about Guy Palmer?

I remember Guy said to me once, "I like to reward effort" and his comment engendered some curiosity in me. Perhaps it provides a clue to his personality – he is a man who cares about people and values their input. He's generous in giving his time, inclusive in his willingness to listen to others and tireless in his efforts to promote 'living well' through the organisations that he works with. As well as our own U3A, there's quite a list of 'others', including Local Food Connect, Eltham Farmers Market, Incredible Edible Eltham and Sustainable Gardening Australia. He also writes a regular newsletter about local food happenings which he would love you to sign up to receive.

So if you've got an idea that needs testing, or a skill that needs using, or a gripe that needs airing, then Guy is your 'go to' man – easily reached by replying to this newsletter or through the U3A Office.

Guy is talented and busy. Like the lion in The Wizard of Oz, he's courageous (though that lion took longer to realise it) and, like the Lion King, he's a born leader. So if you see him, enjoy his humour, honour his achievements and support his initiatives as they are also ours. But just remember that this woolly, sweet-tooth, chocoholic appears to have a soft underbelly, so tread carefully.

Our interview over, Guy walks me out via their multi-bedded vegetable patch. We greet the chickens en route then continue to my car, which is parked between an orchard and a bed of succulents and cacti – a balance of plenty and spiny survivors.