An interview by Judy Vizarri in September 2018. 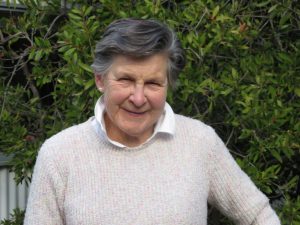 I'm driving down to Eltham South. It's a fine sunny Spring morning and everywhere is evidence of surging growth – the yellow, lime and purple of Winter's end splash broad strokes amongst eucalypt greens. Somehow this blending of colour reminds me of our own Nillumbik U3A. How, you might ask. Nillumbik U3A is a composite of volunteers working together to provide mutual benefits. So how does that equate with our landscape? Perhaps, at a glance, what I see around me is a canvas of Nillumbik greens, some claiming foreground visibility while others blend into the background. So too our members may be more or less visible and, like the range of spring colours, each member has their own special value or colour.

Enough wandering. Just as the radio gives me another update on Malcolm Turnbull’s leadership decline, I pull up outside Jan Aitken’s house. Whilst Malcolm’s story sounds like a political echo, I know little of Jan’s story … but I'm sure it will be more uplifting.

Her home is a wonderful 1980s Hamish Knox build. The street level space appears to be a large, hexagonal room (though Jan says it’s actually closer to a Star of David floor plan) with minimal divisions. It’s built over an old Eltham cottage, so seems to float high amongst the treetops and welcomes visits from the noisy miners and lorikeets who tap at the windows and squabble over ownership rights. Violet blue hills can be glimpsed far beyond.

I ask Jan about her roots. She tells me that she’s a Sydney girl but that her family always had strong ties with Melbourne. She spent her youth in Sydney, was educated there and qualified as a Humanities teacher. She then taught at two secondary schools in New South Wales before deciding to switch careers and, at the age of 22, moved to Melbourne to train as a nurse at the Royal Melbourne Hospital. On completion of her degree, she remained here.

Jan was able to blend her training in both teaching and medicine and applied her knowledge to the joint fields of psychology and medicine. In particular, she worked with IVF clients during the infancy of that science and learned about the issues involved. She was then invited to participate in government advisory bodies and committees assisting with the creation of laws to define new science and to protect human rights in these areas.

Fast track to the late 1990s when Jan moved to Eltham. It was then that she became aware of our Nillumbik links with the Indigenous owners of this land. Through reading, meeting members of our Indigenous and non-Indigenous communities and visiting local Wurundjeri sites, she chose to support the NAIDOC cause and joined the Nillumbik Reconciliation Group (NRG). She was quickly promoted to the role of President and she has continued in that capacity for the past 11 years.

We talked about NAIDOC Week in July this year and she spoke enthusiastically of a coming ‘out of NAIDOC Week’ event that will support the earlier initiative. It’s a ‘Forum for Aboriginal Voices’ entitled “Because of Her We Can” and is to be held at St Margaret’s Anglican Church, Pitt Street, Eltham on 16th September. The Forum will be jointly hosted by Do Justice St Margaret’s, the NRG and Eltham’s Amnesty International group and they are hopeful that many of our community will attend to learn directly from Aboriginal people about their culture and achievements and to participate in a Q&A session. The presenters are proud to present three Aboriginal women from different backgrounds to speak at the Forum. Click here to book.

Along with Anne Kane and Rob Gardner, Jan is currently talking about offering a U3A course focussing on the local Indigenous history and says they “already have enough information for a whole year!” And that’s only a starting point. Sounds like a great course, watch out for it commencing in Term 4.

I asked about her involvement with Nillumbik U3A. She is currently a member of the Eltham ‘Drawing and Painting’ group and says that she is loving the learning as well as the camaraderie amongst its members. In the past, she enjoyed Brian Ellis’s political discussions and, in the future, plans to enrol into literature studies. Along with her other commitments, she seems to lead a busy life.

There seems to be so much more to Jan than what we have covered in the past hour, but my time is up. On the way home I’m confronted once more by the birds and the trees and my mind strays to the question on colour. What colour should I allocate to Jan? To me, blue seems to vibrate with a sense of care, maybe it’s the colour of social justice? I remember the vibrant cerulean blue skies so visible through her windows, my decision – blue. I’m dismayed to see, later, that either green or orange are the colours which have been assigned to social justice by Mr Google! But it’s time for some independent thinking … I’ll stick with blue.