Posts by various of our classes

The posts below include the following classes: 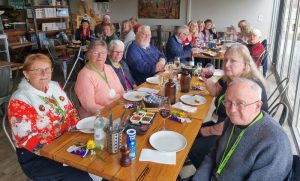 On 9th December, our Luncheon Group held their final lunch for the year at Nillumbik Estate in Smiths Gully.

On 4th November, the Diamond Valley Big Band, who are becoming part of Nillumbik U3A, filled the Eltham Community and Reception Centre for an evening of big band jazz music. As illustrated by the photos, there was a lot of dancing. 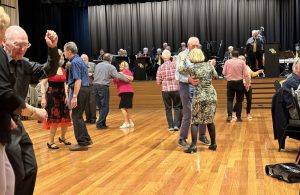 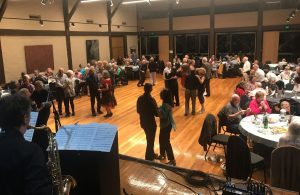 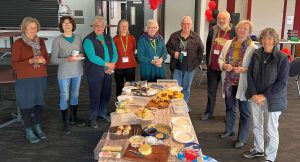 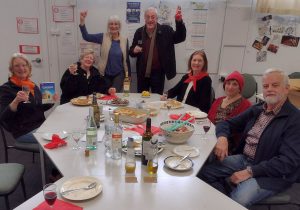 We decided to have our mid-year social gathering at the Old Eltham Courthouse this year rather than at a restaurant. It was very successful – there was more space to move and we could hear each other speak. Everyone prepared a short presentation in Greek and we brought a variety of Greek dishes including meatballs & salad, tzatziki, galaktoboureko and baklava. Γειάσας!

[Editor: I looked up the word Γειάσας! and it apparently means “bet you are jealous!”]

The time is 1:45pm on a Friday afternoon and cars are winding their way towards Eltham Lower Park where you'll find the Diamond Valley miniature railway, dog training, cricket and lacrosse playing areas. Graeme [Russell] is the first to arrive as he has the keys to unlock our playing premises. He has to be careful to press the correct buttons or, should I say, numbers as any error would set off the burglar alarm system and who knows what would then happen.

Once inside, the lights and (depending on the time of year) the heater or cooler are operated, just like the three bears not too hot, not too cold, but just right. By this time, other eager members have arrived and get into setting up the tables and chairs with table cloths, writing or scoring pads, pencils, everything needed for the afternoon's entertainment and, of course, cards and cubes with their little reminders for those rare senior moments. The kettle is on, the chairs are filled, partners are taken and the cards are dealt.

There is silence for a moment while players study their hand, looking for that elusive joker. Sure there's one in every pack, next best are the bowers left and right, but none are in sight. Oh well, how best can I assist my partner, let's see. What(!), it's my call? Oh dear, ah, yes, no, alright, six spades. After picking up the kitty, and remarking that it would have been much better for the opposition, the hand is played with cunning and mirth. The two hours rapidly pass in this happy manner. Then tables are folded, chairs and equipment put away, the door locked and the alarm reset. We happily head home with a spring in our step. When will this happen again?

With my Club I would hit this coronavirus
Then bury it with my sturdy black Spade
No Trumps here with his fake news
No Misere though times are tough
But those Diamonds are sure to sparkle
And our happy Hearts will cheer
When we are rid of this coronavirus fear
I look forward to when we are able
To gather around the U3A card table.

Would you like to step inside the life of an ‘untouchable’ growing up in India, journey to the court of Queen Elizabeth II with all its intrigues, or maybe experience the life of a female reporter in the Second World War? This is a snapshot of our reading so far this year. Why not come to the Second Tuesday book club and see what else is in store? 2nd Tuesday of each month, 10.15am-12.15pm, Eltham Library.

There have now been seven years of continuous ‘Music Tutti’ at Hurstbridge each Thursday from 10.45am-12:15pm. One of the original presenters, Maree Krohn, is still running the show, although she is now sharing the podium with four or five other enthusiasts with specialist skills. It used to be VCRs and CDs that featured but is now DVDs and films, including: the evolution of music from the beginnings to the present day; significant composers; major works; guest speakers and artists; and the history of it all. Some of the original cast are still with us, and wouldn’t miss their Thursday ‘fix’ with the friendships forged. It won’t end whilst there is music to be played! 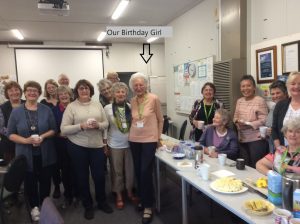 The Tuesday afternoon Mahjong group took great delight in helping Margaret celebrate her 95th birthday earlier this term. Margaret is truly an inspiration to us all. At 95, she plays Mahjong every week except when she is on Probus trips or has family commitments – often travelling interstate as the occasion arises. We look forward to her turn for afternoon tea as we know we will be treated to some delicious homemade baking. She is always willing to share her recipes via email. Hearty congratulations Margaret on reaching 95, keep up the good work and we all anticipate an even bigger celebration for your 100th! 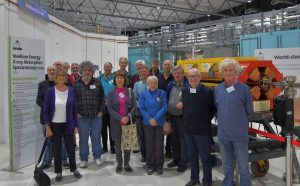 The Weirdness of Light class visited the Synchrotron and an interesting time was had by all. Thanks to Pam Jenkins for the idea and to Chris Livingstone for the photo. 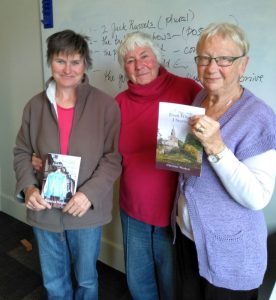 This year the U3A Friday Creative Writing Group at Hurstbridge has seen a number of works come to fruition and we are very proud of what our group has achieved.

Sabi Buehler’s memoir about her mother’s life and arrival in Australia, A Life in Two Suitcases: Gundel’s Story, has recently been translated into German and, in April, Sabi travelled to Germany for the official launch. Whilst there, she sold enough copies to pay for her short holiday in Croatia. The original version of Sabi’s book in English is available online through Amazon, Booktopia, The Book Depository and major book stores.

In November, the group hosted the launch of The Fraught Ambitions of a Man, Rebecca Hayman’s latest novel. Thank you to the U3A members who were part of the 40+ crowd at Eltham Library. Rebecca’s friend Luba Gong, who grew up in China, spoke of how accurately Rebecca has captured Chinese village life. Rebecca then spoke about the special man that she and her family met while living in China and on whose life the novel is loosely based. She read to us some enticing passages about her main character Fui Lai, while being careful not to give away the story. It was such a friendly gathering chatting over nibbles that library staff needed to move us on at the end of the night. If you would like to obtain a copy of Rebecca’s book, contact her by email (becca_mike@yahoo.com).

Also in November, Chris Winkett published and launched a beautiful memoir, A Long Way from Where I Started, about her young life in England and her family’s migration story. Chris’s family, her friends and our writing group celebrated this significant achievement at St Margaret’s church hall. Instead of selling her memoir, Chris gave books away but offered people the opportunity to donate to the Asylum Resource Centre and this raised nearly $1,000 for the cause. 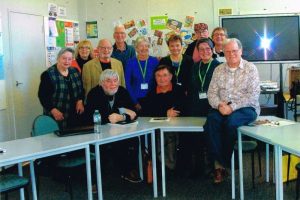 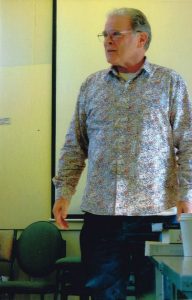 The Shakespeare Rocks group recently had an enlightening and entertaining presentation from Dr. John Bigelow on aspects of Shakespeare’s comedy Twelfth Night, as well as his sonnets and poems. John’s background is philosophy but he has a passion for Shakespeare, particularly the sonnets.

In Twelfth Night, John provided insights into the circumstances of Mavolio’s imprisonment and torment after he is tricked into making a buffoon of himself. The ‘Fool’, disguised as Sir Topas, questions Malvolio on aspects of Pythagorean philosophy – he answers correctly – a conversation that could have seen him charged with heresy. In Elizabethan times, this could have been tantamount to a death sentence. It sounds like heavy stuff but the play, despite some typically dark Elizabethan undertones, is very funny.

The first sonnets were written in the 14th century by Italian poet Francesco Petrarch. Over the years, the structure was modified by French and English poets but Shakespeare returned to the original format. Shakespeare wrote his sonnets over a number of years but they were first published in 1609. They were then almost completely ignored for over a century as lesser art forms until championed by the romantic poets John Keats and William Wordsworth in the 18th century. Classically, the format follows 14 lines of iambic pentameter; three, four-line alternately rhyming quatrains; ending with a two-line rhyming couplet. Whilst Shakespeare predominately maintains the classical Italian structure, he is able to add non-discordant departures almost at will to suit his message.

The sonnets cover broad aspects of love from romance to more base desires. In all there are 154; the first 126 are dedicated to an unidentified and, much speculated upon, beautiful young man or boy, whilst sonnets 127-152 concern tormented dealings with a mysterious ‘dark lady’. Sonnets 153 and 154 appear irrelevant to the previous 152, although on a similar subject of love.

Shakespeare offers something for everyone’s interest, theatre, literature, history, philosophy, psychology. But, of course, there is pure enjoyment in just the beauty of the words.