An interview by Judy Vizzari in February 2019. 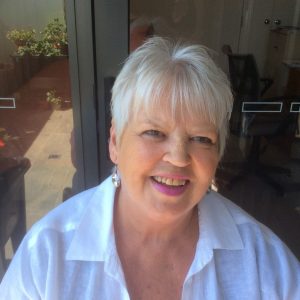 Pauline and I have met most Fridays during the last three years at the U3A Friday morning Creative Writing group. Now, her circumstances are changing – she's an Elthamite who has decided it's time to leave our writing group and, also, Eltham. We're sorry to see her go and wanted to acknowledge her contribution to the group as a writer and, in 2018, as our co-tutor.

It's a Friday afternoon and we're sitting in my lounge room. The sun is streaming in and the birds outside are making more noise than the passing traffic. We have plenty of time to talk and I'm interested to learn about this woman who sparkles with enthusiasm and warmth. I'm going to ask about her association with U3A, but we begin her story elsewhere.

Pauline grew up near the APM paper mills in the now trendy area just over the Yarra River. She describes herself as a happy young girl living in the warmth of a loving family, a curious girl who was intrigued by maths and science and had an appetite for learning.

She recounts how, during August in Grade 4 primary school, she was advanced to Grade 5 then to Grade 6 the following year – a promotion which was largely unnoticed at home – and remembers how expectations of girls in the 1950s and ‘60s were quite different to those of today. Despite her love of learning, she accepted her parents' practical views and, after completing secondary schooling and finding full-time employment, commenced an Accountancy Degree at night school.

Pauline remembers how, even then, she had a special way of dealing with life's challenges – by writing. "It was my outlet", she says, "if I was upset about anything I'd just write … and write and write and write!" Perhaps her writing was, and is, the thread which stitches together her life's tapestry.

Within three years of commencing night school, Pauline's world had changed. By then she was set for marriage, motherhood and a move to the outskirts of Melbourne.

The parenting years (her "most important job") and her working years (a demanding blend of “satisfying” home and work) passed by – by then, she had worked in book-keeping and accountancy, had seen three daughters married. and had become an active member of Eltham's lively community. So, Fourteen years ago, in the words of Gough Whitlam, she decided "It's time" (for change).

In 2004, Pauline retired from the workforce and commenced her 'third age'. Perhaps retirement can be likened to opening a door – the other side may offer a full and vibrant life or an empty space – it depends on the retiree and their circumstances. Pauline's door opened onto a place where she could nurture her love of learning.

But how to start? In 2004, she enrolled into a Cosmology course provided by Banyule U3A. A year later she commenced a writing course at the Living & Learning Centre in Diamond Creek … and stayed for seven years. Then, in 2011, she joined Nillumbik U3A and, over the past seven years, has fed her thirst for knowledge by undertaking a range of courses. Amongst them, she particularly remembers Guy Palmer's Charles Darwin's Theory of Evolution ("excellent, fascinating"), Noel Butterfield's Armchair Theatre ("I absolutely loved it"), Noel's Poetry ("I've been exposed to so much poetry; really, really good"), and, predictably, Gillian Essex's Creative Writing Group ("The minute I walked in, it was right"). "On my 64th birthday, I was outside Gillian's house and I sang 'When I'm 64' to a few class members. This occasion still serves as a pleasant reminder of a very satisfying association."

So where to now? Pauline and her husband, Russell, have purchased an apartment in Templestowe and are due to move in early 2019. For someone so obviously in tune with Eltham, I wonder what prompted them to make this change. Her answer is well-considered: "It's not that I'm not loving where I live, but I'm taking care of the future for the two of us no matter what situation develops."

So is she really breaking off her association with Nillumbik U3A and Eltham? No, not completely. Pauline is looking forward to attending more of Noel's Poetry classes and may join Guy's The Weirdness of Light science course in Term 1. These are timetabled in manageable time slots – no early morning rushes from Templestowe! We'll miss her at Creative Writing but, as our congested roads become increasingly challenging, I agree with her choices. She says she'll also seek out courses at her local U3A in Manningham and doubtless they'll offer stimulating learning and social opportunities too – their gain, our loss.

And then there's the book – a family history. "I've got lots of stories left in me", she says and in this time of change they come to the fore and provide much fuel for her memoirs. I'm sure her humour will pervade this journal and be treasured by her siblings, children and grandchildren.

Pauline is a strong advocate of a cause which is close to her heart, juvenile diabetes. She's published a fundraising book called Paraphernalia and taken on a little targeted public speaking/stand-up comedy too, to support the cause. She says "l like the limelight" – she has a gift for enthusiastically embracing what others might find daunting. So yes, we'll miss her cheerfulness, her smiling eyes and her honesty.

We'll also miss her cropped white hair and her bulging handbags, too. We'll miss her stories which were told with humour, absorbing stories which focussed on her family and life experiences, stories which sometimes slipped into entertaining fiction. There's another form of Pauline's writing we'll miss, too, her rhyming poetry. I'm always fascinated by her ability to produce often funny and always rhyming lines at a moment's notice.

It's Pauline and Russell's time for change, for a new beginning. I suspect that their timing is perfect and hope that this new chapter will provide them with security and interesting challenges. It's good to hear that Pauline will still visit Eltham, she'll still be a U3A member and may still be encountered ‘down town.' And for Russell, well, I know that golfers are a tough bunch – it takes a lot to stop them!

I wish them well on their journey.