Much of this blog comprises a series of articles written by Jim Poulter Thank you, Jim, for your generosity in sharing the articles with us!.

Jim has tutored U3A classes in Australian History for many years and is a frequent guest speaker at our First Nations class. He also writes the ‘Birrarung Stories‘ for the Warrandyte Diary newspaper. Jim has known and worked with many iconic Aboriginal Elders and tribal people who have trusted him with their knowledge.

Over the 25 year neo-colonial period from 1850 to 1875, one Aboriginal figure, Simon Wonga, stood head and shoulders above all others, yet he is hardly known. Wonga’s vision for the Kulin people within the new world confronting them was to establish a viable economic base as farmers, whilst still retaining their cultural roots. Against enormous odds and skulduggery, Wonga achieved the establishment of Coranderrk Aboriginal Station at Healesville in 1863. Coranderrk went on to become economically and socially the most successful mission in Australia. The article maps Wonga's life journey and shows how William Barak continued Wonga's legacy after succeeding him as paramount Kulin leader in 1875.

The names of the principal characters involved (William Buckley, John Batman, John Pascoe Fawkner and William Barak) are well known to the public. However, this article endeavours to lift the veil on this period of our colonial history through an understanding of the Aboriginal perspective. A little understood narrative dictated by William Barak in 1888 is examined to reveal new insights about the influence of William Buckley on Aboriginal thinking, and the location of the 1835 treaty meeting with Batman.

This year, National Reconciliation Week was from 27th May to 3rd June. One of the best events was an online series of talks organised by Yarra Ranges Council. We have already used the Stan Grant talk, the Welcome to Country, Dot Peters memory and Fire Stick Burning in our Zoom sessions.

One of the books that changed my thinking was Dark Emu by Bruce Pascoe (now also available in a children’s version as well). Here is a 15 minute Ted Talk by Bruce which summarises the book.

Melbourne is famed for its variable weather of 'four seasons in one day'. However the Kulin people of the Port Phillip region defined eight seasons, but not just by the weather patterns. What had to be done at each particular time of the year also helped define each season. These annual seasons were also related to the Aboriginal use of a 28 day lunar month within a 13 month annual calendar. This was however not rigidly fixed as each coming season was preceded by a sequence of environmental signals in insect, animal and plant behaviour.

One year after the arrival of the First Fleet at Sydney Cove in January 1788, a smallpox plague mysteriously broke out in April 1789. It spread through the whole country, killing 90% of the Australian population. The event is preserved in legend, story and song.

The cause, course and impacts of this first ever Australian pandemic are discussed in the first three sections. The nature of Aboriginal resistance is then discussed, with the focus in the final two sections shifting locally to Melbourne’s Yarra Valley.

This article builds on the previous article about Aboriginal thought systems to show how those concepts and principles apply in practice.

Virtually no effort has been in the past devoted to understanding the status, integrity and merits of Aboriginal philosophy and religion. Everyone has heard of the concept of ‘The Dreaming’, but practically nobody knows what this actually means. It rates no mention whatsoever in the Oxford Dictionary of World Religions. Based on his decades of discussion with tribal people such as Donald Murrawilli and Elders such as Uncle Reg Blow, Jim offers some insights into the complex and sophisticated Aboriginal thought systems.

Over untold millennia, Aboriginal people developed knowledge systems that allowed them to live in sustainable harmony with the land. Despite being regarded by Europeans as ‘simple, primitive, pagan and nomadic‘, it was a society free of poverty, hunger, pestilence and war, with the highest common standard of living in the world.

Read Jim Poulter’s article entitled farms without fences (pdf), which discusses the nature of Aboriginal environmental management and how Aboriginal ‘permaculture farming’ was largely invisible to European eyes. The sections in the article are: 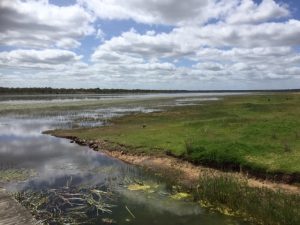 Participants from the First Nations course left a very hot Melbourne on 21st November to rendezvous with a beautiful cool change in central Victoria. We were on our way to Heywood to be shown around the various locations of UNESCO World Heritage listed Budg Bim. 28 participants and some partners were greeted by our guide – Leigh Boyer – and were shown many interesting, thought provoking and deeply moving locations.

World Heritage listing came after a ten-year campaign to gain recognition of the aquaculture designed by the Gunditjmara people over 6,000 years ago. These engineering works, built over generations at Budj Bim, allowed the Gunditjmara people to trap eels in a complex system of weirs, constructed channels and holding/growing ponds that run from Budg Bim to the sea. These supplied them with enough food to sustain them year-round in villages of stone huts, and to undertake trade. This is the first Australian World Heritage site to be listed exclusively for its Aboriginal cultural values. Placing Budj Bim on the United Nations heritage list will challenge the common perception that Australia’s first people were nomadic hunter-gatherers. Instead, the site shows a far more complex Aboriginal economy and lifestyle where people actively intervened in, and managed, the productivity of the country. 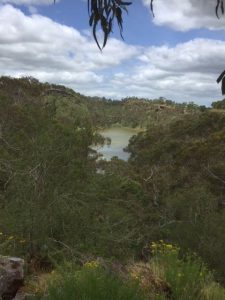 Colonisation and frontier wars put an end to this way of life and a population of 6-7,000 Gunditjmara people was reduced to 97. These disenfranchised folk were introduced to Lake Condah Mission. It was a sobering place to visit and reflect on the enormous life changes that these aboriginal people had thrust upon them.

We visited Lake Condah, partially returned to the Gunditj Mirring Aboriginal Corporation along with pockets of other land. Although the recent history of this land holds great loss and injustice, there is a sense from the Aboriginal community that they rest on a much greater and richer culture that they tap into to create their future and that inspires and gives strength.

We finished the next day at lunchtime at Budg Bim National Park. It is most impressive with a crater lake and views of Budg Bim. Our guide Lee shared the Creation story of Budg Bim as the old volcano looked down on us. It was our last magical moment and we were indebted to Leigh, not only for his eloquence, generosity and sensitivity to us, but also to the values of his people.

Thanks to Rob Gardner for organising this excellent trip. His care and attention to detail ensured a wonderful two days. Some local excursions are already planned for 2020 and who knows? Maybe we will wander further afield once again!

If you would like to learn more about our First Nations people, you would be very welcome to join our friendly and enthusiastic class. In 2020, we will be meeting at the Diamond Creek Senior Citizens at 3.15pm each Monday. 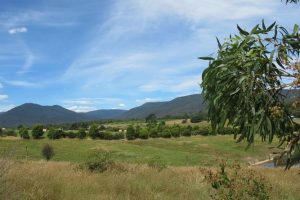 In the first term, the focus was on pre-settlement, with a particular emphasis on the life of the local Wurundjeri people. This included land management, language, social organisations and spirituality.

The following terms looked at the impact of colonisation and what was destroyed. Topics that followed on from this were Aboriginal heroes and white champions, Aboriginal activist movements, native title and land rights. Threaded through the history were presentations on Aboriginal invention, architecture, engineering and astronomy.

The course has been successful for a number of reasons. The facilitators – Jan Aitken, Rob Gardner and Gloria Wallace – have brought a wealth of understanding, personal experience and relationships to each topic. There have been a variety of guest speakers, including Aboriginal experts and leaders, as well as historians and published authors. Participants have enjoyed excursions in the local area, including Coranderrk, and viewed a variety of DVDs and internet sites. The participants themselves have also added richness to the course, sharing their own knowledge and researching to offer information on a variety of topics.

This coming term will look at significant Aboriginal sites throughout the country and there is a proposed trip to Budg Bim in south west Victoria. This is the country of the Gundijmara people – engineers of aquaculture, builders of stone houses and warriors defending country. In 2004, Budg Bim became the first indigenous landscape to gain Australian National Heritage listing and, in July 2019, it was inscribed on The UNESCO World Heritage List. 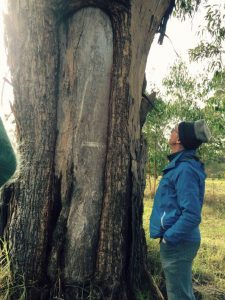 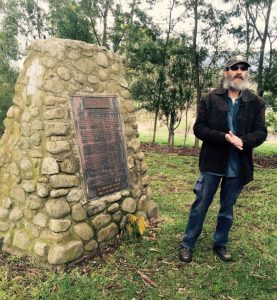 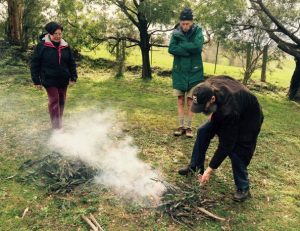 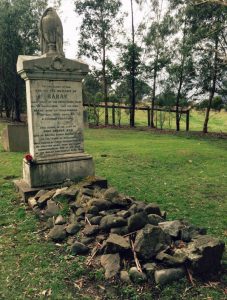 On 3rd August, five folk from the U3A Walkers group travelled out to Healesville to walk on some of the land that is known as Coranderrk and to participate in one of a series of events conducted by the Wurundjeri Land Council (WLC) to mark their annual Wurundjeri Week celebration.

We were met at the Coranderrk Cemetery by Elder Allan Wandin who welcomed us to his country. He conducted a smoking ceremony and explained how visitors were offered a plate of foods which showed what they could eat on their land. He also gave us a passport of a manna gum leaf.
Allan spoke movingly of the difficulty he had had in recovering the history of his people. Most records were discovered in the journals written by the early Scottish and Irish settlers who had more in common with the aboriginal people than with the English aristocracy. There is a now a dictionary of the language but no one speaks it in every day conversation.

As we trudged around in wet and freezing weather Bunjil, the wedged-tail eagle, circled over the beautiful hills, reminding us of ancient stories and a remarkable people.

We were fascinated by our tour of the cemetery, which held the remains of four hundred bodies. Most of the graves were unmarked, but the names of the deceased were listed on a board showing their tribal association and including several which were listed merely as “baby XYZ”. Holding pride of place was the tombstone of Barak, the great aboriginal leader who was influential in establishing a success-ful farm and many industries on Coranderrk.

Allan also discussed WLC plans to restore the reserve near Heales-ville (off Barak Road), the area where over 400 aborigines had been relocat-ed in the 1860s. They aim, by their efforts, to reflect the work of the dis-possessed people who lived there and to create an historical site; a place for all to visit, to remember and to enjoy.

The Wurundjeri people have al-ready removed a massive amount of blackberries, some over three metres tall, as well as many other weeds and they have replaced them with many original species of bushes and trees. A walking path will wind through the ar-ea to show off the “before” landscape.

The army building and gardens on another section will be returned to their previous state, as will the farm, which they propose to re-establish as a working venture.

Further study on the area and its indigenous peoples is available in the remarkable books that Mick Woiwood has written or online.

Coranderrk, a National Heritage Site, is well worth a visit. It was a government reserve for Australian Aborigines in the state of Victoria between 1863 and 1924. It is locatated 50km north-east of Melbourne.