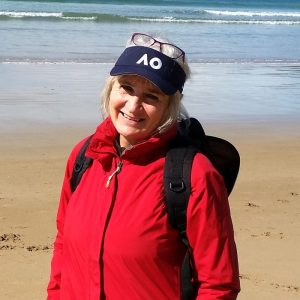 Membership of Nillumbik U3A: 3 years.
Membership of other U3As: no.
Reason for joining our U3A: having retired, I wanted to be involved in community activities and to explore my areas of interest: writing, reading, languages and philosophy.
Is this the first NU3A class you’ve tutored?: yes. I began as a volunteer in the U3A office this year.
Other U3A classes attended: Creative Writing, Spanish for Travellers, some of Brian Ellis’s lectures and the Thursday Book Group, which still attend.
Nillumbik resident?: I moved to Nillumbik 10 years ago to be with my partner. We lived first in Warrandyte and are now living in Hurstbridge.

I lived in Greece in the 1980s, teaching English while doing a Creative Writing course with the London School of Journalism. This is when my love of Greece and the Greek language began. I started studying Greek language in Athens in 1984, continued at Aristotle University in Thessaloniki and then as part of a BA in Australia at Victoria University.

I completed the Teaching English as a Foreign Language course in London in 1984 and a Certificate 4 in Training and Assessment in 2006 and these studies formed a basis for teaching languages. On retirement, I wanted to develop my proficiency in Greek and so returned to study at La Trobe University in 2018. Being a student at the same time as teaching allows me to understand what students want, including that learning should be fun!

I have always been interested in travel, writing, spirituality and philosophy.

The course content will be developed from various text depending on the participants and how much they want to spend (I am investigating cheaper options). My own textbooks on Greek language, used as the basis for classes at La Trobe University, will provide the framework for the classes which will be paced according to class needs.

I will aim to develop participants’ skills in reading, writing, grammatical rules, speaking and comprehension. We’ll start with the basics of Greek language including its alphabet which, while different from the English alphabet, has many similarities and is embedded in many ways in our culture. Our early focus will be on everyday language and phrases; eg, greetings, use of numbers, asking for and giving information.

I will offer the class weekly during Term 1 2020. How it continues will depend on the level of interest.\

My love of the Greek language prompted me to offer this class – it provides a place where I can share my knowledge of it and my passion for it with others.