An interview by Judy Vizzari in July 2020. Tony is the organiser of our Table Tennis Group and co-tutor of our Technology User Group. He also built and maintains our membership software. 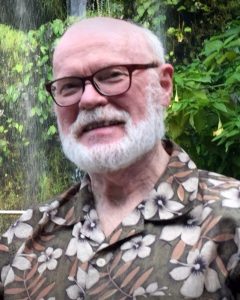 In the time of the Covid-19 pandemic, it would be easy to think that our Nillumbik U3A has ground to a crawl; after all we have no venues, few ‘in person’ outdoor groups meeting and, in some cases, no classes at all. We might assume that, apart from the weekly Gibber Gabber newsletters, nothing is happening … but we’d be wrong, this machine hasn’t been stopped by Covid-19, instead we’ve become familiar with doing things ‘other ways’.

So what has this to do with Tony Lee?

Many of you will know Tony but, for those that don’t, he is the organiser of our Table Tennis Group, the man whose inspiration it was, a few years ago, to propose a Friday afternoon weekly indoor session at the Diamond Valley Sports Centre.

You might also have met him during a Monday morning IT session presenting, along with four other tutors, discussions on various IT topics. But perhaps fewer of you know that Tony is one of the volunteers who manage the administration system which keeps our U3A running smoothly. More specifically, he is the man who built our administration and student enrolment computerised system in 2013, which introduced us to cloud-based technology. He has a backup team of Stuart Winstanley, Rob Rankin and Gerard Wood.

Before we look further at Tony’s current contributions, let’s look at his background.

He is a Melbourne boy – he lived at Mount Waverley and was the third of six children including two big sisters who, he says, “looked after me“. He remembers how, when he first enrolled at primary school, he joined a class of 102 students in prep, then skipped first grade and joined the second grade cohort to allow for tempering of class sizes.

As a young teenager, his future was becoming evident when he set up a wired telephone system to mates in three other houses via back fences and took the opportunity of road works to put a wire underground across the street to complete the job. Much later as a VK3XDL amateur radio enthusiast, he contrived with teaching colleagues to trial live talkback television lessons in electronics over the amateur television channels circa 1980 (‘on-air Zoom’?).

During his secondary years, Tony biked every day to The Salesian College in Chadstone and then, at the age of 16 and having completed his Year 11, he advanced, with an Education Department bursary, to RMIT in Melbourne. There, he completed a three year Diploma in Industrial Electronics, which qualified him as a professional engineer. The bursary specified that he would have to complete two years of practical experience and he did so at the Department of Civil Aviation.

The bursary conditions also specified that Tony would enter the teaching profession after his practical experience and so he joined the TAFE (Technical and Further Education) system and continued to work in it for some years. From teaching electronics at Box Hill TAFE, he switched to working in curriculum administration at the TAFE central office in Melbourne’s CBD then, later, he returned to Box Hill TAFE again; this time as Head-of-Department of Electronics. Periods at Preston TAFE as a Divisional Manger and RMIT as a Head-of-Division followed.

When, in 1998, the Kennett government radically downsized TAFE, Tony made a notable career change by entering the private sector at software development company Spatialinfo.

His role there was, he says, to “herd the cats“. It was a role in which Tony created cohesion amongst a number of competent software developers – “keeping them on track” – and managing various projects. Tony says he “loved it“. And that, perhaps, is a clue to the triggers which continued to influence his choices after he retired in 2011.

In 1970, during Tony’s first year of teaching, his career was interrupted by the war in Vietnam. He was conscripted and trained as a 2nd Lieutenant at Scheyville then completed time in Signals 6th Regiment at Watsonia Barracks. Later he served as an engineer at Albert Park Barracks. In all he served for three years and they were, he says, “very enjoyable years“. That period brought an end to his first small band (see below) and severely disrupted some serious bushwalking (he was president of a walking club).

When I asked him whether he was enjoying retirement, his immediate response was “I’ve still got a lot of responsibilities!” He seems to be a man who loves to be physically and mentally active.

One of Tony’s current contributions to our organisation involves updating, when needed, the administrative system that he created back in 2013. Recently he has made quite a few changes to the automatic feed of data from our administrative systems into the website to support work on the current website upgrade program. These are responsibilities which are sometimes quite time consuming (sometimes “too many” hours in a week, but most of the time “not much at all“) but which offer him an opportunity to use his broad experience.

Tony says that his wife, Lita, was a great co-worker in this project as an early office manager for Nillumbik U3A at Old Eltham Courthouse, advising him on the needs of administrative volunteers and how to set up the system to enable them to use it efficiently.

A man of action

Tony is a man of action – cycling with a group is still one of his loves (although with Covid-19 and the “too cold to ride”” mornings, that pleasure has been temporarily halted). In 2015, he rode with a Vietnam Veterans Group from Puckapunyal to Canberra and says that it was a six-day experience which “wasn’t easy” but that it he “loved it“.

Tony is also a music man – he has, since his secondary school days, played clarinet and saxophone. His love of music led him to join with two friends in a trio (the TNT Trio) which performed at weddings, dances and functions during his university days. Since 1979, he has been playing in the Diamond Valley Big Band and has performed at multiple events playing the big band music of the ’40s, ’50s, ’60s and ’70s. He also built and maintains their website and facebook page. He says “I was a founding member of the band setup in 1979 by well-known Eltham identity Cal Martin, now deceased“.

Add his membership of the Dandenong Ranges Big Band and leadership of his own group; J & the Jazzmen and you can imagine he must be busy. Amongst his gigs over the past few years are several which have been organised through Bill Naim for Nillumbik U3A.

Tony is one of our tutors – he facilitates the Friday afternoon Table Tennis Group although, at the moment, Covid-19 has put a stop to their competition. “It’s great fun, great for balance, good for hand eye coordination, great.” There are around 12 people in the group and they use two to three tables each session. He is enthusiastic about the sport. Now, with Covid-19 stopping things, he has set up a table in the garage at home and he and Lita play for about an hour each day. You can’t keep an avid table tennis player down!

He also “had a go at trying to start a walking football group“, where walking football is apparently a sport which is ‘big’ overseas – soccer for seniors. It seems that it didn’t take off in our U3A but you never know, maybe sometime.

So I return to my opening thought that, despite the interruption of Covid-19, there is plenty going on at Nillumbik’s U3A and Tony Lee is one of the people who are ensuring that we’re running smoothly despite the pandemic hiatus. It’s through his contribution, plus others, and by the force of coronavirus, that we are all becoming better versed in the use of electronic media and are adapting and connecting in our rapidly changing world.

Some final words from Tony

“With three bands on the go (in normal times) plus my U3A stuff plus my riding, there’s a lot I don’t get round to!” But life is here for the taking and Tony is making the most of it.