An interview by Judy Vizzari in June 2020. Steve is one of our French tutors. 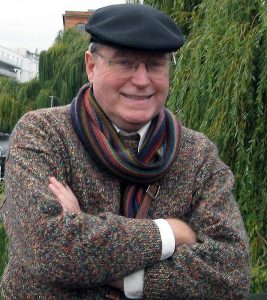 I ask Steve what he gets out of tutoring Nillumbik U3A Intermediate French each Monday afternoon, why he volunteers, and I am a little taken aback by his answer …

“THE POWER!” he booms over my scratch landline. I hesitate, but hear mirth at the end of our line and I realise he’s joking, “no, really“, he continues with what sounds like a boyish grin, “I enjoy sharing the culture, the language … and I love teaching“.

It seems Steve is something of a Francophile. As a student of the French language I can understand his passion, but I wonder where his interest originated. He tells me that he spent his early years in Cheltenham before his family headed bush and settled in Cobram by the beautiful Murray River in Victoria’s north – there’s not much that is French about either of those locations.

But it was there, at secondary school that Steve first encountered the French language although, he says, however much he might have enjoyed the subject his high school studies weren’t enough to give him a round knowledge of the language. Instead, he augmented his learning in an unusual way – French comics, bande dessinées, which he sourced from a specialist science fiction shop in Melbourne! He tells me that, in the 1960s, the French specialised in sophisticated comic books, amongst them Asterix (still one of his favourites). By the time Steve had completed secondary school and returned to Melbourne to study at Melbourne University, he had amassed quite a collection of French literature and bande dessinées.

At Melbourne University he studied Science, Physics and Psychology, subjects which required him to complete a unit of a foreign language and, of course, he chose French. Although those subjects were diverse and qualified him for a range of career choices in science or in social work his interest was in teaching and he eventually entered that profession as a secondary school teacher. It was, he says, a career he “loved“.

Steve has made two brief visits to France. The first journey with his two children occurred 25 years ago and the most recent, with his wife, was 12 years ago. He enjoyed both visits. He talks enthusiastically about the Apollo Hotel in Paris near the Gard du Nord where, during their first visit, he formed a strong relationship with the hotel manager (who was an avid collector of sewing machines!). Steve observed that the city changed a lot during those visits and noted particularly the influx of refugees and the increased presence of police in 2008.

Upon retirement Steve looked around for somewhere where he could build on his lingual skills and came across our U3A. He is now undertaking a Diploma Course in French at La Trobe University and has one more year to complete. He also joined Bill Naim’s U3A group where he remained a student for several years before the need for a new U3A French tutor arose and, with his good language skills and teaching experience how could he refuse? He joined the ranks of our voluntary tutors and has for three years now offered weekly classes which include, as well as structured learning (grammar, pronunciation and reading), a liberal sprinkling of French culture.

Amongst his course description are his goals which include “to understand spoken plain French“, “to be able to join into a (French language) conversation” and “to enjoy our French and our class get-togethers“. His teaching tools include “cartoons, French songs, French humour and satire as appropriate“.

So how could any language student not enjoy his classes? Well, his wife has joined our U3A and is loving Renato Deschamps’ Spanish classes … so why isn’t she learning French from Steve? Ask him.