An interview by Judy Vizzari in June 2020. Andrew is our long term tutor of Life Changing Events in History. 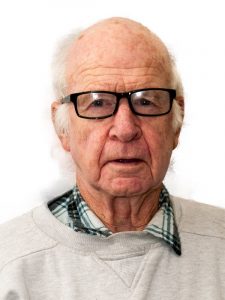 Andrew was born in Melbourne in 1936 and attended South Melbourne, Thornbury, Bell and Whittlesea State Schools and Coburg High School between 1949 and 1953. As an Education Department bonded student, he completed a BAppSc (physics/maths) and Dip Ed at Melbourne University between 1954 and 1957.

He served a bond at Swan Hill and Mackinnon High Schools but resigned to travel overseas, where he taught at Ecole des Roche, Bluche, sur Sierre, Valais (Canton), Suisse (Switzerland), between 1961 and April 1962. The school was immediately below Montana-Crans, which is a famous ski resort. During winter there he says “we skied half the day and had school lessons the other half for a six-day week. Agnes Moorehead’s son was a pupil at the school“.

On returning to London, Andrew connected with two Southern Rhodesians (now Zimbabweans), two South Africans, and a Canadian and they travelled around Europe for months in their yellow Bedford Van.

During this time, Andrew had many European adventures, here he describes just a few of them.

“On entering East Germany at Helmstadt, I was interrogated by police because I had grown a beard but was clean-shaven on my passport. I was forced to shave the beard (with cold water). In Berlin, we were camped against the Wall (near the date of the anniversary of its construction) and, during the night, heard machinegun firing. We entered East Berlin through Checkpoint Charlie and drove around on a Friday afternoon.”

“Later, in Marseilles, we also heard machinegun firing during the night. It was, by coincidence, the same time that there was an assassination attempt on De Gaulle in Paris. Paris, at that time, was militarily fortified as it was in the middle of the Algerian problems.”

Here are a few pictures from those adventures.

“Returning to Melbourne in November 1962 and now aged 26, I re-joined the Education Department and taught at Rosanna High (now non-existent) until 1963 when I resigned and commenced employment with IBM in Systems Engineering . While there, I taught the founding members of Melbourne University IT Faculty how to program, in Fortran, the 7044 that it had purchased for ₤750,000 and which became obsolete six months later when IBM released the first silicon chip 360 series.

“I married on 9 January 1965 then resigned from IBM two months later to re-join the Education Department as a teacher at Watsonia High (now non-existent).

“After that I have taught at Blackburn, Reservoir, Greenwood (now Bundoora), Templestowe, Sealake and, finally, at Eltham High, where I was Deputy Principal from 1981 to 1993.”

Andrew joined Nillumbik U3A when the Eltham campus started but did not attend any classes, instead he started his own class which has continued since then. He says, “it began as a science class then morphed into its present form of a combination of science and history. It ran in the Arthur Boyd room and was then transferred to Old Eltham Courthouse. Guy Palmer was in my first class.” Andrew’s classes have proved very popular – his most recent course is entitled Life Changing Events in History.

During the pandemic, he has reached a broad readership by providing links to some of his presentations in our weekly Gibber Gabber newsletter – perhaps these will encourage an even greater enrolment into his classes when they restart.

Another of Andrew’s interests is poetry and below are two poems which he wrote on returning to Australia after his European adventure. I found them gripping accounts of his travels.

Three score years, and more, have nocked,
And from the bow of time have sped,
Into the stygian depths of cold eternity,
Yet that voluptuous and brittle quarter of Paris,
With its brazen, polyglot spawn,
Is a vivid canvas, the mind, upon which,
with sympathetic brush and long nostalgia strokes,
Resurrects the people that populated the night.

Our curiosity unbridled, and naively inhumane,
(Could we claim our youth as legitimate excuse?)
When, the face of human misery we viewed as entertainment,
As looking for diversion we walked the garish street.

Remember how we laughed Jack?
As early in the evening, the first time we saw him,
That strange man,
Fondling and patting the nondescript car,
As in conversation he held it,
Gesticulating wildly,
While thrice and again, he around it rolled.
Then later in the evening we saw him once again,
Even more besotted with bacchanalian juice.
With whom did he converse,
as he lunged along the footpath,
Dodging non-existent objects?
Who joined him in his laughter,
Or listened to his words,
When he boasted his behaviour,
in elaborate pantomime.
What stirred in his addled brain,
When he shook the sleeping woman,
Who, in her mound of filthy rags,
Lay in a darkened doorway?
What act did it symbolise,
When, with a guttural laugh,
Into her trembling hands,
he pressed a single peanut,
While she lay there drunk and stuporous,
Her mind still clogged with sleep?
Did her spirit briefly flicker bright,
Fanned gently by the faintest hope,
Which like a breeze subliminal,
Had urged the embers into life,
From cinders of her aspirations,
But unsustained, quickly faded,
As she, pathetic noisome bundle,
Dropped back into her torpid state,
With no respite for her tortured soul,
As she slipped into her troubled dreams.

And your soul Jack, did it blanch?
As certainly did mine,
When suddenly we came upon,
Those lorettes of the working man,
As smilingly their trade they plied,
While standing in the muted light,
That seeped around the ragged blinds,
And melded with their forlorn efforts,
Which caked upon their bloodless faces,
Colours thick, and pencil lines,
Concealing what the merciless glare,
Of daylight, in its forthright way,
Expose them would,
Unkindly to,
Men’s criticising eyes?

And the one that stood amongst them,
Who did my heart imbue,
With an enervating pathos,
Was she really what she seemed to me:
A tragic waif, a mourning sylph,
Who captured from God’s other realm,
Was now compelled to satisfy,
The carnal appetites of men?

Or was she just another whore,
Whose untrue image in my mind,
Had filtered through a lens of hope,
And less substantial was in fact,
Than shadows in the twilight trapped,
While I in youthful innocence,
Her shallow wiles beguiled?

[The ‘Jack’ referred to in the poem above migrated from Zimbabwe to Brisbane in 1980, together with partner Audrey and a permitted total of $800.]

The viscous heat of the molten afternoon sun,
Invades the deepest shadows of the shingled-roofed tiers,
Extruding perspiration,
Which, reluctant to escape into the languid air,
Collects, in creases of the skin,
And upon scalps,
Coalesces,
Then dribbles down shallow vertebral columns,
Through cleavages,
And from armpits,
Moistening chemises,
Or staining shirts with triangular patches.

In the open terraces the radiant force of the sun,
Parches the skin of exposed limbs,
Initiating subcutaneous eruptions,
And evacuation of body oils,
Presaging afflictions of the aged.
It bleaches eyebrows,
And glances from the frames of sunglasses,
Speckling with flashes the multifarious colours of the crowd,
That has come to savour the bloodletting,
And to take vicarious pleasure in the deaths
Of tortured and frenzied bulls.

Into the arena of meticulous death,
Whose dark sands thirst for innocent blood,
The matadors strut, with arrogant pride,
To the blurting applause of brass and brash strings,
and the noisy, fickle, acclaim of the crowd.
A garish parade.
And an overture to the torture,
Inflicted upon the unfortunate bulls.

But what emotions stir the crowd,
that circle of jackals,
As the magnificent fighting bull,
Bred for the crowd’s amusement,
That sleek-sided black aggressive flesh,
Hung with horns,
Enters the arena.
Then pauses, warily sampling the air.
While the thirsty dust,
waiting to drink his blood,
Curls in anticipation about his polished black hooves,
Then rises to mingle with the hot air that scalds his lungs.
As his flanks heave, he snorts in angry confusion,
Tosses his gleaming horns, and bubbles at the nostrils.

Where is the valour?
What is admirable about the vicious banderilleros?
That like dogs of a ravening pack,
Dart forward to implant their cruel barbs,
Into the neck of the bull,
Who rages impotently,
as they flee before his charge, in mockery,
According him the briefest victory,
Until,
The ignoble picador with burnished phallic lance,
Armoured legs,
Bright silks,
And a comical hat,
Astride his mutilated and plodding steed,
that is grotesquely padded against prodding horns,
Blinkered,
And with sense of smell nullified,
Yet terrified still,
Has its blundering efforts to escape neutralised,
By the beast upon its back.
Who, lascivious,
upon the withers of the bull,
With gouging weapon,
Makes indecent assault,
To destroy the bull’s tossing muscles.

The flashy matador,
With ego preened and body groomed,
Incites the crippled bull,
Flutters his tantalising cape,
Goading the stricken animal,
Into exhausting futile charges,
Confusing and mesmerising Taurus,
To the acclaim of the crowd,
Before,
With cocky mincing steps,
He executes the Faena,
That little dance of death,
Until,
With so-called masterful display,
He callously extinguishes,
With relish and barbaric flourish,
A spark of life,
Gestated through aeons past,
And which links together all sentient matter,
That man wantonly destroys,
But is unable to create,

Deprived of life the mound of flesh,
A black hulk of aimless protoplasm,
Froths blood that dribbles to the sand,
Attracting flies,
That adhere and suck,
As ignominiously,
With embarrassed haste,
From the arena it is dragged,
For the market next day,
Leaving the matador the badge of merit,
An ear,
Or two,
And if the crowd is satiate,
Maybe a hoof.