An interview by Judy Vizzari in March 2019. 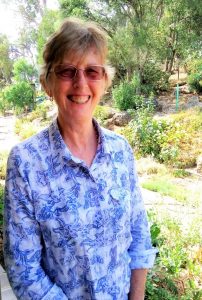 Our U3A offers its members amazing opportunities to access diverse learning which, through work and family constraints, was previously unavailable to them. Now we take on new languages, find out how to decipher cryptic crosswords and even confront quantum physics – we’re offered a fantastic range of classes. Why are we so lucky? I look to our members for answers and today maybe Pam Jenkins will provide some.

It’s a hot, dry morning and Pam and I have already wandered through her verdant garden on her acreage in the rolling hills between Eltham and Diamond Creek. I’ve marvelled at her garden beds which produce a larder-load of summer fruits and vegetables, we’ve wandered under a pergola laden with amazing white grapes and skirted fruit trees decked with nectarines hanging like Christmas decorations from their leafy branches.

We’ve greeted Pam's chickens and admired a neighbour’s sheep and llama and, as lots of us do, we’ve bemoaned the hoard of predators – kangaroos, possums, rabbits, rodents and birds – who are determined to share this garden’s bounty. But then a 'share', as described in my Oxford dictionary, is "a part contributed …. to an enterprise". Here, it is Pam contributing to her visitors' enterprise … their survival.

As the morning temperature rises, we repair to a shady verandah to sip black tea and lemon while she tells me her story.

Pam is a Taswegian by birth – her youth was spent in the north of Tasmania which, she says, is "a beautiful place". But, by her 18th birthday, she was ready to spread her wings – to experience life beyond the confines of a small community – so she decided to study nursing in New South Wales. Several moves between Tasmania and the mainland occurred before she emerged as a registered nurse and midwife.

Then her 'wings' took her much further – to the United Kingdom to complete further training, to qualify as a State Certified Midwife and to obtain a Certificate in Neonatal Paediatrics. During this time, Pam worked in a variety of occupations which included Tea Lady, "the best occupation in the world", and Typist Receptionist, "a fun job". I see that a thread exists in Pam's interests – a scientific thread weighted by medicine and people.

It was in London that Pam met Dave, whom she married and with whom she returned to Melbourne to settle in Diamond Creek and to raise a family.

Pam is now retired but definitely not retiring – between family commitments, running, gym visits (to maintain strength for the skiing season), gardening and U3A membership, she continues to enhance that original thread of interest – her love of science and people.

Pam has explored a variety of topics during her membership. She first enrolled into Guy Palmer's 'The Weirdness of Light and Matter', which was the study of relativity and quantum mechanics – "fantastic", she says. Then she turned to music – 'Music Tutti' where, she says, she particularly enjoyed learning about the lives, motivations and methods of early composers and the eras in which they lived. 'Events that Changed the Course of History' and 'Shakespeare Rocks' followed.

Pam tells me that she’s particularly interested in the eras from which each topic is drawn and how they relate to modern times – how our daily news sources often reveal parallels with past actions. She values the time and effort that her tutors devote to their subjects and appreciates the opportunity to further her knowledge.

Pam sees her membership of U3A as a 'give and take'

Last year, Pam decided that it was time she contributed to the U3A. Rather than take a course, she decided to offer one-off experiences to our members so she took a group by bus to the Australian Synchrotron, "a world-class national research facility that uses accelerator technology to produce a powerful source of light, X rays and infrared radiation a million times brighter than the sun". Fourteen U3A members enjoyed the visit. This year Pam is keen to offer more outings, particularly ones which focus on our local history, so watch out for news of her coming events.

Even more to give

Have you heard about the planter boxes in Chute Street, Diamond Creek? Pam joined as an occasional helper when they were established around four years ago and now she finds herself acting as the ‘chief box planner’, coordinating a group of helpers and liaising with the Diamond Creek Primary School. The beds grow a variety of edible plants which are free for passers-by to collect and are maintained by the organising group and, in part, by students from a local primary school. Pam says that she is often amazed by the "enthusiastic and innovative" gardening methods of some of the children and admires their results.

The ownership and pride that the Diamond Creek community, particularly the children, take in the project justify its existence. Her involvement is an example of her wish to give as well as to receive, her generosity of spirit is admirable.

"No one can whistle a symphony. It takes an orchestra to play it." (H. E. Luccock)

So I return to my opening thought – how does this voluntary organisation, Nillumbik U3A, nurture and extend its members’ interests and how do they contribute to its existence? Pam's story evidences her choice to share her knowledge and to build on the wealth of learning available through our tireless tutors and resourceful administration.

I’m well on the way to appreciating that the strength of this organisation lies in the involvement of each of its members.