The use of Zoom in our classes

Around 18 of our classes are continuing through the coronavirus pandemic by holding classes using the Zoom videoconferencing software.

We have established a central support team headed by Jan Taylor. Whether you are a tutor or a class participant, feel free to contact Jan by either email or phone (0421 202 046).

The Zoom phenomenon (by Chris Livingstone)

Chris Livingstone is involved in some of our Zoom classes. He also has a professional background in IT. Combining these two interests, he has been researching the history of Zoom, the end product of his research being the article below.

By now most people will have heard of Zoom. Since we’ve been forced into lockdown, people have been keen to work out new ways to keep in touch. My phone is certainly getting a flogging; just last weekend I had a three-hour conversation with a friend I hadn’t seen for more than a year! So, there are some good things coming out of this pandemic. But we do miss sitting down with friends over coffee and chewing the fat. You can, of course, use your phone or an app like WhatsApp to bring in a couple of other people but wouldn’t it be nice to keep in touch with everyone in your U3A group? Of course it wouldn’t be the same but you could still have a discussion somehow, couldn’t you?

Along comes Zoom. Out of the blue comes something that we can use on our computer to hold meetings over the Internet. Suddenly it seems everyone is using Zoom.

It’s not difficult to see why: it’s easy to set up meetings, easy for people to join, and you can use it for free! What’s not to like?!

At the start of this pandemic, very few people had heard of Zoom. But it’s not new – it’s been around since 2012 mainly in the business world. Where did it come from? 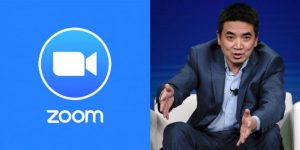 Zoom’s founder and current CEO is Eric Yuan. Born in China, he gained his bachelor’s degree in applied mathematics and his master’s in computer science before taking up a job in Japan for four years. Inspired by Bill Gates, he decided to head to Silicon Valley. It took seven failed attempts before he finally got a visa; he finally made it to the United States in 1997 with only the rudiments of English. He was always interested in remote communication. (When he was studying, his girlfriend was living 12 hours away and he could only see her in person twice a year. By the way, he later married that girl and is still married to her.) It was hardly surprising that, when he arrived in the US, Eric joined a company called WebEx, which was one of very few companies providing software for remote meetings. He started off writing code but over the next few years rose to a senior position in the company.

Eric was always interested in getting customer feedback and he was disappointed that many people did not have a good experience with WebEx. (I used it myself back around the turn of the millennium but never had any complaints and it was useful when I was trying to organise a conference with a couple of people interstate.) Cisco took over the company in 2007 and Yuan continued to improve the software. In 2011, he submitted a proposal for a video conferencing application but when this was knocked back, he decided to set up on his own. 40 software engineers followed him to his new company and in 2012 they released the first version of Zoom. Eric Yuan was, and still is, apparently focused on the customer, so much so that even as CEO he used to connect directly to Zoom users to get feedback about his product.

Eric had several requirements uppermost for Zoom. Up to that time, remote conferencing software concentrated on voice connection – that has to be top priority. Think what happens when you’re on the phone in an area with bad reception: the sound breaks up and it becomes almost impossible to follow the conversation – you quickly give up. But from his experience with users, he believed that it was also important that meeting participants should be able to see their fellow participants and look them in the face. It didn’t have to be a top-quality image just so long as you could see them. It was also important that there was no discernible time lag – isn’t it off putting when the sound is out of sync with the speaker? This meant the software had to be able to run on poor Internet connections. He also wanted the software to be inexpensive and, to that end, he provided a free option.

The company quickly attracted a following and grew steadily until it reached a market value of $1 billion whereupon it floated on the stock exchange (labelled a ‘unicorn’ in IPO terms). There are now many products for remote meetings and presentations, webinars and the like, but Zoom has maintained steady growth, up to 10 million users each day at the start of this year. Now, suddenly, it has been noticed by the general public and within little more than a month has grown to 200 million users each day. 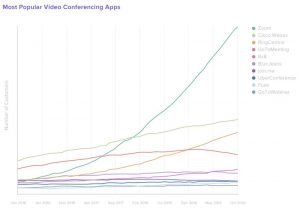 So what makes Zoom so attractive? Why has the number of users jumped twentyfold in a little more than a month?

It’s not hard to see. Eric Yuan’s attention to the customer experience shows. It is very easy to set up a Zoom meeting, very easy to run a meeting, and even easier to join a meeting. You can use it with a computer or a tablet or even with just your phone. Above all, it works well.

This sudden surge of interest brought Zoom into the spotlight and suddenly it was attracting much more scrutiny than it had in the past. In particular, notice was drawn to some security flaws which led the CEO, still Eric Yuan, to make a public apology to his customers. Security is always of major concern but, in my opinion, some of the media and some commentators got rather carried away with this since Zoom had suddenly become so popular.

It used to be said that software without bugs hasn’t been written yet in the same can be said now about security flaws. All software has bugs, all software has security flaws – that’s just the nature of computer software. Type in “security flaws” plus the name of a major computer application into your search engine and have a look what comes up. Just a couple of months ago, security flaws were found in Google Chrome, flaws which Google labelled highly significant. Many of you are probably using Windows 10 on your computer – not so long ago a security issue was found which was so significant that the US government became concerned.

So when it is reported that a piece of software has security flaws, there’s no reason to panic – companies quickly jump on these flaws to correct them and send out updates. (That’s why it’s important to update your computer software including the operating system, such as Windows 10, when prompted.) By far the biggest concern with Zoom was the fact that uninvited guests could gatecrash your meeting. It wasn’t really a problem until Zoom suddenly came into public prominence. Each Zoom meeting has a unique ID, a six- or seven-digit number and this ID is used to join the meeting. Bored teenagers could just type in a random number and every so often they would hit the jackpot; they were in a meeting with a bunch of strangers and they could then wreak havoc so to speak, putting up rude messages, showing porn videos, and other undesirable material – this is what is called ‘zoom-bombing’.

But this is easily preventable – just use a password. This is set by the host of the Zoom meeting but the password is optional and in the past it was set to no password by default – the host actually have to tick a box to use a password. One of the improvements in the latest version of Zoom is to have that password box ticked as standard. The host can also set up the meeting so that people cannot just join and go straight into a meeting – they need to be admitted by the host. And there are further levels of security if you want to use them. Given the sudden surge of popularity, Zoom engineers are now working flat out to make sure that the product is as secure as possible. Of course, it’s still up to users to take reasonable precautions – one school overseas put full login details including passwords for their scheduled Zoom meetings on their public website!

Some of you may have seen that the British House of Commons will sit remotely after Easter. At any one time, 120 MPs will be able to ask questions from remote locations while another 50 will actually sit in parliament under strict social distancing rules. The software they will be using? Zoom!

So are you still wondering whether to join a Zoom meeting? Or even organise one yourself? Why not give it a go? I heard someone say that it’s not like meeting in person – of course it isn’t. But it’s the next best thing while we are in captivity. And who knows what might come out of this? When we’re all back sitting down next to each other, slapping each other on the back, appreciating our newfound freedom, we may find that Zoom enables people who can’t make it to a meeting, maybe because of illness or transport, to still participate.