An interview by Judy Vizzari in February 2020.

“I went along to the Nillumbik U3A AGM with Mal Harrop – I wasn’t even a member at that stage. When they called for nominations, Mal said to me ‘you could be Vice President’ and he jumped up and nominated me … and I was elected!” 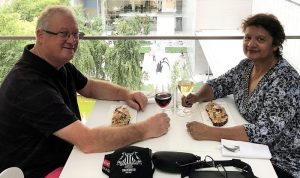 Stuart Winstanley laughs as he remembers how, in 2012, he made this impromptu entry into Nillumbik U3A’s history book and how, after only six months, the elected president unexpectedly moved to Ballarat so he, Stuart, was elevated to the role of President. It was an unexpected responsibility which he embraced and retained for three terms.

I’m sitting in Stuart and Cheryl Winstanley’s lounge room on a fine soft morning at the end of a hot Melbourne summer. Their house is one of the early builds in Eltham’s Woodridge Estate, an iconic 1970s subdivision in the rolling hills east of the township. Stuart tells me that, back in 1975 he and Cheryl discovered Eltham after living in several inner city suburbs. Eltham was for them, he said, “like paradise“. They bought land and built their home five years later in 1980.

That land is perched on the rim of a hill-high court which connects to parkland. In the 1970s it was bushland and today it still retains its ‘Eltham’ feel; natural, comfortable and at ease with the landscape. It seems, too, that many of the original inhabitants still visit – it’s apparently not unusual to see a red-haired wallaby, a wombat or an echidna passing through or flocks of birds overhead. Despite the threat of bushfires and limited escape routes, Cheryl and Stuart still love their home in its bushland setting.

Stuart tells me that he spent his youth in Woodend, then studied Chemistry and Applied Science at RMIT in Melbourne. But he has, for much of his life been a student – early studies blended with part-time work and later in life he returned to study to broaden his knowledge base. He worked in varied fields during his employment and, in his last position, managed projects in software development and installation in the information technology industry – work which, he says, “set him up” for his co-tutoring role along with Tony Lee, Rob Rankin, Gerard Wood and Len Vardy in Nillumbik U3A Information Technology sessions, a course which offers our members an opportunity to catch up on the rapidly changing world of IT.

“I like all jazz“, says Stuart with a smile when I ask him about his other interests.

I’ve heard that he is involved in our U3A Jazz Appreciation class but I don’t know to what extent, so it’s exciting for me to hear that he has always been a lover of music, particularly of jazz. Apparently most of Stuart’s musical collection has now been digitised and he estimates that he has close to 20,000 tracks! A glimpse of my dad and his pile of 48 and 78 LP classics (selections he played each evening before dinner) flashes before me as Stuart points towards a cluttered corner of his room which contains, he says, part of his musical collection. I wonder if he owns any of the tracks I’m familiar with.

We chat about the group, which is known for its knowledgeable tutors (John Crichton and, formerly, Mal Harrop) and its ingredients for success: members, informality (socialising at the end of each session is an important ritual) and entrepreneurial endeavours (organising performances, sponsoring students and involvement in major local events).

It seems that, while the Monday night classes use videos and discussion to prompt in-depth examinations of jazz musicians and their music, the group also enjoys connecting through their monthly Jazz on the Green sessions at the Eltham Bowling Club. I’m told that tickets for these evenings (Eventbrite: $15 for seniors) are sold out almost immediately that they are available on the web – who could resist great music in licensed premises at very reasonable prices? Profits from Jazz on the Green are channelled into supporting local schools’ music programs and local music initiatives. Stuart is proud of the success of this group and their initiatives.

“We encourage youth to get into improvised music – that was a vision that Mal Harrop had“, he says, but it seems to me that this group encourages all music lovers, young and old, to benefit from their activities.

It’s time to focus on the other part of this partnership and her background and achievements. She has twinkling eyes and a slight accent and I’m struck by her lively enthusiasm. She tells me that she is Anglo/Indian, was born in Calcutta, and that in 1970 the family decided to emigrate to Australia for a better life. Sadly, her father passed away aged 48 just before they were due to leave and her mother was left with a difficult decision – to undertake the journey with her two children, or to stay in Calcutta. She decided to emigrate. Cheryl says that they never looked back.

In 1971, Cheryl met Stuart through friends and they were married two years later. The insurance industry was Cheryl’s employer until the 1980s when, with two young children, she chose to focus on their upbringing, the management of her home and her involvement in her local community.

We talk about U3A

Cheryl is an active member of Nillumbik U3A and an enthusiastic participant in its Craft, Conversation and Afternoon Tea group which meets on Friday afternoons in Hurstbridge. She says that, although the group’s membership is currently only of women, men are also welcome to join. Why shouldn’t sewing, knitting, crocheting, quilting and embroidery skills be the assets of both sexes? I reflect that there are also local opportunities for women to take on woodwork skills too and that perhaps we can all benefit from stepping outside our stereotypic descriptions.

The Craft Group is friendly, Cheryl says, and its members enjoy dedicating their time each week to their favourite crafts, to group projects and to social interactions. They are particularly proud of the work that they have produced for charities including mittens for bushfire affected wildlife, knitting for the Austin Hospital gift shop and rugs for the elderly.

I’m struck by the ability of U3A groups to reach out into their communities – as Cheryl says, “U3A is not just about doing your classes and going home“.

The morning has flown and it’s time to go. We wander out past their wicking bed loaded with red tomatoes, basil and capsicums and I smell the eucalyptus of tall trees in this quiet setting. On the way home, I turn up the volume of my car stereo, listen to Ain’t Misbehavin by Billie Holiday, and reflect on the diversity of the folk who contribute to our community. I also wonder whether this track is on Stuart’s listening list.