An interview by Anne Kane in December 2015. 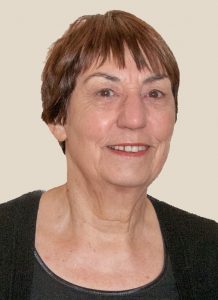 Val Harrop became an of-fice volunteer at Nillumbik U3A shortly after the Eltham office opened at the Old Eltham Court House. She insists that she is just one of the team which provides face to face contact with members and prospective members. Many members both old and new have had the benefit of her friendly and helpful assistance. Her enthusiasm for U3A is infectious.

When it comes to experience, Lancashire-born Val developed a social con-science and commitment from an early age as she moved around following her professional-soldier father to a variety of postings.

Val’s first overseas ‘posting’ was to Bielefeld in the British occupation zone of Germany at the age of 7, where she broke all the non-fraternisation rules and regulations, but who does a creative child play with? Even at this early age she recognised the difference between the well supplied NAAFI stores available to the occupying forces and the scant basics available to their German neighbours. Val still remembers her playmate’s mother breaking down when given a reel of sewing cotton.

When Major Hawkins was posted to Trieste, Italy, Val was sent to a boarding school at Klagenfurt in Austria. Here she had her first brush with Australia, a teacher—possibly a little home sick, who taught her international class to sing ‘Kookaburra sits in the old gum tree’, as a round.

The next move was to Famagusta in Cyprus where Val did some work in the British Administration Offices and as a lively teenager made friends with her Greek co-workers. A masquerade as a local saw her attend a wedding in a village off-limits to the British and so steps were taken! Val was returned to her home town Newton-Le-Willows to live with her aunt and complete her schooling.

With this completed an interesting opportunity arose to study Occupational Therapy in Liverpool. Val applied and was accepted with the career choice proving an instant fit in no small part because of her ability to listen to people from all walks of life and treat them with equal care and concern. Val began work in the O.T. Department of Bootle Hospital but at the same time was retained to teach administration at the Liverpool College of Occupational Therapy for half a day a week. Her communication and organisational skills were already very evident.

Meaningful work became a key part of Val’s life, but fortunately it was only part! In attending a fancy dress dance as Robin Hood she found herself spending most of the dance with the partner she met who used a dyed brown sheet, a length of rope, a balding pate and slight paunch to create a passable Friar Tuck. So Val met Mal and it was a case of engagement in weeks and marriage in months.

Forty-nine years on, the pair still find it hard to under-stand all the twists and turns of a very full life together, including the circumstance which took them round the world to Australia and saw them ultimately settle in Eltham in 1973. Val’s Australian highlights include raising two daughters Jacquie and Pippa and, more recently, providing grand parental support for two grand-daughters.

Following some creative home-based ventures Val became co-founder and owner of the highly successful Eltham Gallery where she remained as a Director for 17 years. At the same time she set up and maintained Mal’s company books. After retiring from the gallery, Val volunteered with Emergency Relief at Nillumbik Health for over five years, before finding a challenge closer to home. She became Mal’s carer and chauffeur following his diagnosis with Parkinson’s Disease.

We in Nillumbik U3A are the beneficiaries of Val’s zest for people and community. Thanks to a re-markable and generous member.