Last Monday, the Walking Group walked along the Yarra near Pound Bend. Brenda Hilson reports that, although it was a bit drizzly, it was still very enjoyable to be out in nature and good to see that the water is running high. 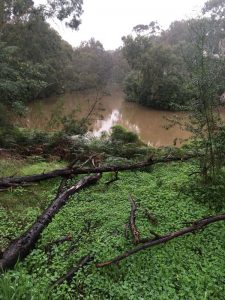 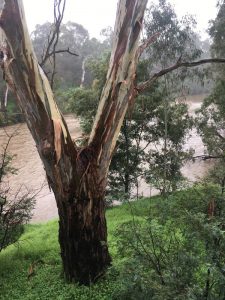 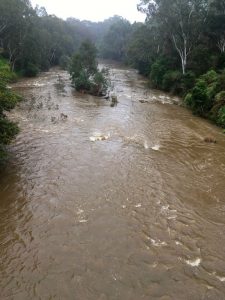 On 29th June, the Walking Group walked along Osborne Road in North Warrandyte. Brenda Hilson has sent in some gorgeous pictures together with the following message: "A beautiful sunny winter's day. Fabulous morning along the river. Thank you Mother Nature! And thank you too Rob for providing your leadership." 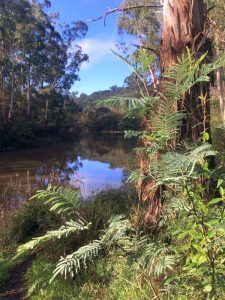 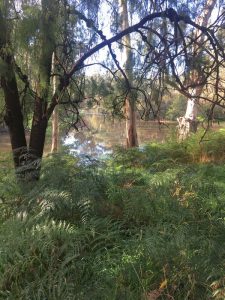 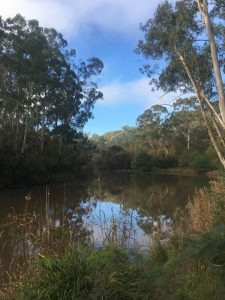 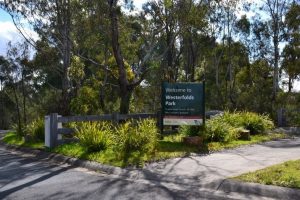 Thanks for Gillian Essex’s’s article last month about the Walking Group. My husband John and I have enjoyed many walks with this group and echo the comments made in the article, particularly in relation to the great work put in by Rob (and Graham) to run the group. Participating in these walks, however, requires a reasonable level of fitness as they are of 1.5-2 hours’ duration, often involving walking on narrow, and sometimes steep, paths.

As you might be aware, at the beginning of 2019, Pam Griffith started a Gentle Walking Group to cater for those who would love to walk but are unable to manage the distance and/or terrain of the established walking group. This group usually walks on flat-paved paths for around 1 hour. John and I often now walk with this group, which usually has between 10-15 participants. It’s a great idea to have the two groups so that people can choose which one best suits their needs/abilities. As with the original walking group, members of the Gentle Walking Group also meet for coffee and socialising after the walk, which is held on Monday mornings at 9.30am. We really appreciate Pam facilitating this group. 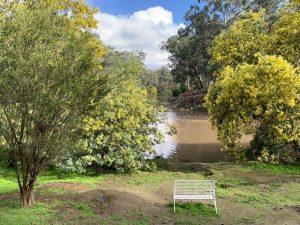 The walking group is one of Nillumbik U3A’s longest running groups and with good reason. We are blessed, in this region, with a proliferation of readily accessible walking tracks, affording excellent views and with many having an interesting history which few residents are aware of. But our leader Rob Gardiner is doing his best to change that, particularly in relation to the Aboriginal history of the area. Impressively, he is still managing to come up with new walks after many years on the job.

With the great outdoors as our classroom, we don’t have space restrictions so there has not, as yet, been a need to restrict numbers. There is no requirement to walk every week (though the opportunity is there even through term breaks). The term breaks afford us the opportunity to travel further afield – sometimes with an enjoyable lunch involved – as there is no need to get back for other classes. 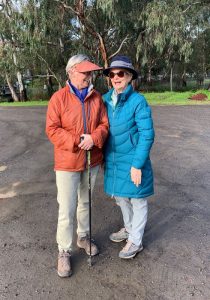 When Rob is off walking somewhere else in the world, other members of the group step up as leaders – in particular Graham Clark. I personally find it a rewarding activity exploring on an occasional basis to find a new walk and researching the history. However, it also serves to remind me of the time involved and the effort required to do this week after week and makes me appreciate Rob’s commitment to our group even more.

We are a social group – an important feature of the walk is the coffee stop afterwards. While we have favourite coffee shops, we also make new discoveries as well.

We even have enjoyable weekends away to Gardivalia, the Gippsland Garden Festival, thanks to the efforts and hospitality of Jan Holland.

With the frosty mornings we’ve had recently, it’s been necessary to rug up and sturdy shoes are always recommended. However, in spite of this, some of our members still manage to look stylish – a feat I personally find impressive – as evidenced by the photo of Ros Camera and Heather McGain, both regular walkers.

When the sun is shining, the river is flowing, the wattle is blooming (as shown in the photo above, which was taken at Tikalara Park on a recent walk), and the company is convivial, what’s not to love?