This profile was written by Debra Forbes in 2017 Term 3. 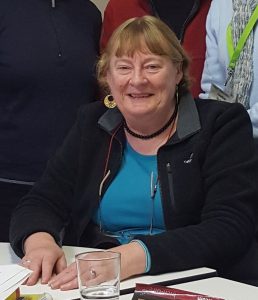 U3A has a number of language classes. Spanish, Italian, Japanese and Latin are available, but it is French with Lucille Sadler that I attend. The U3A classes for French range from complete novices like myself to advanced French speakers. Our tutors are Bill Naim, Steve Gilbert, Roger Barnard and Lucille Sadler, who is the focus of this article.

Lucille tutors two classes for us. One is Intermediate French. This class is designed to progress your grammar and understanding of French. We practice reading and speaking, we learn French songs & poems, and we listen to native French speakers to train the ears.

The second class is French Conversation. Each class member brings a story to the class which must be spoken in French only, preferably as in normal conversation. They then respond to questions from other class members, with some of the more difficult words being written down to prompt us to keep going.

I joined the beginner French class two years ago. At the time, I had to do an interview over the phone with Lucille before I could be accepted into class. So, the wonderful volunteers in the office phoned Lucille asking if she had room for another in her class. Lucille asked to speak to me, I suddenly was as nervous as I was as a bride on my (first) wedding day.

I stuttered out the only word I could remember “Bonjour Lucille” in my strong Australian accent.

Lucille immediately said “You’re in.” Wow, thinks I, that was easy, I must be a natural.

My first lesson quickly showed me that I was not a natural and that I was in deep water.

Two years later, I am still the class dunce, and I am sure I push Lucille’s patience to the limit. But it doesn’t matter. We just have fun, there is so much laughter amongst the grammar, stories, poems, songs and friendship. 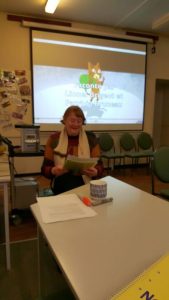 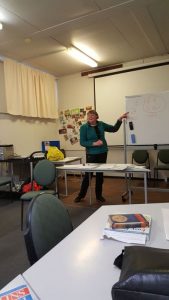 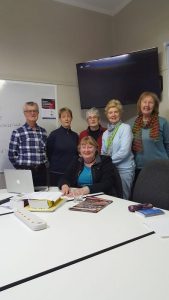 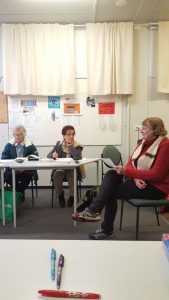 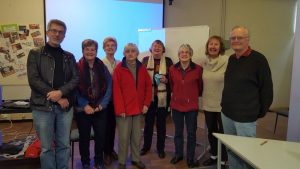 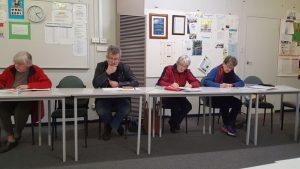 Homework is optional, you can do it and advance faster or not. Lucille doesn’t pin anyone to the wall if homework is not completed. However, one time when class member Bill was asked for his homework, quick as a flash, Bill came back “Mon chien a mangé mes devoirs!” (tr. my dog ate my homework). That took the class into peals of laughter for a full two minutes. We wonder if Bill used this excuse when a teenager at school – seeing the joy on his face, we guessed it to probably be true.

Maria, whose native tongue is Spanish, often entertains us with translating first to Spanish then to English or French before uttering the translation or answers. We can see the cogs rotating as she pushes herself to get it right. We were soon to learn Maria had another magnificent talent. She is possibly the shortest and most petite class member. When the class was a bit rowdy and speaking far too much English, Lucille gave Maria the nod to bring order. Maria delivered the most ear piercing whistle. Well, that brought us to heel, as much from astonishment that such a whistle could be produce by such a petite femme (tr. small woman) woman. “On était fasciné par ce talent inattendu” (tr. we were fascinated in this unexpected talent). Margaret, wasn’t brought to heel, however – without losing a beat, she asked Maria how she could produce such a whistle while the rest of us were still trying to clear the ringing in our ears.

Lesley commented quietly in class after a particularly entertaining exercise in coping with the prepositions of de, des, du and the à, à la aux – I just don’t understand their uses. Lucille latched onto that comment and promised more ‘exposure’ to the prepositions saying, “don’t worry – we will practice them when I feel strong enough again!”

Last week at French conversation, when a class member used their de’s, du’s and la’s in the right place, Lucille felt she was finally winning. “You got it, you got it.“, she said, hands in the air pumping. So terrific to see the delight on her face, but, oh dear, we obviously have been rather challenging.

A recent homework was “Quel est le numéro de l’agent secret James Bond” (tr. what is the number of the secret agent James Bond). Chris thought that the question was how many James Bonds had there been, and spent hours researching all the James Bonds through history and even reciting all those actors back to class. However, the answer was 007, and poor Chris was mortified that it was that simple after all the work she had put into her version of the answer. “Si amusant” (tr. so funny).

Lucille goes to a lot of trouble to present material that is both amusing and interesting. One such time was after our own Barnaby Joyce had threatened to exterminate Johnny Depp’s dogs, Pistol and Boo, when they entered Australia illegally. A send-up of Barnaby was produced in French and, would you believe, the so-typical candidness of Barnaby words of “bugger off“, translates as “foutre le camp“. Who would have known that?

So, how did Lucille come to be at U3A? It is a long story and an amazing journey, too much to illustrate here and do it justice, but perhaps I can give you a taste.

Lucille worked in the public service as an Immigration Officer for 36 years. She had seven overseas posting throughout that time, something that is no longer possible to do due to changing rules. These postings were, in chronological order: Portugal, Chile, Papua New Guinea, Egypt, Philippines, Malaysia and Timor. She also worked in Australia in the Thursday Island, Melbourne, Darwin and Hobart offices.

Lucille’s love of scuba diving, with over 500 dives to her credit currently, helped with some of her posting decisions. She learned to dive in the Red Sea and found that it was what she wanted to pursue as her leisure time passion. “The best dives are those called LiveAboards where you get to spend a week or more at sea diving. One such dive was at the Cocos Islands off Costa Rica where I saw the hammerhead migration – probably over 1,000 sharks passing by as they moved from Cocos down to the Galapagos off Ecuador. Worth the ear infection which – mercifully – came after the migration dive so I didn’t care that the rest of the trip had to be spent reading!” 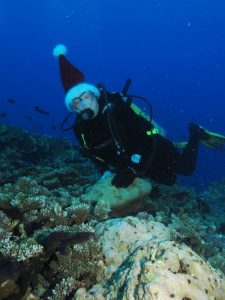 This photo was taken in PNG along the northern coastline. It was a week-long live-aboard dive trip which started from Rabaul and finished in Kimbe.

Beautiful diving – corals still in great condition – no bleaching at that time and the area is a marine park so there are lots of sharks. It may sound strange to non-divers but sharks are what all divers hope to see.

Lucille is an accomplished bridge player, having taken the challenge to really study the game. Unfortunately, working overseas and moving around so much, meant that there were periods of many years when she was unable to indulge this pastime. Since retiring in Eltham, she has started to play bridge again at a local club.

I have spent many hours with Lucille recording her experiences and, to do them justice, they require more than a few lines in this bulletin. With your forbearance, I will share some of those experiences with you in forthcoming bulletins in articles of manageable size. I hope you will join us on that journey. Some stories just need to be told.

A big thank you to Lucille for volunteering to be a tutor of French with Nillumbik U3A, Your classes are amazing and worth every moment spent there, even doing our homework!