An interview by Judy Vizzari in November 2019. Lyn and Tom are co-tutors of our Tuning into Opera class.. 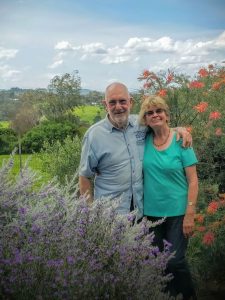 How often do we pass through familiar places without taking time to really look? I know I do, often … for instance, just north of Eltham are the rolling hills of Kangaroo Ground and many times I've travelled through them en route to St Andrews or Yarra Glen without giving more than a cursory glance.

But recently I visited U3A group leaders, Lyn and Tom Richards, who live there and, driving away from the main road, I slowed down to observe the vista. I saw large properties, vineyards, olive groves, fruiting orchards and livestock. I saw that Kangaroo Ground is a lush and rural place infused with a slightly secretive, but particularly Australian, beauty.

But kangaroos seemed to be absent – after all, it is Kangaroo Ground, so where were they? I was to discover that there are, indeed, kangaroos in Kangaroo Ground and that they are fascinating neighbours. [Editor's note: if you drive around Kangaroo Ground at night, you will see lots of kangaroos.] That day I learned a lot – my visit with Lyn and Tom was as entertaining and informative for me as their Nillumbik U3A's Tuning into Opera group sessions must be for their participants.

I find the entrance to Lyn and Tom's 20 acre property branching off an out-of-the-way court. It travels through a beautifully landscaped spread of fruiting trees and lawn (and a cubby house for the grandchildren) then approaches their low slung, open plan house. I'm on the lookout for an observatory too – I've been told there's one here, but it's not evident.

Tom and Lyn welcome me. Now we're sitting in their living area before a spread of delicious freshly baked home grown strawberry muffins and coffee. My outside view is of the southern, front side of the house, where a patio supports a wealth of decorative and culinary flowering plants. Floor to ceiling windows offer a lovely aspect of this protected garden.

Behind me, facing north, is a glass wall which looks out onto Lyn's beautiful display of colourful cymbidium and dendrobium orchids and her collection of grevilleas – they're all in bloom and are backed by bushes of grey green foliage. These orchids and grevilleas are aligned to the home's southern entrance and, on entry, visitors are provided with a stunning display of flowers.

Further to the right of the grevilleas is a row of fruiting trees and, beyond them, is a broad expanse of grass which extends out to a curve then plunges downward into out-of-view bushland. This view is dominated by uninterrupted sky.

An opera of their own

It's on this grassy platform, I'm told, that a story is in constant play. Kangaroos come to feed and also to drink from strategically placed water containers – they're appreciative regulars, especially in summer when food and water is scarce. Lyn says that there are around 100 roos on their property but that they cause little damage as their feet are much kinder on the terrain than those of hooved animals; rather, they 'mow' the grass and their droppings provide rich manure.

The addition of flowering and fruiting trees has encouraged visits from other native species too – particularly birds. Tom says that, when they bought this bare pastoral land, just ten years before, the only avian visitors were magpies and currawongs but now there's a bird count sheet on the fridge which includes over 50 species!

It strikes me that, with this beautiful outlook, it's no wonder Lyn and Tom have 'blue chair' moments scheduled into their days, moments when they retreat to their huge blue leather chairs to enjoy a 'natural' opera unfold – a plot which focusses on survival, a story with villains, heroes and even a heroine ('Snowdrop' the white kangaroo), a show in which, it seems to me, they are participants as much as audience.

The U3A Tuning into Opera course has run for a number of years and currently has a waiting list. I know several participants who speak of it enthusiastically but Lyn, a sociologist, and Tom, who studied mathematics and logic before branching out into computer sciences and advanced programming, tell me that when they started this course they knew "absolutely nothing about music". They add, though, that they both "loved opera". I ask them how they decided to start the group.

"One fine day", says Lyn, with a twinkle in her eye, "six of us were talking outside the Courthouse after a session with Lyn Hatherley on Homer's Odyssey. We discovered that we had all seen the same opera the night before." It seems that opinions were mixed on the production and their lively discussion prompted an idea – Lyn said that it would be good to start a U3A opera appreciation group. With this 'lightbulb' moment, she had unintentionally volunteered herself and Tom into leading a new course – that's the serendipity of U3A course beginnings!

Lyn and Tom's first task was to "nut something out", namely a framework and a process. They would design sessions that combined sheer shared enjoyment of operas with investigations of operas' historical development, its stories, music and composers, its costuming and set-making. They would compare differing productions of well-known operas, visit theatres to watch performances and set up their own communication channels.

Three years later, the group remains successful. Its members range from newcomers to opera to dyed-in-the-wool followers and, as tastes vary, there's enormous scope for lively discussion, a hallmark of its weekly meetings. Studies are created around current productions or live in HD films showing around Melbourne so that group members can take advantage of the opportunity to "study before you see", apparently a valuable tool in operatic appreciation. Over the years, the course has built a formidable archive of materials on the operas and themes covered, first in the Tuning into Opera website (2016-18) and, from this year, in a new blog. These materials are all free to access.  If you would like some advice on how a website can add value to your U3A class, contact Lyn by email (lynprettyhill@gmail.com).

A traditional end-of-term event for participants is a full opera indulgence" session at the house in Kangaroo Ground. On those days, group members watch a complete opera on Lyn and Tom's living room screen and share their food and company in this beautiful location, celebrating the richness of music, learning and socialising with a broad range of friends.

A full box of tricks

So I've witnessed the enthusiasm that this couple have for opera and also for our U3A organisation, which they describe as "a supportive network", but what else occupies their time?

Much, it seems. Lyn and Tom met through their work at La Trobe University. She was an Associate Professor in Sociology and he was originally a logician who later moved into information technology and became Associate Professor of Computer Science. Lyn specialised in qualitative research and it was through that research that the two linked their combined skills to collaborate on pioneering computer software for managing qualitative data. Lyn's books and Tom's program still sell well and the pair became world leaders in the field of collecting and utilising qualitative data. They have now stepped back from their work, but not entirely – Lyn is currently working on a fourth edition of her latest book.

Until recently, Lyn was the convenor and newsletter editor of Montmorency Asylum Seekers Support Group (MASSG), an active organisation which, as displayed on the group's website, aims "to support people who have sought asylum in Australia and to defend and promote their right to do so. We do this by assisting individuals in our community, by contributing to organisations supporting asylum seekers (e.g. ASRC), by working to raise awareness and compassion within our community, and by campaigning for change in government policies and practices."

MASSG was started 16 years ago, has grown with the need, and now has members across North East Melbourne. The group has been successful in providing support through various fundraising events for many needy people within our community. Lyn shows me photos recently taken in her sunroom, a sunroom filled to overflowing with donations of food and household and personal items donated during MASSG's Long Winter Food Drive for the Asylum Seeker Resource Centre (ASRC). She says that people are often more ready to donate items than money. The group is obviously very grateful to donors and to the libraries, churches and local food places that helped by collecting donations. She also acknowledges the moving company, Man With a Van, for their support in providing transport.

Recently Lyn "took leave" from her MASSG roles to work on her book … but she's certainly not leaving the organisation altogether.

Tom tells me that astronomy has been a passion since childhood, so it seems that the story of the observatory was accurate after all. I wonder where it is. With a little prompting by Lyn, he offers to show me. I'm excited at the thought of it. I picture a staircase leading up to a high room and the romance of a telescope turned upwards to focus on the sky above. But what I see only bears a passing resemblance to my imaginings. Up two or three steps into a tiny tight space with a closed, domed ceiling. Just enough room for us to move around an enormous piece of equipment, a fully computerised contraption which is, yes, angled upwards. Tom reels off names and descriptions which are beyond my ken, but I understand that he programs his equipment to track the night skies and in the morning reviews its travels. It's obvious that this is a special place – too special to refer to as a 'toy', a word which I had the effrontery to use before immediately realising it was nothing of the sort!

Tom contributes to various international research groups and journals. In short, he's in touch with astronomers worldwide and a contributor to the collection of valuable astronomical data.

It's almost time to leave but, before I go, Lyn takes me on a guided tour of her extensive vegetable and rose gardens. We stop off at her hothouse, home to many orchids, and wander over the kangaroos' meadow. It occurs to me that the upkeep of such a large property must be demanding and she answers my unspoken words – as a result of her association with MASSG, she has met many asylum seekers who need and want work, as well as needing work experience and references. This vegetable garden has benefited from their energy and enthusiasm.

Lyn and Tom's world seems to be a tapestry of threads. Their lives are rich in colour and vibrant and I feel privileged to have glimpsed just a slice of their numerous pursuits. I leave with a handful of limes, a huge bag of horse manure and an impression of life well lived.