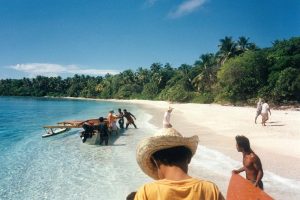 The sea was a deep aqua blue, more beautiful than a dark precious stone shimmering under the clear blue sky. I will always remember that colour of the sea on that boat trip from Abyiang to a nearby tropical island in the sun.

I remember my wife sitting quietly in the bow, having recovered from an earlier ordeal when she awoke as if from a sudden nightmare to a raging shivering fever. We were then staying in a thatched hut on Abyiang, the guests of volunteer teachers from Australia and Canada. The schoolchildren, upon hearing of her fever, brought us coconuts, telling us the juice would soon restore her to good health. True to their word my wife was soon up and about as if the fever was no more than a bad dream, much to our mutual relief. We had arrived the day before by boat from Tarawa, the most populated Island in Kiribati, as our intended plane trip was cancelled due to a breakdown. We negotiated with locals who took us to Abyiang by boat, finally trekking across the coral reef as our boatman carried our provisions.

We arrived both hot and exhausted.

Soon the weekend had beckoned and it had been decided to visit a nearby deserted island. The first glimpse of the island from our boat was of a pristine beach of endless white sand, crystal clear sparkling waters and a thick, almost jungle-like, foliage hugging the foreshore.

After our landing we hacked out an open space in the thick foliage to make up a rough camp space but were interrupted by the arrival of a local family. Oh dear! The island was not deserted after all. Worse still, discussions ensued as to whether we had suitably introduced ourselves to the spirit of the island by traversing it from one end to another.

The family finally departed amicably and we were left to explore the coral reef and its wondrous underwater sites. To our surprise the family returned again but this time with a number of large brightly coloured crayfish, which they had caught for us specially to be consumed for lunch. Furthermore, after learning some of us were to soon return to Australia, they performed a special ceremonial dance of farewell in the sand. A most elaborate and complicated dance performed in a wonderful spirit of friendship, extended so generously to strangers, ones to whom they could not converse nor were ever likely to see again.

The dance reminded me of the ceremonies that must have been performed to farewell canoes long ago as they set out to populate the many islands that make up what is now the kingdom of Kiribati.

Their history is recorded in the many dances and songs, words to exquisite harmonies lasting for several hours, never written down but handed down orally from one generation to another.

Oh, island in the sun.