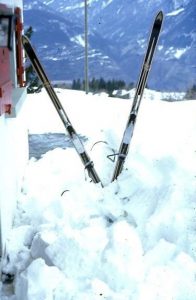 Grafted to a pause in the mountain,
Between gentle breasts of fertile earth,
A clutter of buildings surrounded a fountain,
Brash and excrescent upon a replat,
Down the slope from the concrete cross,
Planted where a skier had died, and,
Which cast its shadow our window across,
When the autumnal wan morning sun,
Balanced upon the mountain rim,
Before it commenced its alpine run,
As they lay abed and quickly made love,
She with demand and he with compliance,
In the non-marriage bed with the virgin above,
Before a day of boredom and chalk and talk,
In the classrooms of the school below,
Where the social aspirants’ progeny walk,
With the children of the rich and famous.

Across the valley where the Alps were cleft,
With the chiselled and ancient signature,
Of the deep and patient wedge of ice,
Where the dark reached up from the valley floor,
While the blue dipped low from the frozen sky,
Like blood from a wound a rillet trickled,
Out of the cleft and into the Rhone.

In an assertive statement of intention,
Into Autumn, with a rapid incursion,
A preliminary of a full invasion,
One blustery afternoon, Winter,
Plummeted the daytime temperature,
And drove flocks of birds from the heights.
They, like a storm descending,
In an angry squall of wings,
Protested their disapproval,
Then with a twittering haste they vanished,
Diving low into the darkening valley,
To the lake that was milky and green.

Then to gather forces and regroup,
Winter withdrew for a week,
Before, with ferocious renewed intention,
She launched her full-scale assault.
She smothered the land with a blanket of snow,
And adorned eaves and shivering trees,
With a tracery of coruscating icicles.

To disturb our Saturday morning,
While the village was yet awakening,
The army Suisse invaded our slopes,
Like flies on a wedding cake.
That herd of citizen soldiers,
A collection of farmers and clerks,
Were taught how to kill,
While honing their skill,
At other warring games.

Their foolish games of war and sport,
Despoiled and scarred the carpet of white,
And the staccato crackle of gunfire,
Was a cackle straight from hell,
That shattered the mountain silence.

Winter quickly protested,
Her hypertrophied clouds unravelled,
Trailing translucent buds of snow,
That wove delicate wafting gauze,
Which syncopated multi-sonorous noise,
That radiated from the centre of action.
The bellow of raucous voices,
Vainly ebbed and flowed,
As the storm intensity grew.
Ignoring the warning from Winter,
The High Command persisted,
Desecrating the mountain landscape,
Till, in a fit of indignation,
With the determination of the affronted,
Winter made her strongest protest,
And the fury of her heavy assault,
Finally drove them from the slopes.