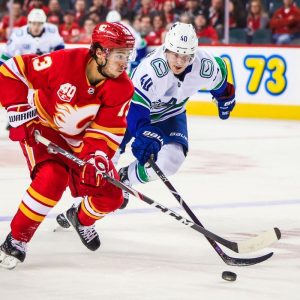 In January 2001, Barb and I saw the most exciting ice hockey game played between the Vancouver Canucks and the Calgary Flames in Vancouver, Canada. Hockey’s (they do not call it ice hockey) place in Canadian culture is closer to religion than to a simple sporting pastime. The sport is part of the national identity, a rite of passage between fathers and sons and, more recently, mothers and daughters.

For novices to the sport, the two teams have six players on the ice at any one time – one being the goaltender. In a regular match consisting of three 20-minute periods, teams try to play and shoot the puck into the opposition goal. Throughout the game, players can be substituted on and off the ice for tactical reasons. There are 23 active players rostered on a team.

Hockey has the fastest tempo in team sports. Endurance, agility, and speed (up to 32 km/h!) is the definition of this sport. And the pucks can reach speeds at 160km/h. As a spectator, there is an adrenalin rush watching the speed at which this game is played and the way that specialist players come on and off the ice within the period. Many of these players are only on for a minute or two.

To the novice, it seems like mayhem out on the rink, with the speed of action being breathtaking. It is a contact team sport, in which two teams of skaters use their sticks to shoot a vulcanised rubber puck into their opponent's net to score a goal. Hitting and physical contact is allowed but if the referee decides it is too violent then it becomes a two-minute penalty.

The crowd at Canada Hockey Place in Vancouver erupted in the first period when Jonathan Toews opened the scoring for the Canucks following an assist from Mike Richards. The excitement in the arena cranked up a notch when Corey Perry doubled Canucks’ lead in the second period. But the Flames re-grouped with Wayne Jourdain scoring, and got a foothold back in the game. Then, with seconds to go until the end of normal time, Jourdain again silenced the crowd with an equaliser to take the score to 2-2 and the game to sudden death. The tension was palpable.

The Canucks went back on the attack. Seven minutes into overtime, Toews exchanged passes with Richards and slotted the puck between the legs of the Flames goalkeeper for a brilliant goal, delivering a win that produced joyous celebrations across the city and state. The streets of Vancouver were filled with ecstatic crowds who celebrated their team’s victory well into the night. The win sparked joy across the whole of British Columbia and Toews became a national hero. It was an unforgettable moment.

We were caught up in the celebrations and soon realised that these Canadians are madder than AFL fans at a grand-final. Talking afterwards to the Canucks fans, we asked what happened to the opposition. Their bellowed answer: "You missed the boat, Jourdain!"