A light rapping on the caravan door awoke me. Staggering out of bed, trying not to wake Jenny or the kids, I glanced at the digital clock on the way and groaned, it was only 3.15am.

I could see a shadow through the flywire and turned on the outside lights.

Archie the foreman was instantly illuminated and stood there waiting for me to come outside.

"The Marrs pumps have stopped," was all he needed to say. With that gem of information passed on, he turned and headed home to his bed. (The Marrs pumps are situated on level 10, six hundred metres below. They pump water from the mine 24/7 and if they stopped the lower sections would rapidly flood.)

I donned a set of overalls, my hard hat, a heavy pair of boots and reached for my electrician's issue butchers bike. The bike was painted black with a red electrical sign emblazoned across it. This was my main mode of transport to traverse the mining lease. I often carried electric motors or large parts in the basket as I peddled between mining operations.

Tonight I'm tired. This has been my third call out. Each one requires me to peddle 2km to the gate and raise the security to gain entry. Then find a headtorch and battery that is charged, before riding to the headframe to call the winder driver to pick me up when he has emptied his next load of ore. The mine works 24/7 and, as ore was the priority, I had to wait around until he completed the extraction operations. It stops and I signal 10 levels and away it drops.

When the cage is pulling ore it is travelling much faster than when hauling men and the drivers are supposed to slow the winder down. They never do and a quite a rapid descent is always guaranteed with much bouncing as the cage cables stretch then contract before it stops at your level.

In the eerie artificial light I walk towards the pumps. Cracking and rumbling sounds are all around. At this time in the morning all alone down here they tend to spook me. It's as if the very mine is alive.

I reset the pumps and wait for access to the cage again, before re-tracing my steps back to bed. Hopefully? 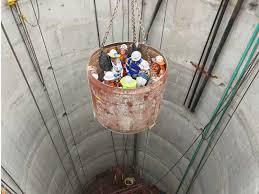 In 1974, Warrego was in the midst of expansion and the main shaft was being sunk another 6 levels (360 metres). This entailed running and fixing steel wired armoured high voltage cables to the sides of this new shaft. At this stage, there was no cage access. The electricians were required to stand on the rim of a kibble bucket. This was a steel bucket three metres round and two metres deep fixed by three massive chains to an air winch set up on level 10 above. We were lowered on a steel cable connected to these chains, often with water constantly running over us from the workings above.

To service the winder we were tasked with fitting bells and controls to each new level. This often entailed hanging out into the shaft with a lifeline attached to you to fit off cables. Very tricky some times. 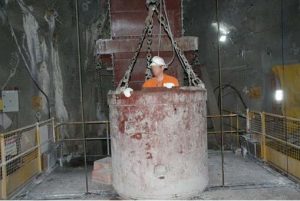 When we completed the preliminary works the winder was required to be halted while we disconnected the existing bell system and spliced in the new one. Three electricians working 23 hours straight completed this task and two of us remained to make sure it all worked when it was powered up again.

I was on level 10 when the winder began extracting ore once again.

Things seemed to be going well and I was just waiting for the cage to pick me up when a shadow fell across my headlamp.

It took a minute in my exhausted state to realise that it was fine dirt falling from the shaft. This was almost immediately followed by bigger stones then large rocks began to bounce out into the drive.

I found out later the winder had pulled away only half full and that the rest (three tonnes) came down the shaft.

I ran down the drive as crashing sounds followed behind me. I was soon passed by soccerball sized rocks bouncing off the walls and roof. Then an ear-splitting roar as an oxy bottle, its neck broken off in the melee shot past me like a torpedo. I managed to huddle into a switchboard cutout in the wall as a mass of detritus flew past.

I was finally lifted back out unharmed but shaken and rode my bike back to our caravan to tell Jenny.

"They nearly killed me", I said, before falling into a dead sleep. No call-outs after this.

Not for a few days anyway.

A shadow will fall across Peco Wallsend, its glory days will be finished by 1998. It will become subject to takeovers by Pasminco and North Broken Hill and finally gobbled up by Rio Tinto. Court battles with the WA taxation office and the department of Aboriginal affairs will see the company delisted in 1988.

The mining operations will cease and the complete site be cleared away by 1999. The smelter will be refurbished in 2002 and come back into production briefly until 2004 when it will close permanently and be dismantled.

In 2018, we were in the Northern Territory once again and drove out to the Warrego site. All that remains is the headframe with two huge wheels sitting forlornly atop, still now forever.

The smelter has completely disappeared as have the works area, buildings and the powerhouse.

Such is the history of mining.