Our Gentle Walking Group meets weekly at various locations within Nillumbik and Banyule. Most walks are easily accessed, with ample parking for all our members. However, there is one location, Banyule Flats in Viewbank, which can be a little difficult to find and, although the car parking area is large, it can sometimes be the site of other activities which can make parking a challenge. For example, a major schools cross country event was being held the first time that we visited. 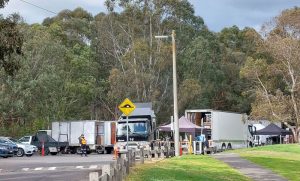 Another such occasion was on Monday, 15th August, where our walkers drove into the parking area, only to be apologetically turned back by a TV crew, who were filming on the oval beside the car park. To add to the confusion, parking was unavailable in the local street due to emergency sewerage works. Not to be deterred, our intrepid walkers parked in the few local side streets available and walked back to the starting point.

We had a beautiful walk along the Yarra River and decided that we would still have our outdoor coffee, as per usual, even though it involved quite a walk back to our cars for chairs and coffee. As we sat drinking coffee, watching the filming, one of the crew members kindly walked up to us and explained that they were filming an advertisement for a new Ford car and financial product. The participants included young children playing soccer, dressed in blue and white (of course), with their parents watching on the sidelines and, of course, a new blue Ford car. He explained that the target audience was young, up and coming families with a need for a seven seater four wheel drive vehicle capable of pulling a caravan.

Some of our number facetiously suggested that we could also perhaps be a target group as some of our number regularly towed caravans and that he might like to include us (as grandparents) in the filming. Unfortunately he didn’t take up our suggestion.