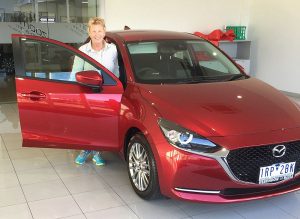 I am the proud owner of a lovely new red Mazda 2. Last week, I went out to my car to attend an 8.15am doctor's appointment. I thought that I'd get in early so that I didn't have to wait. Much to my dismay, my car would not start. I checked the gears, and all controls, to make sure that I had everything right, but it was not starting.

Worried that time was getting on, and not wanting to be late, I phoned a good friend to ask her to give me a ride to my appointment. A croaky voice answered the phone and I explained my situation. She just laughed – a lot. You see, two weeks earlier, she had been in the same situation with her car battery flat and had a 9.30am (much more civil time) doctor's appointment. She stopped laughing enough for me to explain that I really DID have an appointment, and my car really would NOT start. She had thought it was my idea of a prank! Anyway, although she admitted that she was still in bed, like the good friend that she is, she agreed to help me out. She picked me up from home, drove me to the doctors and then returned me home. We both couldn't believe that my two week old car would have such a problem. Had I bought a lemon?

Upon returning home, I called Roadside Assist and they arrived in around 25 minutes. A pleasant young man looked under the bonnet, hooked up some leads to the battery, and investigated. I gave him the keys so he could try to start it. I watched on eagerly. Then, he smiled and asked me if I had another set of keys? I did, so I went inside to grab the spare keys. Then it dawned on me: I had been using the spare key for my husband's car!! Of course it wouldn't start! That is surely the risk of owning two Mazda cars, that both have 'push button' start. Had it been a good, old fashioned actual key, I would have known immediately the error of my ways.

I sent the young mechanic on his way with a big smile about the silly blonde woman in Eltham who could not start her car.