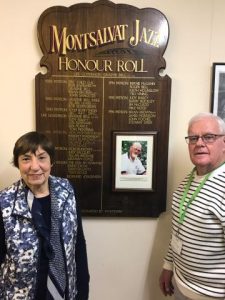 In late July, 21 of us undertook a guided tour of the Australian Jazz Museum, located at Wantirna. The museum has national accreditation to house the archives of all material relating to jazz music & performance, recordings and jazz memorabilia, both from within Australia and overseas. The tour included an hour’s live jazz performance by professional musicians, followed by coffee, tea and light refreshments. The tour was thoroughly enjoyed by all and a most rewarding experience for lovers of jazz music.

One of the historic pieces in the Museum’s custody is the Montsalvat Jazz Festival Roll of Honour. This contains the names of a number of prominent people, particularly musicians, radio personnel, patrons and one politician who were instrumental in various ways in the festivals held between 1988 and 1996. One notable omission was the name of the Founder and Principal Director of the Festivals, the late Mal Harrop, who was also the founder of the ‘Friends of Montsalvat’ whose membership now numbers several hundreds. The class presented a framed and suitably inscribed photograph of Mal to be attached to the Honour Roll. Mal’s widow, Val, joined the tour group (the photo on the right is of Val and myself).