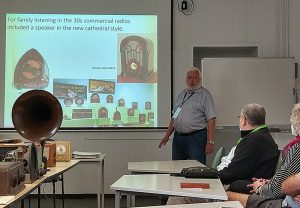 On 16th February, Graham Parslow, who is the president of the Historical Radio Society of Australia, gave around 20 of us a presentation on 150 years of radio, from scientific curiosity to mature technology.

Radios from the 20th century were illustrated by examples from Graham’s collection of 600 radios. It is likely that you grew up at a time when radio was a major home entertainment and fondly recollect that radio and the times your family spent by it in the kitchen or lounge. Radios are now highly collectable for their beauty and their technology, with the cabinets reflecting the tastes of society spanning art-deco to modern minimalist.