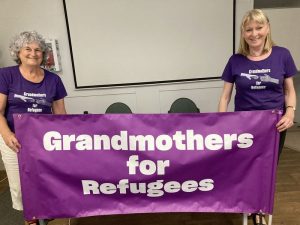 On 2nd March, Gillian Essex and Janine Laurence, from the Jagajaga branch of Grandmothers for Refugees (G4R), discussed the history of the movement, the issues facing refugees in Australia today, and the role of G4R in advocating for them.

(G4R) is a grassroots movement that has evolved from Grandmothers Against Detention of Refugee Children. With a large membership base across both the suburbs of Melbourne and in regional Victoria, G4R’s focus is the rights of refugees and people seeking asylum. Being a grandmother is not a pre-requisite for becoming involved, as G4R also welcomes the support of ‘friends of grandmothers’, affectionally known as FROGS. G4R also collaborates at times with other like-minded groups. In addition to their advocacy role, many grandmothers – either individually or collectively at branch level – provide direct support to refugees and people seeking asylum.