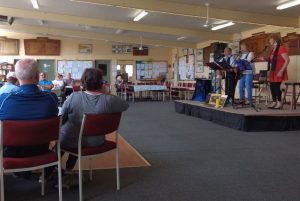 When you get to a certain age, some broad strokes of history become clearer. The post WWII baby boomers were the first ever generation born into an age when youth had a significant voice. That voice was loudest when raised in song. Bob Dylan wrote much of the script for the angst of a generation that saw what was wrong with the world in the 1960s. This earned him a Nobel prize for literature when hindsight showed how profound his words were (and continue to be). Peter Paul and Mary gave harmony and soul to many of the songs of faith, optimism and protest in the 1960s.

And so it was that a TARDIS from 1962 landed at the Eltham Bowls Club at 2pm on Sunday, 14th October. Out stepped a group titled The Don’t Think Twice Trio, aka Eric, Wendy and Janet. Eric teased perfect chords and arpeggios out of his guitar as Wendy added sonorities from her guitar. Janet surprised and delighted with her solo parts in a low register. In harmony they took us through songs that were mouthed in synchrony by the assembled audience of 60 souls, made young again as the song sheet of our youth flowed harmoniously around the hall.

Wendy treated us to some history that was a welcome guide to the context of the songs that we were hearing. Peter, Paul and Mary were formed in Greenwich Village New York in 1961. The trio was composed of tenor Peter Yarrow, baritone Noel Paul Stookey and alto Mary Travers (Mary Travers died in 2009 and Yarrow and Stookey continue to perform as a duo).

They recorded their debut album, Peter, Paul and Mary, in 1962. It included Lemon Tree, 500 Miles, and the Pete Seeger hit tunes If I Had a Hammer and Where Have All the Flowers Gone?. The album was listed in the Billboard Magazine Top Ten for 10 months, including seven weeks in the No. 1 position. It remained a main catalogue album for decades to come, eventually selling over two million copies. If I Had a Hammer and Blowin’ in the Wind came out of the 1963 March on Washington, best remembered for the Reverend Martin Luther King, Jr.’s I Have a Dream speech. The Bob Dylan song Blowin’ in the Wind was one of their biggest hit singles. They also sang other Dylan songs including The Times They Are a-Changing and Don’t Think Twice, It’s All Right.

The songs I would like to highlight for particular mention, as rendered by The Don’t Think Twice Trio, are Early Mornin’ Rain, 500 Miles, Don’t Think Twice, It’s Alright, Lemon Tree, Day Is Done, All My Trials, If I Had A Hammer and Blowing In The Wind. The excellent afternoon tea and drinks from the bar completed a memorable day.