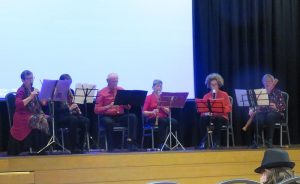 Eltham High School is renowned for its music education and contributed four of its most promising string players to create a classical chamber orchestra group of two violins, a viola and cello. The music began with a lively Latin melody, La Mariposa composed by Lorie Baum. A more sedate selection of tunes followed, including part of a J.S. Bach concerto. The Eltham students finished with A Gaelic Overture by David O’Fallon. Allowing for the age and experience of the performers, it was a delight to see these potential virtuosos performing for us.

An ensemble of six far more mature players took the stage next to entertain with their recorders. We were told that we may have acquired an aversion to the humble recorder from indifferent experiences in primary school (and there seemed to be general agreement to that assertion). So it was that the Deepdene Dashers, named after the veteran train that served Deepdene for many years, took to their recorders to show us a quality of music that we may not have anticipated. The group were playing recorders that covered bass notes through to high treble. An outstanding item was a rendition of Calliope, a piece composed to mimic the timbre of the unusual Mississippi Steam Organ.