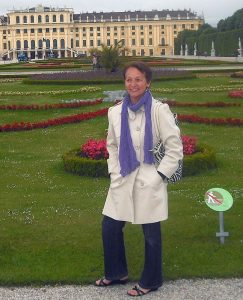 Therese has lived locally (Eltham and Watsonia) for many years and has been an active member of Nillumbik U3A since its inception.

She was born in Southern Italy and, when she was just three years old, her family moved to north-east France. Later, during her teenage years when she was 15 years old, they made another move – to Australia.

On arrival in Australia, Therese commenced working whilst studying by correspondence to complete her secondary schooling – a challenging path for a young girl in a new country. She eventually completed her VCE at night-school and then, at the age of 47, entered university as a mature aged student. She studied natural medicine and qualified as a Naturopath.

As well as tutoring French, Therese is currently a member of our walking group and a keen games player who participates in our card playing groups and Mah-jong sessions.