This profile was written by Brian Mclean in 2014 Term 4. 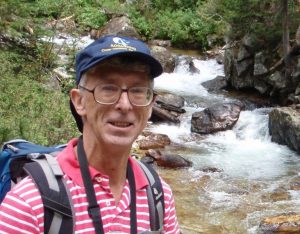 Rob Gardner is the enthusiastic organiser behind the very popular Monday morning walking group. The group now averages about 20 each walk and has over 30 mapped walks within Nillumbik Shire; each one walked in advance by Rob. Rob aims to have 50 walks in the group’s itinerary. He has also tutored a sustainable homes course and plans to repeat it in the future.

If you had only three descriptors for Rob’s lifelong passions they would be; all things outdoors, sustainability and social conscience.

Rob was born in Tynemouth, Northumberland and after completing his Minerals Engineering degree in 1968, migrated to Australia. With his brother he travelled through Asia on buses and trains to take up a job with CRA in Broken Hill. It was in Broken Hill that he met his wife Colleen. They have four daughters, Annie, Kate, Liz and Claire and two grandchildren Georgie and Charlotte. He stayed with CRA until 1972, including almost a year in Iran.

He returned to England to complete an MBA at Cranfield, Bedfordshire in 1972-3. The downturn in the mining industry led Rob into the Manufacturing Industry in various financial and technical roles where he spent the rest of his working life; the last 30 years until retirement in 2009 with Cadburys. His work with Cadburys involved work in many countries and so his love of travel and interest in other cultures was enhanced. As well as travel it would come as no surprise to learn that Rob’s love of the outdoors continued throughout his working life. Trekking, rogaining ( a sport of long distance cross-country navigation up to 24 hours in length) and canoeing helped fill in his leisure time.

His financial and outdoor interests and expertise have only intensified since his ‘retirement’. His voluntary work with the Alternative Technology Association (ATA) in East Timor has now branched out into work with the Indigenous Community Volunteers (ICV) here in Australia. These organisations respond to requests for assistance from local communities, and volunteers with appropriate skills are sent to meet their needs. Rob’s technical knowledge of alternative energy sources as well as his financial expertise means he is kept very busy working in these isolated communities.

At the time of writing Rob is preparing his back pack and is off with a couple of friends continuing to trek another section of the 660km ‘Australian Alps Walking Track’.