An interview by Judy Vizarri in July 2018. 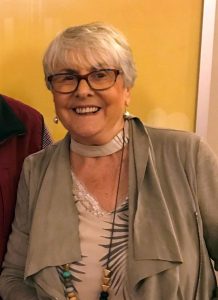 Lyn Colenso is a new Nillumbik U3A tutor whose class is singing.
"Five foot two, eyes of blue
But oh, what those five foot could do …"
Sam M. Lewis and Joseph Widow Young

So the song goes and there's just a chance that, although her eyes are hazel, not blue, it's sung for Lyn Colenso.

Who is Lyn? She's a Melbourne girl, born and bred in Balwyn. She's also a new Nillumbik U3A tutor. I've just spent some time getting to know her and I'm impressed with her vitality and will to continue her journey in a life seemingly peppered with ups and downs. She is, she says, "a people's person and a captain of my own ship."

Lyn isn't abashed by a crowd, in fact she loves to perform – our meeting was a musical one during which I was treated to snatches of some familiar songs sung in a bold alto, a voice which she describes as akin to Liza Minnelli or Judy Garland, a voice which I'm sure has delighted many listeners.

Although Lyn has sung all her life, she told me, rather ruefully, that during her youth she was "rejected after auditioning for the school choir." So, much later in life even though she had the interest to sing publicly, she wasn't sure she had the ability. To find out, she commenced singing lessons with Brian Copple and it seems his answer was 'yes'. Since then, she hasn't stopped singing on stage and off.

Ten years ago, Lyn joined a singing group in Camberwell and remained an enthusiastic member of that group until recently. But Camberwell is a long way from Kangaroo Ground (where she now lives) and the constant travelling finally convinced her that it was time to withdraw from the group, but not to give up singing. She sought alternatives and her search led her to our U3A community, which she has joined as a member and tutor.

Lyn will commence her U3A Singing Group on 25th July and already there's plenty of interest – enrolments are brisk. "The more the merrier," she says, but "up to 30 for starters!"

While remembering my own early experience having to sing in a high school music class so that my voice could be graded and I could be 'placed' in the group according to the result (terrifying!), I asked Lyn how her sessions would be structured. I was relieved to hear that that's not what she's planning at all; hers will be an informal class, a place for people to come together to sing and to experience the amazing vibes which group singing provides – she says, "when I'm with a group where everyone loves to sing, the energy is enormous!."

Giving pleasure will be a pleasurable activity for her. So, no auditions or classifications, no altos, basses, sopranos or tenors will be identified (although they're all very welcome). Instead, Nillumbik U3A members can enrol to participate in weekly sessions at the Eltham Lower Park Pavilion each Wednesday morning, 10am to 11.30am to sing their hearts out and, in short, to have fun.

So, go on a musical journey, sing the songs sung by Cole Porter, Frank Sinatra, Abba, Liza Minelli, Tony Bennett, Judy Garland and Carole King and many others and inject high spirits into the cold winter months.