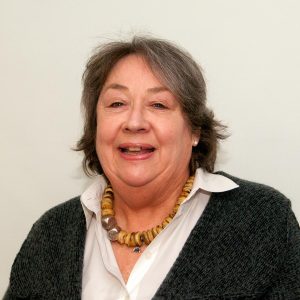 When approached to be the next tutor to participate in our Meet a Tutor profiles, Lou protested that the details of her life would read as ‘boring’. I am sure you will agree they are anything but boring!

Lou was born and bred in Bendigo. She was educated at Girton Girls Grammar and Bendigo High School. After leaving school she trained as a General Nurse at the Alfred Hospital and later nursed at the US naval hospital in Italy.

As everyone does she married an Italian in the early 70s and then qualified as an Italian Charge Nurse. Still pursuing her nursing career she became Director of Nursing at the Naples Nursing Clinic and established the first psychiatric nursing school in Italy.

In the 1980s, she had two sons, one of whom resides here and one who is in Italy.

While in Italy, Lou tells a story about her visit, guided tour and 5 star dining experience aboard the Aircraft Carrier USS Nimitz which was organised by her neighbour, 6th Fleet Vice Admiral Martin. All this came about as a result of a caesarean on a dog! Intrigued; ask Lou about it.

Fifteen years later Lou returned to Australia and embarked on a new direction in her working life. She completed a BA in Social Sciences at La Trobe University and became a Lecturer in Sociology at Monash Gippsland at the Churchill Campus.

She moved to Eltham in the early 90s and enrolled in an MA in Criminology at Melbourne University. To compliment this life of nursing and academia she then opened a small café in Canterbury; an experience she describes as successful but “I have never worked so hard for so little reward”.

In 2012, when the Steering Committee for a new branch of the U3A was formed, Lou was an eager participant and has remained so to this day. She has run tutorials in Italian and Bridge and, as a U3A Committee member, has been responsible for sourcing suitable premises for classes. Her current aim on the Committee is to lobby Council for a permanent U3A home.

In her other life Lou needs more time to travel to Italy to see her grandson and new grand-daughter (who will have arrived by the time this item is published). When grounded at home her passions are local politics and keeping Eltham green and leafy.

All that needs to be said to round off this ‘boring’ Meet the Tutor is “Go Doggies”.

How the girl from Bendigo developed a passion for the Western Bulldogs is another story.