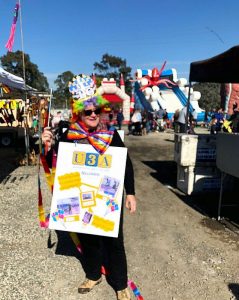 Did you know that it is ten years since Hurstbridge resident, Sabi Buehler, began the process of establishing Nillumbik U3A? She was joined by Laraine Hussey (who took on the role of Secretary), Colleen Gardener, Donna Kilgour, Doug Rutherford, Jill Holmes, John O’Connor, Suzanne Hay, and (a little later) Brian McLean. The first classes began in 2008 at the Community Centre in Hurstbridge.

This was the first outing for our new promotional video produced by Judy Vizzari (thanks, Judy!), which ran all day on a loop and showcased some of the courses on offer. We were able to display posters about our activities and chatted to the many visitors about our U3A.

We were determined to capture the interest of as many folk as possible so one brave, creative member (Gail Clayton) donned a sandwich board and eye-catching wig and wandered around the festival area. She certainly was noticed and she distributed our new brochure designed by Henry Haszler (thanks, Henry!). 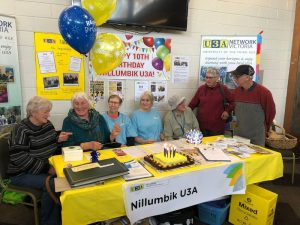 At noon, we sang ‘happy birthday’ and a cake was cut. It was fitting to celebrate the birthday at Hurstbridge Hub because that was where the initial meeting to start Nillumbik U3A took place (then called Hurstbridge Community Centre).